This is what she gets paid to do? 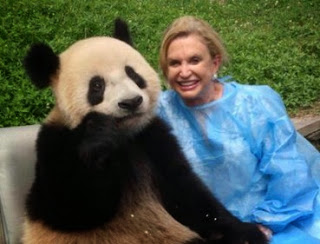 A Manhattan congresswoman is accusing Mayor de Blasio of not supporting her efforts to bring two pandas from China to New York City.

In August, Rep. Carolyn Maloney visited panda preserves in China with hopes of bringing two of the bears to the Central Park Zoo. After the trip, Chinese officials asked for a letter from the mayor or governor supporting her plan, Maloney said Sunday morning on John Catsimatidis’ radio show on AM 970.

She then approached Gov. Cuomo who sent a letter earlier this month in support of bringing the pandas to the Big Apple, she said. She is now awaiting a response from Chinese officials.

According to the New York Post, though, a city official said that neither the Central Park Zoo nor Bronx Zoo were interested in housing the pandas, which are "incredibly expensive to maintain."

A spokeswoman from the mayor's office said regarding Maloney's pandas there were "more pressing concerns for New York City at the moment."

Did the taxpayers get the bill for her trip?

Give the pandas EBT cards and sec8 housing and voting rights they will fit right in.

This woman is not the sharpest knife in the drawer. Did nothing for Queens but tear up Dutch Kills for a tunnel serving Long Island.

that radio station is owned by a right-wing religion outfit (Salem). In some dayparts is has fewer than fifty listeners.

More people read about it here than heard it there.

I believe she meant pander, not panda.

New York is famous enough as it is. Our city does not need the Olympics, the ferris wheel, East River gondolas or great pandas to attract tourism.

Is there not one of these idiots who won't spend us into the poor house like drunk sailors on shore leave?

How about the money comes out of legislators/council members/community board members salaries?

How about some relief, at long last, for the preyed upon taxpayer!

If you want to see a panda go to Washington DC. Better yet, rent the movie Tropic Thunder. See Ben Stiller kill one and wear its pelt!

A panda walks into a restaurant, sits down, and orders a sandwich. He eats the sandwich, pulls out a gun, and shoots the waiter dead. As the panda stands up to go, the manager shouts, "Hey! Where are you going? You just shot my waiter, and you didn't even pay for your sandwich!" The panda shouts back, "Hey, man, I'm a PANDA! Look it up!" The manager opens his dictionary and reads: "Panda: a tree-dwelling mammal of Asian origin, characterized by a distinct black and white coat.
Eats shoots and leaves."

Make the pandas members of Congress. China has too much influence in America already. We get flooded with their cheesy defective and dangerous products which put American workers out of jobs. Put Maloney out of her job.

They belong in the queens zoo close to Flooshing, already an Asiatic offshore colony.


Would she like to be taken away from her native and comfortable environment to travel to the other side of the world to get caged in order for people to see her?
Freedom is priceless, so its stated in our declaration of independence and constitution and this also applies for animals in my book.

Miss Maloney is worth $28 million,
A True 1 percenter,
Shhhhh listen when she Speakes you ignorant little people.

I agree with the last statement. She's worth millions. Why has she been in public service for so many years? Probably because it's lucrative and she can make even more money through special interest groups and fleece the taxpayers for her expensive trips. With all the problems this city faces, her big issue is Pandas for New York. I think dementia is setting in. She is truly a one percenter (most politicians are), but will tell you the story of the tale of two cities. She's been around long enough. Time for her to retire to Palm Beach. This is why ALL politicians should be term-limited.

She's pandering for the Asian vote...obviously.

Her family owns a major distillery in Ireland and coffee processing plant in Brazil. They are flush with $$$$$$$.

Instead of worrying about the small s..t.

Goggle the John Birch web site. The John Birchers are scarier than the Klue Klux - hate everyone who does not look or think like them. Had a dinner party in the early sixties and when I asked a guest what they believed in or are against out of his mouth came the N word, Paptists, etc. I opened my door and told him no one uses those words in my home and here is your coat.

We all know the Koch brothers have bought the last election and therefore the government and our country. What family for three generations has suppported the John Birchers? THE KOCH FAMILY.

How did a stupid post about Carolyn Maloney lead to the Koch Brothers? Seriously...

The Kock brother's the Koch brother's
Stupid liberals,yet their hero's are guvera, Stalin,Marx,Obama and do Blasio, total losers and anti American OWS Drones,Happy new year comrads, may your panty be full of powered milk and stand!e bread and may you have to fight the Roaches for your ration 👮

Yes the post re Maloney is stupid. I was trying to direct people to check out more important info re elections and I end up being shot down from the last person I expected it from.

That panda looks better than her.

China has a one-child policy. If they kill newborn humans, they can kill pandas.

It would be great to have a new Congressperson for my district but who could defeat her base (more importantly, her base' bank accounts) on the Upper East Side?