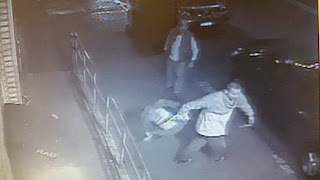 The two men who trashed part of a World War II memorial in Woodhaven while in a supposed drunken haze have been caught, according to community leaders.

The post states that the two men are "unfortunately" Woodhaven residents.

And in other positive war memorial news, the Captain Malcolm Rafferty monument featured in this post has been restored by NYC Parks and Newtown Historical Society.
Posted by Queens Crapper at 12:24 AM

I wish someone would post their names and addresses.

The Captain extends his regards to the boys of the 102nd Precinct for some excellent police work.

"These two may be from Woodhaven but they are NOT Woodhaven People,"

Mais oui, this is regrettably so, and even though the Captain's English is not so good, he can read between the lines and understand the meaning of this sentence.

The Captain would like to remind all Queens residents as usual:

Off with their heads!!