It even happens in Manhattan 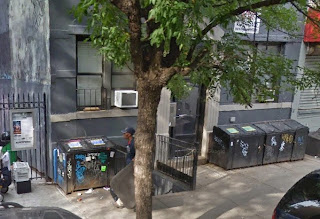 An author and part-owner of Gowanus' Lucey's Lounge was found dead inside her burned-out basement apartment Wednesday morning three weeks before she was scheduled to move out, relatives and officials said.

Evelyn Dahab, 33, who planned to vacate after "a painful legal dispute" with her landlord, was discovered inside the apartment at 31 E. 1st St., near Second Avenue, about 3:15 a.m., after a fire tore through it, according to the NYPD and her family.

Dahab's body was found after about 60 firefighters brought the blaze under control about 30 minutes after they arrived, officials said. She was pronounced dead at the scene.

Neighbors in the apartments above raced down the hallways, banging on everyone's doors to rush them out of the building, said first-floor tenant Chase Chemero, 25.

The fire was sparked by an overloaded electrical circuit, according to the FDNY.

Now as you can clearly, see, there is no "basement" in this building, but a cellar. According to the 1954 C of O, this "cellar apartment" is legal under the old law tenement. Now you understand why they changed the law.
Posted by Queens Crapper at 12:23 AM

technically it was not designed to be rented for public use it was for a live-in super...most supers had apartment #1A