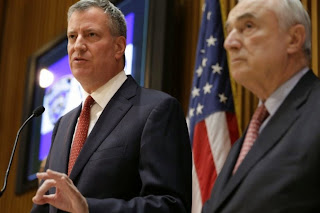 The letter, signed by over a dozen grass-roots organizations, including Black Lives Matter and Brooklyn Movement Center, charges the NYPD with attempting to silence the protests of those “seeking justice for victims of police violence,” as well as “reckless attempts to conflate constitutionally protected protest activities with the tragic murders of officers Ramos and Liu.”

On Monday, de Blasio and Bratton held a press conference inside the police department’s Manhattan headquarters, asking that protesters put on hold their demonstrations against police brutality in the wake of Garner and Brown’s deaths. For weeks, they have marched through city streets and staged peaceful protests to call for reforms in how police interact with communities of color.

“Let’s just focus on the families and what they have lost. I think that’s the right way to move toward building a more unified and decent city,” said de Blasio.

“We’ve responded by meeting in our homes, offices, and school—and walking out of them, with our hands up. Thousands of others have organized small actions that when woven together have tremendous impact. The problem isn’t the diverse voices that participate in dissent, a cornerstone of our democracy,” the letter stated.

The activists asked those “who stand on the side of justice to join us.”

While there have been a number of vigils held for the police officers by protesters in the last few days, today saw the continuation of protests against police use of force. A group of youth protest leaders in New York rallied in Union Square on Monday. Another group intends to hold a press conference Tuesday announcing plans for a New Year’s Eve protest.

Boy, this guy just can't make anyone happy lately.
Posted by Queens Crapper at 12:43 AM

If de blasio doesn't make up with the praetorian guard soon and give them the raise they want history tells us what will happen to him soon enough.

Oh god forbid anyone tell the protesters to not block traffic, vandalize property, and run around like morons for a week. These protesters need to become productive members of society, get a job, and stop the nonsense.

Again The NY Times gets it wrong. From yesterday's editorial:

" The answer to violence is love, as reflected in a statement from the grass-roots group #BlackLivesMatter deploring the officers’ killings and calling for “a complete transformation of the ways we see and relate to one another.”

Oh god forbid anyone tell the protesters to not block traffic, vandalize property, and run around like morons for a week. These protesters need to become productive members of society, get a job, and stop the nonsense.

Oh please, for the most parts these protests have been peaceful in New York, yeah there were a few incidents, but the majority were peaceful and to make it otherwise is as bad as saying all police are bad and that all black men are targeted by police.

In this country we have the right to protest and most protestors have jobs and lead productive lives in society.

The problem is that the protesters are targeting the wrong people. The reason cops get away with it is because of district attorneys and lawmakers who write the grand jury rules, not the cops facing justice.

Let's go back to square one. Did de Blasio teach his Afro-headed son not to snatch smokes and manhandle convenience store clerks before alerting him to be wary of the police?

THOU SHALT NOT STEAL.

Did de Blasio teach his Afro-headed son not to constantly disobey the law and sell untaxed cigarettes on the sidewalk before alerting him to be wary of the police?

RENDER UNTO CAESAR THE THINGS THAT ARE CAESARS.

How do I know? The Bible tells me so.

Go back to square one.

Incidents? Try using the correct word, Attacks. Attacking two lieutenants for stopping a CUNY professor from throwing a garbage can off a bridge atop other police officers, attacking a traffic vehicle occupied by agents and breaking it's windows, chanting death to police officers, disobeying safety instructions, etc..

Perhaps the protestors should march in Bed Stuy, Harlem, Jamaica, South Bronx, Morningside Heights about the black on black crime which is absolutely horrendous but the racial agitators never organize those marches. Can't get their publicity there. So let the black mom's bury their kids shot in drive-bys, stabbed in hallways, beaten over a dis or dirty look. None of this matters because the networks don't do black on black. IT doesn't sell ads on cable TV.

You have any proof that he didn't, George?

"You have any proof that he didn't, George?"

Maybe de Blasio did, maybe he didn't. But it seems to me if the black youth Brown and Garner hadn't stole the smokes and sold the loosies - if they had obeyed the law and moral authority - they'd be alive today.

Jeezus Christ, alot of folk are all so metaphysically fucked-up.

Considering the path their lives were following, they might not have been.

"Jeezus Christ, alot of folk are all so metaphysically fucked-up".

Understatement of the week!

AP release, hands up assasin Brindsley found with multiple $100 bills,no job,WHO SUPPLIED THE GUN?
WHO ARE HIS CO CONSPIRITORS, THE HISTORY OF THE GUN IS BEING KEPT SECRET.

Exactly Queens Crapper! And add to that all those who make the policies (i.e., step up enforcement on sales of untaxed cigarettes).
For all the, "this isn't about police officers, it's about policing policy," these protests have taken a decidedly anti-officer edge. And that's a shame.

The police are the executors of the policy being protested. If they were so opposed to those policies they would be on the street marching with the protesters. But they're not. The police rank and file agree with broken windows. Are they so innocent then? They've marched to address their grievances before.

Where are they now?

Al Sharpton is not Black America's Saviour, Rev Al is their 9/11.