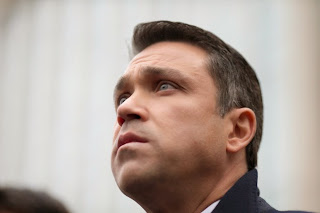 Mr. Grimm, a Republican, confirmed late Monday night in a statement that he would resign from the House of Representatives effective January 5. The resignation comes after he pleaded guilty last Tuesday to a single count of felony tax evasion at a restaurant he owned before running for Congress.

“This decision is made with a heavy heart, as I have enjoyed a very special relationship and closeness with my constituents, whom I care about deeply,” Mr. Grimm said. “The events which led to this day did not break my spirit, nor the will of the voters. However, I do not believe that I can continue to be 100% effective in the next Congress, and therefore, out of respect for the Office and the people I so proudly represent, it is time for me to start the next chapter of my life.”

Dan Donovan is considered the strongest candidate to replace Grimm.
Posted by Queens Crapper at 12:45 AM

Grimm. Bully. Thug. Attempted to throw reporter over the rotunda balcony, 7 stories high. Cheated our government by not paying taxes. You play by the sword, you die by the sword as the old saying goes.

SO typical of these flag-waving republicans. Tax cheating. "Illegal" immigrant employees and lying to his constituents. A real degenerate.

The morons out in S.I. would probably reelect that thing yet again.

Why didn't he resign before the end of the 2014 year? are there retirement benefits for serving the extra 5 days in 2015?

The morons out in S.I. would probably reelect that thing yet again.

Yeah, because us voters in Queens are just sooooo much more enlightened than those uninformed rubes in Staten Island!

house speaker snooki boehner suddenly decided to take action,citing that behavior like grimm's will not be tolerated.he Didn't seem to mind when the tax cheating,wage stealing and illegal immigrant enabling pile of shit was trying to get re-elected

of course the establishment limo-lib pussycrats had to prop up a moron that couldn't beat a guy under indictment.

there are just no sides to take anymore

if donovan is a favorite he better be honest.


the g.o.p. are summoning the equivalent of that dope the dems pushed in november,
another establishment shithead with the notoriety to boot.are staten islanders trying to have daily protests and potential riots?They better expect it

hopefully,because of his stupid decision in the garner trial procedure,he'll probably crack from all the attention from all the protests that this will cause.Or maybe,like many in congress,he's another sociopath who sees nothing wrong in running and would fit well with the other skells in d.c.

If you speed in a construction zone you have double the fines/penalties.

How about double the fine/sentence if you are a public servant and abuse the public trust? How about your salary/job are forfeit if you are guilty?

How about you pay all court costs to throw your thieving carcass out of office?

How about we hold them to a higher standard?

"Attempted to throw reporter over the rotunda balcony, 7 stories high." Bullshit he Threatened the "Reporter" threatening and "Attempting" are very different...

"Cheated our government by not paying taxes"

Even more bullshit the concept of "Relative filth" can be applied here. Rangel did the same thing and he hasn't resigned.

Filth is not relative. Filth is filth. Too bad Grimm won't serve time - we'd see just who get "broken like a boy." This guy's so bad the Marines are disavowing him. Hooyah!

He was not convicted of a crime he committed in office.

Watch for Reverend Al to start riots against Dan Donovan's run for this seat. I can hear the chanting now.

"Rangel did the same thing and he hasn't resigned."

Charlie held a very senior position in the democratic controlled house and he had protection via Obama, Pelosi and the rest of the dem leadership and he had a pocketful of chits to call in from 40 years as a rep.
And he was of the right complexion, if you know what I mean.

Who gives a shit about his "spirit". He is a felon. He threatens people. He should be in jail.

"He is a felon. He threatens people. He should be in jail."

Kinda like a political throwback to the 19th century.
Does Andrew Jackson come to mind?

Yes, lets elect as many thugs as possible....

The resignation is probably part of the no-jail deal and he probably also agreed not to seek re-election.

What? No jail tine? He committed a Federal crime!

another traitor to the anti-Marxist /progressive politics in the U.S.