This will send tourists flocking here! 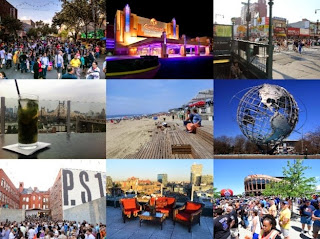 Move over, Manhattan — Queens is the must-see U.S. destination of the coming year, according to a leading travel guidebook company.

The borough has made it to the top of the list of Lonely Planet’s Best in the U.S. 2015. Selected by Lonely Planet’s authors and ranked by its U.S. editors, the list consists of 10 perennial favorites, places with timely reasons to visit and understated destinations that are ready for their time in the spotlight.

“I’ve seen how Queens has transformed from one of the forgotten boroughs to one of the exciting places to visit,” said Regis St. Louis, coordinating author of Lonely Planet’s USA and New York City guidebook.

This year was the first time that Queens made the annual online list, which was released on Wednesday. The rankings expand on Lonely Planet’s “Best in Travel 2015” guidebook, which came out in October, and chose Washington, D.C., and Rocky Mountain National Park as its top city and regional picks among world destinations.

St. Louis, a 14-year New York City resident, who currently lives in Brooklyn, was one of several authors to nominate Queens for the Best in the U.S. 2015 list.

It was clear from our passion and our feedback about Queens that it should be number one on this list,” he said.

To mark Queens topping the Best in the U.S. 2015, Lonely Planet is giving away the Queens chapter from its recently released New York City guide as a free e-book until Feb. 1, 2015. To get the free download, visit www.lonelyplanet.com/queens-ebook.

I suggest you download the chapter if you're up for a good laugh. The same handful of touristy Queens locations is listed that you will find in any NYC guidebook, and the hotels they suggest you stay at are mostly in Manhattan. Yet the Queens press and pols are acting like the borough won the Nobel prize. Well, except for the Chronicle, which had this to say:


Yes, Queens has plenty to offer and we’re glad to see it touted as a place to visit. But whether it’s “the best tourism destination in the United States” is, well, open to question. We doubt the decision-making process here was exactly scientific. Other major travel destinations we bested include North Conway, NH and Duluth, Minn. Awesome! Expect to see this designation milked for all its worth, and then some. And then go about your life as you did before you learned this bit of “news.”

I don't see anything that I want to visit here at all. The only thing to see here is how third worlders transformed once nice neighborhoods to make them look like a third world filth holes.

Melinda Katz was behind this. Just saying.

Despite it's cheesy politicians and lousy government,shitty streets, crime rates that are increasing at a declining rate. I'm always proud to tell other folks, when I travel, that I'm FROM Queens...

10. With all this global attention to our borough, expect your rents to triple.

9. Brooklyn has Marty as its loudmouth cheerleader, we have Curtis Sliwa. I head he sleeps and showers in his red costume.

7. We have plenty of affordable hotels in our borough, in fact they're free if you're homeless. The tab's on us, comes with a movie screening for children.

6. As a matter of fact, while you're here on a tourist visa, go ahead and enroll your children in our public schools. Again, all expenses on us.

5. Some our top architectural marvels: the LIC Clock Tower- soon to be demolished, the NYS Pavilion- still abandoned, the Willett Farmhouse at Fort Totten- still in ruins. Bowne House- reopening day to be determined.

4. You can't get from central Queens to southern Queens by train because NIMBY oppositoon to the LIRR Rockaway Line. Ditto for a subway to LaGuardia Airport.

3. Our biggest selling point is diversity. Big effing deal- every major city on this planet has diversity. The other four boroughs as well.

1. The Mets. Come to the old ballgame to watch your hometown team clobber ours. A sure cure for the homesick blues.

B. Thordis Adalsteindottir's 2013 work "Bear Easts Man" at Socrates Sculpture Park. While Frederick MacMonnies' Civic Virtue is offensive to our politicians, the bear with a full erection is protected speech.

C. In Australia, tourists can scale the Sydney Harbor Bridge. Don't even think about sanctioning such tours on Hell Gate Bridge. Insurance and lawsuits. Forgetaboutit.

D. We had 5 Pointz, but shiny glass condos are more inportant to our borough.

1. I hereby declare Nicki Minaj as our borough's top living sex symbol. She is the product of a working class background, and an alumna of our city's top public talent school (my alma mater LaGuardia High School) Her tattoos come in many languages. Diversity!

2. Queens Museum has the entire city inside it. You can take a tour of the Five Boroughs without moving an inch, so why leave Queens at all?

3. Forget Stabucks. In LIC, we have Sweetleaf. Founded by a Queens resident. Staff gets your name right because they recognize diversity.

4. Brooklyn Beer? Nah, we have three breweries in our borough, the oldest being Rockaway Brewery. Founded by two Queens residents.

5. Williamsburg's Radegast Hall has the appearance, but Astoria's Bohemian Garden has the history and outdoor concerts.

7. Citi Field. Despite its name, it appears much less corporate than Yankee Stadium. The fan base rolls with the punches.

8. Not only do we have three female borough presidents in a row, we also have the city's top female pizzerista- "Mama Gianna" Cerbone-Treoli of Manducati's Rustica in LIC. That's why we're called Queens.

9. Plenty of haunted history- some of the county's biggest mobsters, jazz stars and Harry Houdini are buried here. More dead residents than living ones.

A. Our best Italian ices are such a long walk from the subway, it guarantees that only local residents will eat there. So don't expect tourists to create long lines at the Corona Ice King.

this whole thing is just a shill piece for developers to start priming the pump of gentrification.

Gotta get that marketing hype going!

the surfers are calling Rockaway - Stayaway.

unsafe conditions at the constant construction site formerly known as a beach.