NYPD is the wrong target 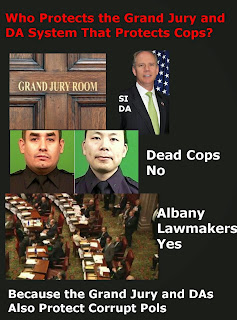 Why Did the Protesters Go After the Cops When It Was Elected Officials That Control the Prosecutorial System That Let the Garner Chokehold Cops Go?

Community activist Tony Herbert who introduced a family member of officer Rafael Ramos, said it the best: elected officials are using the cops, turning the community against them.

Herbert also has complained about why the cops are forced to deal with people who have mental problems, when it was the elected officials who have not properly dealt with that population. Police did not cause bad schools, high black unemployment, homelessness or the inequities of the criminal justice system that puts male blacks in jail at a much higher rate, elected officials did.

In other words, he says, the pols use the cops. Yet they have to deal with the problems that are created by government failure. The pols have escaped any blame with the Grand Jury system which they control. It was the Grand Jury run by the Staten Island DA Donovan that failed to indict the cop who put the chokehold on Garner. Yet the words out of de Blasio, Sharpton and dozens of elected officials many, who have a say on how the state's prosecutorial system works, have all been directed to blame the cops.

Peace on Earth, goodwill to men.
Posted by Queens Crapper at 12:40 AM


"cops are forced to deal with people who have mental problem"

Can anyone tell me what "force" is being applied to the cops ?

To my understanding, they get PAID to do the tasks at hand ?

Just as nobody "forced" Eric Garner to sell untaxed cigarettes or forced to him to resist arrest.

It is of their own volition that they do these actions...

Meter maids are given printouts each morning of expired registrations and your home address and like rabid Gog's hunt your car and ticket you,wake up.

These infractions are known to happen at a certain rate, and cops have discretion as to whether they will crack down on it unless the chain of command threatens them with charges of dereliction of duty.

"cops are forced to deal with people who have mental problem"

Because crackpot leftists see mental institutions as a weapon of the state and corrupt politicians don't want to pay for them, people are released onto the street.

What do you not understand?

You do know cops also get penalized for certain things also. That is part of the force.

"Why did protesters go after the cops?"

Because they're too stupid to understand how the grand jury process works.

Because they're too stupid to understand that the witnesses in the Mike Brown case originally lied and it's been proven that he did not have his "hands up" and that he was not shot in the back.

Because they're too stupid to see that Garder was not in a choke hold, and that he had a heart attack from the exertion he used to try to get the cops off him.

Because to the protesters cops = someone stopping their thieving, thugging ways.

These are all individuals with criminal background or involved in illegal activities, all on the left, more precisely communists. If you are familiar with the communist propaganda and their symbols you will recognize that immediately. In the time of communism, Lenin/Stalin, the Bolsheviks committed and instigated to murder in the name of "justice" .After they took the power the hired all the murders, rapists, etc as police officers by killing the real police officers. That's the plan of these individuals who protest against the NYPD and in general against the law. What's really scary is the political endorsement they get from the highest level in this country.. De Blasio is a known communist but and the New Yorkers should have known and understood what that means. Due to their historical ignorance now they have such mayor...and NYC is becoming exceptionally corrupted and violent..

That's wrong to go after the police.