Merry Christmas from the Queens Machine! 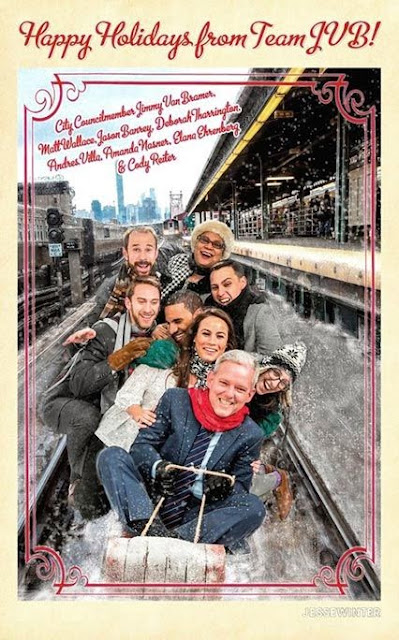 This card is real.

This card is not.

But the winner for holiday messages has to be John Liu.

Hey folks, he wasn't serious about running against Tony Avella, he was just "dabbling" in politics! I bet the moronic Queens County machine and its minions were just thrilled with this holiday greeting from Johnny.
Posted by Queens Crapper at 12:51 AM

Columbia University and CUNY, the time out corner for failed democrat politicians.

I'm so not impressed with a Christmas card from Jimmy Van Bramer (purported chair to the arts committee), whose staff and self blew my organization's efforts (Civic Virtue Task Force) to demand fair and honest treatment in returning the statue entitled, "Triumph Of Civic Virtue" back to its home base of nearly 70 years, and to permanently restore and conserve the fountain base on Queens Boulevard, upon which it was prominently displayed--despite years of intentional neglect by a recalcitrant Helen Marshall (good riddance to Queens trash), which was sinfully negligent, because of her personal, knowingly false beliefs that Civic Virtue was sexist and misogynistic. Now, both Van Bramer and Elizabeth Crowley have remained silent and tone deaf regarding the return of Civic Virtue from its temporary home at Green-Wood Cemetery in Brooklyn (the lease is up next year, incidentally), and taxpaying residents like me who funded more than $100,000 for the statue's cleaning and conservation want it back where it has always belonged--despite BP Melinda Katz's plans to turn the Plaza into a tribute (and planted ruin) to her version of accomplished women in politics--which no one asked her to action, nor ever wanted. In conclusion, Van Bramer and Crowley are behaving like 'Excellent Sheep,' (read the book--it was tailor made for these two Queens sycophants), and not raising any objections to the publicly unauthorized plans of Melinda and her Borough Hall entourage, and the secrecy that has altogether removed Civic Virtue Task Force members like me, former Community Board 9 District Manager, Mary Ann Carey, CB9 Chair Ralph Gonzalez and documentary filmmaker Robert LoScalzo, from any accountability and transparency by eliminating our voices from the Department of Citywide Administrative Services (despite pending FOIL requests that were due for reply in mid December--and and still waiting), and a face-to-face meeting with Madam Katz's Director of Community Boards, Barry Grodenchik, and Community Art Director, Nayelli Valencia Torrent (both of whom have not returned any and all of our collective telephone calls, e-mails and requests for more meetings that allow democracy to prevail, since Tuesday, April 8, 2014, when a meeting was held with all of the above presiding, at Borough Hall. Finally, there is a crisis in honest, ethical leadership (that leads by example), and although Queens is thoroughly entrenched in this dupe of a scam that dictates Neo-fascism throughout the City Council (and right up to the intensely incompetent council speaker and mayor himself), it is truly a crisis that has been involuntarily inflicted upon mankind nationwide--and globally. Therefore, there is no hope for REAL change for actual accountability, transparency, character, integrity, principle and leadership skills to prevail. Sadly, it's the same circus--different clowns of corruption, dishonesty and disloyalty. At least that is how it feels to me regarding the monstrously false, fake and failed leadership throughout Queens--least of all my poling district! Happy New Year? Not for Queens in 2015!

is this sled the elected offical version of a clown car.

and where is that errant f train drill when you need it.

Do not lose hope. When one door closes, another opens.

Now that the pols have done everything to disrespect the people they are to serve, we can make them the object of ridicule and jokes they deserve, and especially go after all the toadies that support them.

It was a great year. I got to watch John Liu lose yet another election.

I hope he runs for something every year so I can watch him lose every year.

A gift that keeps on giving from the son-of-a-convicted-bank-thief.

If Van Bramer is such a hot shot art maven, I'd think he'd be in the forefront of bringing the artistic masterpiece Civic Virtue back to Queens Blvd.

It figures....Jimmy Van Backdoor has everyone on top of him. I told you he's are bottom who loves playing Johnny on the pony with the gang.

George, Van Bramer is still too traumatized over the loss of the statue with the gratuitously erect phallus in "Bear Eats Man" from Socrates Sculpture Park.

Why is Mr. Crowley from Arlington, Virginia still representing the poor slobs of Queens. He obviously moved there because it's a better quality of life for him and his family. What about the people he supposedly represents in Queens? What about our quality of life? It would be better if he resigned and we had someone who is familiar with and actually resides here. His family Christmas Card shows his arrogance to his constituents. It's like he's giving us the finger for Christmas. Isn't there some residency rule regarding his job? Why isn't there a residency law for his position?

The Crowley's must love Virginia's strict traffic laws. Once these the Queens machine takes back the City government, I expect Crowley and friends to build on DeBlasio's insane traffic laws to make NYC more progressive. Perhaps going 20 mph over the speed limit will be reckless driving in NYC soon, like in Virgina?

How many times must it be said, FUCK VIRGINNY JOE CROWLEY!

Let's return his congressional seat to a REAL Queens resident!

Like thunder after lightning, you attack a hack the hack attacks....

Looks like everybody is on Jimmy's back. Feels so good...eh?