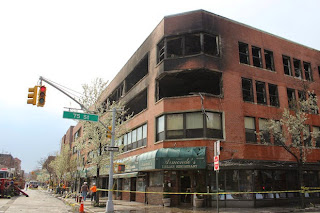 Residents who have ideas for the future of the damaged Bruson Building can share them at an upcoming town hall sponsored by local pols, officials said.

The building — which was heavily damaged in a multi-alarm fire last April — is currently undergoing renovations and is looking to fill multiple empty storefronts and offices by next year, according to a member of the trust that owns it.

The meeting will be held Jan. 22, 2015, at 7 p.m. at the Jewish Center of Jackson Heights, and is co-sponsored by by Sen. Jose Peralta, Rep. Joe Crowley, Assemblyman Michael DenDekker and Councilman Danny Dromm.

Craig Bruno, who is part of the trust that owns the Bruson Building, told DNAinfo New York earlier this month that he'd like to see "major" chains, including Popeye's and Burger King, fill up the stores on 37th Avenue.

Ah, they want your crappy fast food ideas.
Posted by Queens Crapper at 12:10 AM

In sure the landlord had all the ideas he wanted for the property before the fire. An those plans most likely don't include anything at all that would be beneficial to the actual neighborhood.

I don't know about you, but I'm praying for more faceless corporate retail!

What an ugly piece of crap anyway. Raze it and be done with it. Perhaps a nicer piece of architecture will replace it. After all we are in the JH historic district.

How about a gay rights center Mr. Dromm?

Raze the building and build an huge Welfare Office, so all the illegals don't have to travel so far to obtain their benefits.

Just show up at this meeting…give your voice instead of just complaining.

the landlord should put whatever the hell he wants there, it's his property. goddamn leftists will never stop pushing their collectivist agenda. this is no longer the country it was founded to be.

If the landlord rebuilds according to the zoning and pays his taxes, what business does Peralta, Crowley, DenDekker, and Dromm have to interfere?

Don't trust "the trust" that owns it! It's nice for all the "concerned" pol's to show up for a photo op...oops, excuse me...."public input session". This will amount to a bull session. The public does not hold the deed to the property. The owner will politely listen, if he attends, then will do what's best for his bottom line. Dromm, and company, will use the opportunity to further their careers. The privileged of Jackson Height....those who abide within the historic district....will have to deal with reality. Flushing, Maspeth, etc. has been dealing with that for many years. Welcome to the club!

The only restrictions the landlord has to follow is that the building complies with the architectural restrictions of being within the historic district. Sorry, Theresa, you do not own the building. The lives of people sequestered within the safe confines of the landmark nabe will have to accept that they have no real power, just a comfortable place to lay their heads on dreamy silk pillows each night. Come to Jamaica. Now that is some place to live, you wimps!

Hmmmmmm.....demolition (or gutting) by fire saves the "trust" a lot of money, eh? So, ahem, Jackson Heights is not immune from life's dealings.