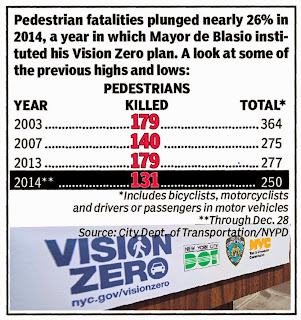 The number of pedestrians killed in traffic accidents this year — 131 as of Sunday — is the lowest on record, de Blasio administration officials told the Daily News on Monday.

With just a day left before the ball drops in Times Square, the city almost certainly will end 2014 with the fewest pedestrian deaths since 1910, when officials began to keep reliable statistics, a mayoral spokesman said. Back then, streetcars and horse-drawn wagons also were on the road.

The previous all-time low was in 2007, when there were 142 pedestrian fatalities, officials said.

Of course, as Joe Moretti points out, there still is pretty lax truck enforcement. They could have had the number even lower if they focused on that as well.
Posted by Queens Crapper at 12:08 AM

How about making it safer for drivers of cars and riders of motorcycles? How about somethinfg simple like fixing street/ highway lighting and repainting worn out pavement markings. I'd likecto see more Highway Patrol cops between 10 pm and 3am.

A good idea would be cracking down on those who administer road tests. I don't see how they can pass some of the new drivers. Drivers are constantly ignoring stop signs, traffic lights, pedestrian crosswalks, driving on the wrong sides of streets, opening car doors without checking for traffic, etc., etc.

I am convinced that driving schools are paying off the driving inspectors. There is no way many of these new drivers are qualified to be behind the wheel.

So all this effort for "zero vision", and all we got for it was as 25% reduction?

Anon #3, you assume that alot of the people on the road have licenses. There are lots of unlicensed drivers out there. It would be nice if there was a crackdown on that.


Jogging and walking around North East Flushing is a hassle, I have been hit by cars while crossing an intersection where the driver is supposed to stop ending up on the hood of the car and luckily without harm, people don't stop and when backing up from their driveways they don't look even near schools.
In midtown Manhattan is even worse with the bicycle riders, they don't stop at red lights, ride against traffic and since you usually don't look the other way while crossing the street they run you over while ringing the little gay bell that is supposed to let you know the asshole is going to hit you from behind because he or she is riding the opposite way.

WNYC has shown that the official number for traffic fatalities are worthless.

Anon 4 don't see this as a 25% reduction. It was a bad winter. Wasn't 2011 too? That means fewer people out and about - fewer deaths. Next mild winter deaths will spike up again.

"...I have been hit by cars while crossing an intersection where the driver is supposed to stop..."

You got guts?
If so do what I used to do. If the car pulls across the crosswalk blocking your right-of-way, hop up and walk across the hood of the offending vehicle.
However be prepared to fight and make sure you are walking from the DRIVERS side. Nothing worse than doing it from the passenger side and have to kick the driver in the mug when he/she gets out to attack you.
It's invigorating and the driver will think twice before blocking a crosswalk again.

I agree with cracking down on those that administer the driving tests. My son took his driving test in Flushing several months ago. We were one of the first appointments and as the 3 examiners approached the Asian driving instructors exited their cars without their students and swarmed the examiners, wrapping them in hugs and patting their backs. It was obvious money was being exchanged.

The posted stats are bullshit in that you can't determine a real trend on just 4 data points.

Nothing can be said about this zero vision program for several more years yet, then compared to several years before that and weighted according to changes in number of vehicles and pedestrians.

Then only can we discuss trends.

Just looking at this data, I'd wager a good bet that the 2014 numbers are within one standard deviation, i.e. a fluke.

In any event, no amount of laws or politician's hand waving programs will have any real effect as it ignores the real problem: Motorists, pedestrians and bicyclists ignore the rules of the road and have no concept of common courtesy towards each other.

So what's the point of adding more laws and rules if nobody is following the existing ones already?

The belief that this zero vision program can reduce accidents is highly dubious. That it can really eliminate all traffic fatalities is a childish delusion since as human beings, we are not perfect and prone to make mistakes.

That's why they're called "accidents".