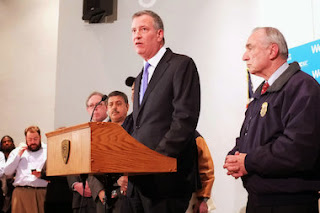 While Mayor Bill de Blasio was personally coaxing the city’s police union presidents to meet with him, his top aides were on the phones with lawmakers urging them to blast PBA President Patrick Lynch and other officers for turning their backs on the mayor following the assassinations of two of New York’s Finest, DNAinfo New York has learned.

As late as Monday afternoon — the same time de Blasio was speaking with police union leaders to set up Tuesday's détente to possibly mend their fractured relationship — the mayor’s government affairs honchos were privately cold-calling the city’s Democratic delegation of city and state elected officials, asking them to publicly criticize Lynch and those officers who dissed the mayor.

“City Hall wanted me to blast the Patrolmen’s Benevolent Association for turning their backs on him,” a Big Apple legislator told “On The Inside.” “They called up Monday, said they were calling all of us, and that it was our obligation to stand up defending the mayor."

There was an expectation from City Hall that "because they were calling that we should do whatever they ask," the lawmaker said.

And it didn't stop there.
Posted by Queens Crapper at 7:47 AM

If the Mayor can't take the heat, he should get out of the kitchen.

The Wiesel is looking for nonexisting support. I doubt he will get from labor unions or any politician who is smart enough to see the handwriting on the wall.

De strunzo wishes he could be as good as Bloomberg. And that's saying a lot about him.

And to accuse others of playing politics? What a scumbag.

Office Liu Is not even buried,and Mayor big slow is trying to do damage control and damage his rivals at the same time

I take back the other comments I posted about the back turning.This city hall stunt is an inexcusable hideous and cowardly display of hubris.obviously the blaz is taking it personal,playing dirty pool by browbeating top officials to turn on lynch.

the thing with our mayor and the most powerful and influential members of the Democrat Party is that because of the awful immoral policies,decisions,controlled legislation and tactics of the G.O.P.,W Bush/Cheney and mayor fun size bloomberg of the past horrible 14 years is that they can get away with it too since the rules are already made for them.and by giving the middle class,blacks and minorities,the poor and poorer a little bit of crumbs at a time to keep us mollified,so they can remain in their official shelters.

a commenter here aptly quoted malcolm x about the killings of ramos and liu.Well the blaz has just made lynch bigger by giving him more credibility.this makes him the Sharpton of cops now.Compound this with D.A. Donavan a top contender for congress and our little vibrant and diverse melting pot is going to blow up like claymore bomb.

by the way,anyone wonder why bratton is still on blaz's side?
what does he stand to gain trying to run the Nypd and the horrendous climate that's facing nyc in 2015?

When does Patrick Lynch even have the time to visit Liz Crowley?

The Blaz tries to make peace while stabing the cops in the back,how low is that, true commie mentality, make peace with your enamy then kill them.
THE BLAZ HAS TOO GO.👮

Only Mikey Mildew, president of the totally corrupt UFT, fell for DiBl-ASS-io's line of garbage, throwing his teachers totally under the bus for a miserable laughable "raise" which doesn't even approach the cost of living increase and which doesn't distribute money earned in 2009-2011 until 2020 (!). The other unions apparently had better leadership (with Mildew at the helm, claiming better leadership would not be difficult at all).

And then DiBl-ASS-io rummaged through a mothball-filled closet to resurrect Carmen Farina from the dead to be his rubber-stamp Chancellor. She kept schools open in one of the worst blizzards in recent memory, forcing teachers and students to travel in conditions the city administration warned people against traveling in! And for what? Classes of 34 students yielded 2-4 students attending that day per class. Most schools just rounded up the kids who came and showed movies in the auditorium. But it was a "beautiful day" according to Ms. Dementia. My definition of a "beautiful day" would be the day they throw this DiBl-ASS-io Commie out of office and throw this dogmatic hag after him.

Add Bratton to this dung heap. He says he thinks the cops shouldn't have turned their backs? Where was he speaking out against sitting on a panel with Sharpton or throwing stop and frisk under the bus? He says he is a cop's cop? He is a pandering politician that will say anything to keep his job. See how that goes as crime rises.

This goes back to Occupy Wall Street and Bloomberg. These protesters saw they could thumb their nose at law and order under the umbrella of social injustice and the cops would do nothing. Now that is has been ramped up and officers murdered it can't be walked back. Good job Nanny Bloomberg! Good Job Comrade DeBlasio! Welcome back the wild, wild west.

I think DeBlasio is starting to realize that he is political poison and his future aspirations are non-existent. He can't apologize to the NYPD because he can't disappoint his best bud, Reverend Al or his wife. He thinks he's above the law and doesn't owe anyone any explanations or apologies. So much for transparency. I feel for the NYPD. They have no support from City Hall or the City Council, however, they DO have the support of the middle class.

for all his flaws, and there were quite a few, bloomberg was an infinitely better mayor. de blasio is a left-wing enemy of the united states, just like the president.

Remember he has the full backing of city council, and it seems that they are going along with his program hook line and sinker.

All the politicians over the past 20 years have become increasingly arrogant with a chip on their shoulder and a cocky entitlment 'what are your going to do for me?' attitude.

They have complete control over our lives - some scumbag makes a donation to them and you have absolutely recourse no matter what damage it might do to you and your family.

Only in Russia is the government worse - Europe is miles ahead of us in accountability and professionalism of their political class.

I'm still thinking DeBlasio is better than Quinn. Let's review that in February.

Bloomberg...? Really? All I see is a left wing cop-hater, beholding to Al Sharpton, his cronnies, and the black community. Amazing what others see.

I doubt if Bloomberg was aMarxist/progressive.