Meng gets bill passed that might fund historic sites 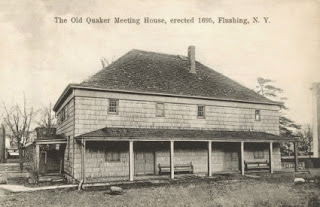 The Flushing Remonstrance Study Act would require the secretary of the Interior, who oversees federal parkland, to consider the possibility of giving Flushing sites, such as the John Bowne House and the Old Quaker Meetinghouse, support from the National Park Service.

The bill passed the House 20th century in September. If President Barack Obama signs the bill, the National Park Service will be able to look at whether the sites meet the requirements for national significance, suitability and feasibility.

While this sounds like something positive on its face, the reality is that the National Parks budget is frequently subject to budget cuts, and more often it's the local governments that have to step up with funding to save national parks than the other way around.
Posted by Queens Crapper at 5:24 AM

too bad. the Chinese developers have their eyes on those properties, they are already taking over the Quaker cemetery inch by inch.

Visited the Bowne house recently during the QHS sponsored weekend event.Was sadly surprised to see its condition.Seems like one of those "Only in Queens" situations.

A well placed match and Meng's contributors will be bidding to build a high rise Fedders tower on the site.

They couldn't care less about the history of this community.

Visited the Bowne house recently during the QHS sponsored weekend event.Was sadly surprised to see its condition.Seems like one of those "Only in Queens" situations.

Ask the Kupferbergs. They were the party that overturned the elections and started the lawsuit in the early 90s. From there the house went down hill.

So much history lost and neglected in Queens. There is lots more to save but the rate of demolition or defacing the original structure due to poor taste or no regard or knowledge of the style is at a unstoppable rate in Queens and the city as a whole. I have nothing left but to give up any hope.

That don't let her daddy off the hook for being a common crook. Dad was ready to carry an eighty thousand dollar cash bribe in a fruit basket to buy a judge with . The FBI was wise to the plot and now Jimmy is a criminal former assemblyman. Gee wasn't Brian Mc Laughlin also in the state assembly? How many other pol-crooks have not year been caught?

Wise up, the Chinese and Koreans do not care for American history or your landmarks. Quakers you are the ones who did this to yourself with your anti white and anti American agenda.

QHS did NOT sponsor the Holiday House Tour.