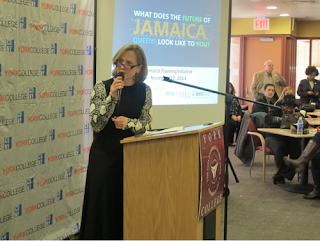 Borough President Katz will host a meeting of the Queens Borough Board on Monday, Dec. 1, at 5:30 p.m. at Queens Borough Hall to discuss large-scale real estate development of Queens.

Queens finds itself in the cross-hairs of real estate developers and government officials for major development, none of which fully addresses the need for the creation of large-scale stock of affordable housing. Mayor Bill de Blasio (D-New York City) announced that the city would target Flushing, Queens, for zone-busting development, and the city's Economic Development Corporation has expressed interest in exploiting Jamaica, Queens, for rapid development, as well. Flushing is encompassed in Queens Community Boards 7, 8, and 11, whilst Jamaica is encompassed in Queens Community Boards 8 and 12. Already, a group has formed in Jamaica "to build relationships with private companies" to facilitate real estate investments in Jamaica.

Residents in Queens, including long-term immigrant residents, have opposed the conversions of hotel facilities into permanent homeless shelters, like the former Pan American Hotel, as seen on Oct. 3, 2014. Queens is being targeted for rapid upscale real estate development at the same time when the borough is also paradoxically being chosen as the setting for a greater share of the city's homeless shelters and for more juvenile inmate detention centers.

Separately, the city is looking at Queens for the creation of permanent homeless shelters, which is causing turmoil in bedroom communities opposed to inconveniences associated with shelters, even pitting long-term immigrant residents against newly-arrived immigrants. The city is also evaluating the need to create a permanent detention center in Queens for juvenile inmates to comply with new state regulations at the same time when federal prosecutors, in an unrelated action, have recommended to the de Blasio administration the relocation of teenage inmates away from Rikers Island, a recommendation that New York City Councilmember Elizabeth Crowley (D-Queens) said could be accomplished by renovating the now-vacant Queens House of Detention.
Posted by Queens Crapper at 12:30 AM

The powers to be want to dump shit in our communities, they want to over-develop or gentrify, yet they DO NOT WANT TO ADDRESS QUALITY OF LIFE ISSUES. No wonder our communities and this City is going to shit. This is what the assholes get paid big bucks to do, fuck everything up.

On one hand we have the mega rich, who don’t give a shit and on the other hand, the bottom feeders who just take, take, take and destroy neighborhoods. The middle class gets fucked in the ass and has to fend for itself. Before long the city will be the mega rich and the mega poor, a deadly combination. Because by that time, the middle class we be gone, moving out of this hell hole city.

The future of NYC does not look good from this type of irresponsible development and there is only so far you can go before it implodes.

Melinda, DO SOMETHING ABOUT THE PARKING LOT!

renovating the now-vacant Queens House of Detention....If Dizzy Lizzy is for it, this must be a bad idea.

Community Board 8 (the 107 Pct area) is mentioned twice in this article. I would like to know where they plan on building the affordable housing. Have the communities affected been consulted? Are we getting more Police, Fire, Sanitation, etc along with the influx of people?

A luxury development in the noise pollution capital of the country?

The real-estate tycoons who want to invest heavily in Flushing might want actually visit the area before laying down their hard-stolen cash.

No "upscale" patron, in any capacity, would subject themselves to the nightmare that the FAA has introduced to Flushing in past 2 years.

The TNNIS climb, which puts 500 low altitude departures over Flushing for days on end, doesn't lend itself to the idea of "luxury". No luxury development would succeed in Flushing, including the three mega-developments already on the way.

Lets reclaim our airspace. Then we can be properly gentrified.

What is there to discuss. Developers get carte Blanche in this cheap crook-pol borough. Give the sheeple the illusion that what they have to say about the nabes they live in being supersized by over development. Community boards are the same ..giving the dumb electorate the false feeling that they participate in government. Abolish them all. They are a drain on taxpayers' pocketbooks.