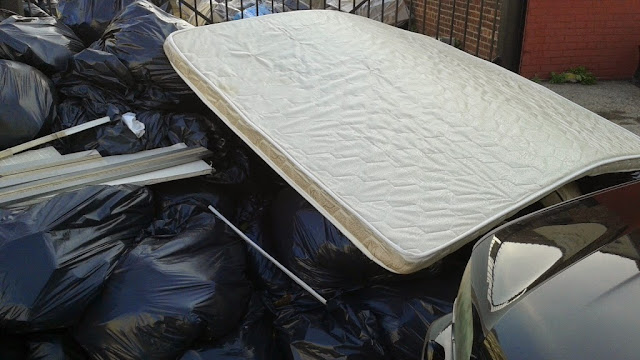 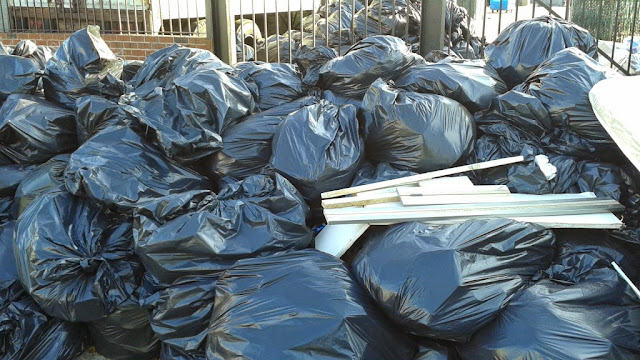 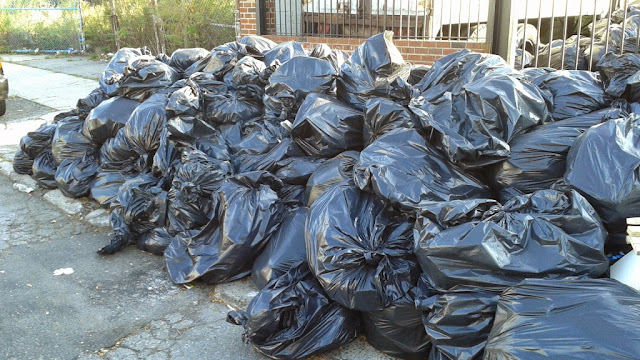 Passed the above Panam location at 8 am, garbage bags still all over the curb with the mattress on top, when I returned at 8.45 am, the mattress was removed but all the black bags were still sitting there, there was a guy standing near those garbage bags, he looked like he was waiting for the garbage truck, also there were a couple of police cars on Queens Blvd near Hillyer with a couple of policemen, not sure what was going on.

Aren't mattresses supposed to be wrapped in plastic for disposal?

I can see why this shelter should become permanent. It's being run so well.
Posted by Queens Crapper at 12:50 AM

This looks like the outside of most apartment buildings and commercial districts in the city on trash day (or the night before). It should be illegal to pile trash on sidewalks like this. If there is nowhere else for trash to go then offer the buildings the opportunity to rent some street space (parking spots) far from crosswalks to place a dumpster.

This looks exactly how it looks outside the cement "barracks projects" in Ukraine, China and Rio !!
Rats, bedbugs and 3rd wold airborne disease like TB come next !! 25 years ago nobody would believe that photo was taken anyplace in America !

It hasn't looked this way since trash night. It's been sitting there for 11 days.

But you have to understand that Honest Joe Crowley needs to pay all those drones manning his phone banks come election season. This place is useful for the Honest Graft jobs it creates for the party faithful.

Totally unacceptable. NYC needs to stop calling itself the best city in the world. Far from it and this shit proves it.

where is Danny Dromm regarding this situation -- I would think a simple phone from his office to call to the Dept. of Sanitation would get this resolved quickly since he knew all along this was becoming a homeless shelter and all of the repercussions -- this should be on the news channels regarding these problems --

Sanitation is too busy writing bogus violations against Woodhaven businesses in the wee hours of the night. A "I think I saw an Arabic man place something in this pile of trash" would be far more effective in getting it removed. See something, say something indeed.

Are they recycling? organics? Or is that "too much of a burden" to put on these downtrodden folks?

Why dont you ask the source of our problems, the Democratic Machine?

Congressman Joe Crowley
Cordially Invites You To His

Dont bring your bikes as Valet parking is available.

NYC is now only Manhattan, Queens is just cheap labor "dump" barracks to get more money from the federal government.
The census people hired to get those numbers will will be banging on doors again as soon as Obama gives the illegals executive amnesty, specials protection's and voting rights.
(With all these shit democrat politicians blessing of course)
These millions of people who broke dozens of laws to come here come out the woodwork in hordes demanding more free stuff and acting up knowing they have "protection" --and they WILL be coming through your windows, looting, marching, rioting and burning buildings when they cant get it do to a then bankrupt city and state.
I wonder what the gun control commies with think when the cops are home protecting there own family's and interests leaving law abiding citizens to fight off angry mobs of brats with sticks and rocks

This is disgusting! Obviously a building that houses so many people is going to produce this amount of trash. So why doesn't the city arrange for more frequent trash pick-ups? I often feel like Queens is the neglected crap pile of the city. Yes, fancy apartment buildings in Manhattan produce trash piles this size, but they are only on the sidewalk for about 12 hours tops. Why don't our politicians care about Queens residents? Uh, we pay city taxes too. Yet trash can pile up like this. And we have hardly any public garbage cans on our sidewalks, even in super-busy areas like Roosevelt/74th and near the mall. I am just disgusted. I thought the city wanted us to accept the Pan Am shelter, realize it wouldn't affect our quality of life, blah blah blah... well, seeing (and smelling) this 11-day-old pile sure makes that difficult!

What the hell is "Elmhurst United?" Another anonymous watchdog group?

A coalition of groups fighting the shelter.

Who gives a shit who they are, they are dealing in photos and facts.

Just another example of mismanagement by Samaritan Village. Too bad for the Elmhurst residents that yet another shelter has been dumped on them.

Joe Moretti, you just blindly trust any new community group if they proceed with photos and "facts?" Seems like you should be more meticulous about who you throw your trust to, unless you're one of the ones with a password protected login.

Do you trust me?

I have thought long and hard as to what I think about Queens Crap as a regular reader. I am still undecided.

Why doesn't this Asian group form a branch in Flushing? This garbage is nothing compare with the way the Asians have trashed downtown Flushing!

It's interesting that there's an Asian group speaking out against helping single moms with children when so many of them pull out a benefits card to purchase groceries while driving a Mercedes!

What a bunch of bullshit hypocrites!

This isn't an Asian group, and the person who took the photos is not Asian.