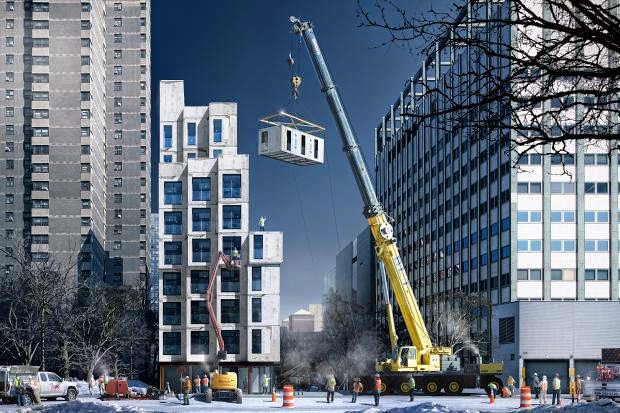 Through a friend of a friend, David Abramovich found a sunny room in a five-bedroom apartment in an industrial building near the Barclays Center when he relocated here from San Francisco this summer for his job at crowdfunding start-up Indiegogo.

The 33-year-old tech worker pays $895 a month. That's nearly 60 percent less than the average price for a Brooklyn studio, according to real estate firm MNS.

Altogether the Prospect Heights home has six roommates, a steady stream of guests crashing on the couch and the occasional small concert staged in the living room of the fourth floor walk-up that still has manufacturing companies on lower floors.

"A lot of people don't want to have five roommates, especially in their late 20s and early 30s, and once in a while, it's like, 'Yo, there are a lot of dishes in the sink,'" Abramovich said. "But it turns out I like to live with a lot of people. And price is important to me."

Some developers are now trying to create their own versions of these types of housing set-ups — albeit up-to-code (which Abramovich's apartment is not) — with sleeker amenities and even social directors like on cruise ships.

Recognizing the thriving underground housing market for single young professionals, whether out of college for a year or even a decade, who subdivide apartments — sometimes illegally — companies are eyeing a model based on "micro-suites," where up to three tenants, each with their own small room, share a kitchen and bathroom.

Each tenant will be on the lease — something that is rare in the underground housing market. Having only one or two tenants on a lease can be problematic if there are problems with the apartment but is a boon for those who don't have credit scores needed to rent their own apartments.

And here's an article from Crains about modular construction.
Posted by Queens Crapper at 12:16 AM

this reminds me. Has anyone seen the Lego Store on West 23rd Street?

And the pity of it is is that NYC isn't great anymore! It's glory days are long gone.

There's nowhere to hear music, the artists are all gone, and many small, interesting stores closed up shop a long time ago - such as the Biography Bookstore - it's now a Marc Jacobs useless enterprise.

So you get a tiny room and wait in line for the bathroom - I imagine what they'll end up with will be 3 families of at least 4 in each room!

I hope they use hard-core extra-heavy-duty pipes for those toilets!

The nee housing will be smaller, but probably not any cheaper.

it's definitely glorified SROs,but acceptable because these are yuppies and hipsters,and not immigrants and welfare receipients

this is nuts.stacking these can't be structurally sound.

I think I found the inspiration for this nonsense,with one of his early developments

Is this supposed to be a picture dictionary entry for the word, 'shitbox'?

This will be Queens in the coming decades - three families per pod and they STILL will be living better than where they came from.

Step by step we are reducing our people to third world ghetto conditions by politicians that are "proud to surround themselves with amazing people" as they run unopposed and play games with public money starving the worthy and shoveling it on incompetent ass-kissers.