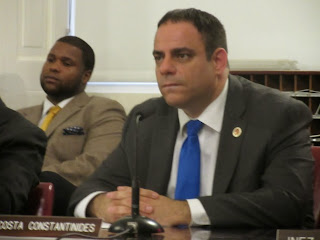 The massive Astoria Cove project is a major stride closer to launching today — as is long-proposed ferry boat service for the Queens waterfront area.

After months of negotiating and hours of backroom deliberation, the City Council’s powerful Land Use Committee today stamped its approval on the controversial 1,700-unit luxury development–permitted that it set aside 468 units for low- and middle-income tenants, hire unionized construction workers and building staff, include a co-operative supermarket, pay for improvements to local parks and a senior center and commit $5 million to the construction of a ferry dock.

“I am happy to say we have an agreement here at Astoria Cove that truly integrates this development into our community,” said Councilman Costa Constantinides, who represents the area where the development will take place, but does not sit on the Land Use Committee. “This deal is historic and we’ve changed the way development happens.”

The controversial luxury Queens waterfront project–which also includes retail and a new school–encountered considerable resistance over developer Alma Realty’s initial reluctance to hire union labor and to set aside more than a quarter of the new residences for low- and middle-income tenants. Mr. Constantinides–joined by Council Speaker Melissa Mark-Viverito and Queens Borough President Melinda Katz–had led the opposition and the arm-twisting, and the Council almost always defers on land use matters to the wishes of the local representative.

Mayor Bill de Blasio, however, was a supporter of the project–seeing it as a test case for his new mandatory inclusionary zoning policy, which requires developers to insert affordable units into new developments as a precondition for construction. Previously, the city had relied on subsidies and tax abatements to entice companies into adding below-market rate units.

Committee Chairman David Greenfield noted that the 27 percent of units set aside for below-market rents is the largest affordable housing percentage agreement in city history.

However, Alma's history with regard to affordable housing is a joke.
Posted by Queens Crapper at 12:22 AM

How much money has he gotten from the developer? Van Bramer got $10,500 from the Wolkoff family to overdevelop the former 5 Pointz site. Behind every successful politician is a host of developers who have bought and paid for their schnook! Just follow the money trail.