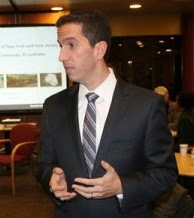 In a continuing effort to effectively monitor noise caused by planes flying in and out of JFK Airport, the Port Authority of New York and New Jersey has agreed to install additional sound monitors in Bayswater and Broad Channel, Queens. Assemblyman Phil Goldfeder (D-Ozone Park) was aggressive in his pursuit of these monitors and wrote a letter to the FAA and Port Authority in September.

Beyond the additional monitors, the Port Authority offers a tracking system on its website, so that residents can monitor the paths of aircraft and see for themselves the specific decibel levels being recorded. It has also increased staffing to handle noise complaints.
Posted by Queens Crapper at 12:02 AM

How do we get them for idling semis making deliveries to our crappy grocery stores in Queens? And for leaf blowers?

The noise in unbearable!

shhhh!!! it is like the law city council passes then ignores, it makes good press and dupes the gullible Queens voter.

A speaker at the RALLY against airplane noise held in Cunningham Park said who needs a noise monitor...just listen how loud the noise is! I agree...once again at 6:15AM this Sunday morning I was blasted out of bed. The intolerable "noise" continues more than four incessant hours later. I wrote a letter to Gina McCarthy, Administrator of the US Environmental Protection Agency (EPA). The response I received was an eye-opener. There is only one interested stakeholder benefiting from NextGen technology - the airline industry. Federal, State and local ekected officials need to step up and enact better legislation that protects the people living near airports and under the current NextGen flight patterns. The current laws are circular and allow for NOBODY to take responsibility. I quote from the EPA response to my letter: "..the FAA Modernization and Reform Act of 2012, with it's focus on accelerating Next Gen technologies by coordinating and expediting review, only requires the FAA Administrator consider the per flight impacts of the technology before issuing a categorical excel
Union from environmental review under the NationalbEnvironmental Polcy Act (NEPA)......further, "Most types of nose are the responsibility of STATE AND LOCAL GOVERNMENT, and are controlled by the enforcement of local ordinances. In 1981, it was concluded that NOISE ISSUES WERE BEST HANDLED AT THE STATE AND LOCAL LEVELS. As a result, EPA's Office of Noise Abatement and control was closed and primary responsibility of addressing noise issues was TRANSFERRED to STATE and LOCAL governments."

So, while everyone gets to blame everyone else, homeowners living under NextGen flight patterns who were blasted out of their beds about two years ago with no warning, no hearings, and no say in the matter, are now living under intolerable noise and who knows what is in the air we breathe as planes fly every thirty seconds for hours on end above our homes and apartments.

Noise monitors will gather the evidence that will ultimately be required to make NEW AND BETTER LAWS, but we already know IT'S TOO LOUD!

Lastly, we need legislators who will mandate the re-engining of planes with LEAP, NEO and PURE POWER jet engines NOW. Ultimately, this terrible noise problem will be solved by technology and progressive legislation enabling government and private industry to work together to finance this transition.

Short term solution - PLANES NEED TO FLY MUCH HIGHER ABOVE OUR HOMES NOW!

"Assemblyman Phil Goldfeder (D-Ozone Park) was aggressive in his pursuit of these monitors...."
Why is he taking credits for the monitors? it is groups such as QueensQuietSkies, and the Roundtable members, who have insisted on the monitors. The only pol who has consistently been involved in this is Avella. Unlike Goldfeder, Avella has attended all the roundtable meetings.

Avella has been there every step of the way. But when we needed Meng and Isreal and Vallone to actually SHOW UP at the roundtable meeting the other night...they didn't.

They all sent staffers who promptly played with their smartphones for two hours.

The short term solution is to modify approach and landing protocols. Landing gear, slats, and flaps configurations affect aircraft drag. The more drag you have, the more thrust you need to stay at a certain speed.

So what does this mean? Keep the landing gear up for as long as possible. Maintain airspeed by trading altitude for speed. Fully deploy flaps slats and landing gear below 500 ft above ground altitude. This way, the engine is at idle between 3000 ft - 500 ft altitude. As the crew deploy slats and flaps, the stall speed decreases, with drag increasing. This allows the engine to stay idle even longer. As the crew uses auto throttle, they need to adjust settings from 180-220 knots to 170 knots, then 150 knots. If the aircraft has slower stall speed with flaps and slats at max settings, then 130 knots and 110 knots are further auto throttle settings. Speed brakes could be used to cut speed from 220 KIAS down to 170 KIAS and below.