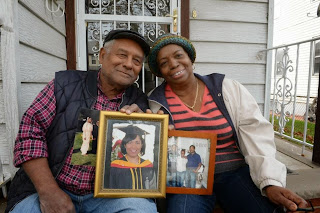 The city's black middle-class population is receding, according to a study.

The report, prepared by the nonprofit Citizens Housing and Planning Council, showed that the black middle class declined 18%, as the black population dropped across the city by 5%.

Once solidly middle-class strongholds in Hollis and Jamaica, Queens; East Flatbush, Brooklyn; and Woodlawn, the Bronx, had significantly fewer middle- and upper-income black families in 2010 than they did in 2000, and significantly more low-income families, the study reported.

In Hollis, longtime residents said they had felt the change.

Smith said his neighbors have largely have packed up and left town in the past 10 years, pushed out by rising property tax rates.

Most have headed back to the South, Smith said, where many like himself hail from originally.

“We’ve had brand-new neighbors for the last 10 years,” he said.

Other residents said that after the foreclosure crisis, real estate agents and speculators descended on the community, buying up houses and splitting single-family homes into two or three units.

We’ve had brand-new neighbors for the last 10 years.

“Every day, you see people stopping you, or putting things in your mailbox, wanting to buy your house,” said Winston Byndloss, 73, who moved up the block from Smith in 1978.

“How they cut them down nobody knows. I would love to see what size the bedrooms are.”
Posted by Queens Crapper at 12:13 AM

They are retiring and moving south ,just like lots of other ny'rs.

This is the NYC people voted for and it will only get worse for the middle class.

I've been noticing this for the last 20 years. They all left south and you can't blame them. The southern states haven't been run down with third worlders (in most states) and liberals. New York City has gone to crap and continues to go to even further down the toilet. There are no regular people left in nyc. I don't even get to hear anyone who sounds like me in the streets anymore. Everyone here either doesn't speak English or has some annoying stupid out of state accent. I wish they'd all go back to whatever fuckin hole they came from. The new York accent is dead and all of new York City is dead to me anymore.

Southeast Queens has the highest presence of illegal Cash For Cars and Cash for Homes posters.

Carribean blacks may not identify as/with African American so these numbers may be skewed and a misrepresentation.

Too bad the lower classes aren't leaving. They are the problem. High crime, filth, etc. abounds in those areas. Not to worry. As we develop more and more babes these are the only ones left to develop for incoming hipsters. Urban renewal...Black removal.

The southern states haven't been run down with third worlders (in most states) and liberals.
---
Hey hack, you better ask Joe Crowley to let you out more. The south is swamped with the 3rd world - should make a real toxic brew once they start to breed with the Honey Boo-Boos. Our own home grown version of the mestizo.

Too many section 8 renters ruining the neighborhoods. These places are destroyed by people who don't pick up garbage on the properties, loud music, drugs and such by low lifes. No ONE wants to live next to that, especially when you are retired and just want to relax quietly on your home you worked hard for to buy.

not just blacks, ALL middle class.

And #3, don't go praising the south. Its a bigger shitshow down there than you know. Higher poverty, higher crime, more racism, plenty of 3rd world trash, and with a worse economy, worse job market, and the lowest education standards in the western world.

Oh, but the taxes are lower, so it must be paradise!

the only reason they are ruining our communities is the politicians want them there.

its a win win.

gets rid of the quality of life assholes and brings in the bed rock needy types that the party lives for.

In Flushing, Queens I see more blacks than I have ever seen before.

The middle class can vote with its feet and they are leaving Queens because (a) the quality of life here is in decline and (b) employment opportunities for them outside of New York City are better.

The people who are stuck here are government employees and public assistance clients. For them, Queens is getting more attractive each year.

Anonymous said...Too many section 8 renters ruining the neighborhoods. These places are destroyed by people who don't pick up garbage on the properties, loud music, drugs and such by low lifes.
________________________

BINGO. You hit the nail on the head, plus the fact that Jamaica has the worst elected officials of anywhere in Queens, incompetent, corrupt and totally useless.

Anonymous 9.....I lived in Maryland and would go back in a heartbeat if my family didn't need me. I stayed in Maryland for three years and dreaded coming back to nyc the way it is now, so I know what I am talking about. I also know people who have moved to Atlanta and parts of North Carolina and Florida and they are all loving it down there. Nyc has become an even bigger shithole than any of those places. Also, nyc schools really are not much better. Look at all of the kids that are going to school in nyc and they are coming out dumber than they went in.

The Jeffersons, after moving on up, are moving on out. :-)

The middle class is becoming like the meat in a s ex sandwich...getting it from both ends.