Jamaica garage may be developed 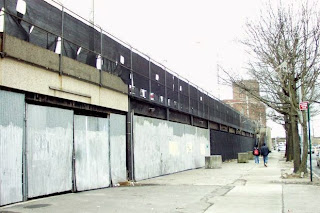 The city is planning to transform a run-down Jamaica garage into a development that would include affordable housing and retail, as part of its goal to revitalize the long-overlooked neighborhood, officials said.

The city's Economic Development Corporation will soon release a request for proposals in an effort to develop the 45,000-square-foot site on 168th Street, between Jamaica and Archer avenues, Kyle Kimball, president of the agency, announced at a recent community event in Jamaica.

The agency tried to revitalize the site seven years ago, but the developers were hampered by the recession, the city said.

The city-owned site, across the street from the Home Depot, is currently used by the NYPD as a parking garage.

Sources familiar with the site said that it can accommodate about 300 apartments.

The city said the planned development would include affordable housing as well as some market-rate units and retail space.
Posted by Queens Crapper at 12:43 AM

This shit cracks me up. First the article talks about the city wants to transform a run-down garbage into housing/retail development. But the “run-down” property (which it is, a mess with garbage all over and high weeds during the spring/summer) is actually city property, so the City itself allowed this property in a community of color to become run-down. Why?

Second, toward the end of the article, it states several developments have been planned for the neighborhood, which once succumbed to “crime and neglect” is once now becoming a “vibrant hub”.

Let’s talk REALITY, not this made up bullshit. First off Jamaica is not nor right now is it a “vibrant hub”, whatever the hell “vibrant hub” means. If by vibrant hub, you mean filthy, garbage strewn sidewalks and streets loaded with crap, low-class third world dreck retail that looks like some slum retail in a third world country, then yes, it is a vibrant hub, but please do not make it out to be something that it is not, at least right now.

Crime and neglect is still very much apparent and real and this city owned property is a perfect example of neglect and we who live here in Jamaica know all too well the crime, major garbage issues and other quality of life issues in this community that have gone on for years and have not been addressed by city agencies and elected officials.

So stop insulting our intelligence with this bullshit and try infusing some REALITY into the picture.

there is a paradox-like feeling in the reporting of the dual effects of development and gentrification by DNA info,also by the New york times.

sure on occasion they have to report about the effects and causes which they do well of course,but the majority of their articles seem like advertising for the developers and the potential of the areas that are targeted.its like they are copywriters for realtors and the mayor's department of housing.

these news sites including the daily news and ny post are fabricating,actually creating news stories about these towns,like previous stories about ridgewood,maspeth,woodside and jackson heights(remember those places of interest?what happened?)to drive up interest and value.reality and an informed public will only fuck it up.