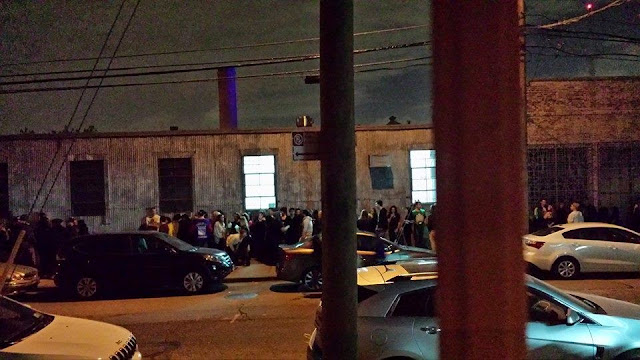 Word has come in that a concert held on Veterans Day at the Knockdown Center resulted in a really long 8 hour line, no potties for the revelers, lots of public urination, trespassing and littering and the parking was a disaster. Here's footage of one of the attendees who got caught with her pants down: 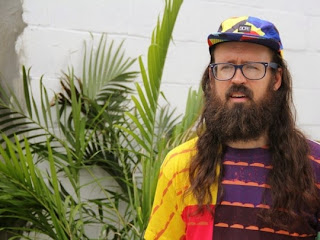 Oh and remember "TransPecos" which was supposedly applying for a liquor license so they could pay for an A/C for mentally challenged students that they invite to play there during the day? They sailed past CB5 but then messed up big time and their liquor license was denied by SLA. Why? Word is that they stupidly posted a "BYOB" sign in their window and got raided by the NYPD and liquor was found. Whoopsie! Now they're calling electeds like mad in an attempt to try to fix their boo-boo. 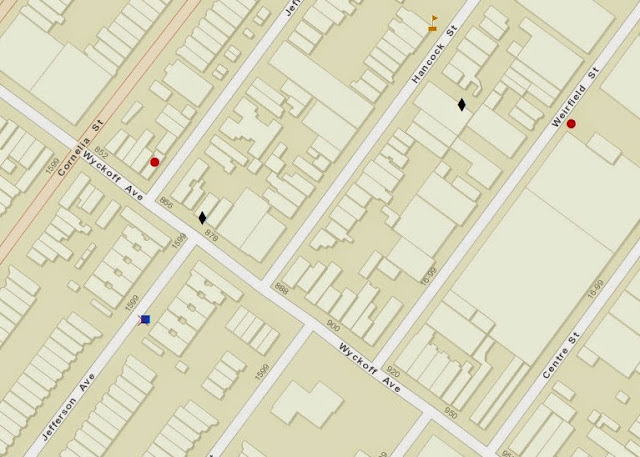 Want proof? Above is a screenshot of SLA's map of current and pending liquor licenses. You'll notice the absence of a colored dot on Wyckoff between Hancock and Weirfield Streets. That means the application was 86'ed.

As a good friend stated when this was brought to her attention, "Welcome to the generation of geniuses who will be paying our social security kiddo. Be afraid. Be VERY afraid."

I also thought I would point once more out that Council Member Crowley supports both of these venues... and one of them isn't even in her district.
Posted by Queens Crapper at 12:38 AM

Is anyone surprised after the comments left by TransPecos supporters on your original post that the venue owners are that stupid?

I wish all these "hipsters" would disappear back into the holes they came from.

"These are the people who are going to take care of me when I'm old."
"Don't count on it."
--The Breakfast Club

this is the new gilded age

generation gentrification or maybe generation public urination/defication has literally marked their territory.The little douchehag in the video even name dropped the police precinct,challenging that nice vigilante to do it,like nothing will happen.which disturbingly might be right.

in a way,these congregations,whether its this abomination or the ninja biker gangs on the streets or the car clubs in flushing meadows,don't seem to interest the local cops.Is it because there are so many of them?what are they,too big to jail?the nypd seems to have no trouble when the crowds get big for protests but they are invisible for these "events".

rest assured nothing will be done,because they spend and spend,so their behavior is excused and enabled.Forget lizzy,mayor mccray seems to like these dopes,for they will be the ones who will benefit from the affordable housing plan once they ruin ridgewood and maspeth for the middle class and working poor to rent regular apts. there.

I'm not concern about social security yet,but for now these little shits can vote in elections

That picture of the dude in the glasses never gets old.

Knockdown Center rented their property out to Honda that night. Honda hosted the party to promote the release of a DJs new CD. The promotion wasn't meant to bring in a big crowd, but the DJ is in the top 10 most famous DJs, so of course he will attract a lot of people. No matter how little the party is promoted and advertised, such a famous DJ will always bring in a large audience. Honda was responsible in organizing the entire event. Knockdown Center should have realized what they were getting themselves into, but they were probably given a nice fat check from Honda

I don't blame them for taking a nice fat check from Honda. I don't understand why people were lining up for a free concert at 11am. The place holds 5,000 people and I doubt that many trekked to Maspeth to see a techno DJ.

If you are depending on social security, it's time to rethink your retirement plans.

No, and I recognize a joke when I read one.

That kitty has a lot of class!

If the older generations hadn't collectively sold out for cheaper products and moved manufacturing and jobs out of the Midwest, these "little shits" as you like to call them would not be flooding the city as the only place they can find decent work. Go f*** yourself, JQ

You really think these kids are flooding NYC for manufacturing jobs? Are you in la la land? They think the world is a summer camp, and NYC is where they want to be able to say they live because in Bumblefuck, Utah, that would make them heroes. These are the "creative types", capisci?

I would like to know where is this decent work and if this work is the same kind I keep hearing about where the wages are small and the hours are short.

do these little shits equate manufacturing with creating?what like putting kale on a burger,making apps for lazy minds,mixing music on a laptop,wearing clothes that was obviously put on by throwing laundry on the floor and rolling on it and seeing what will stick?

Being a native new yorker,and unfortunately not creative,
I have been trying to find decent work for half my life,but the majority of the time I have been fighting to keep my job steady,and that comes with perks like wage theft and intimidation.I don't think I'm alone


as for selling out,what you kiddies are shilling and consuming are overvalued cheap products that are made overseas.the smartphones,tablets and laptops assembled in china,and the rare earth metals that function them(http://en.wikipedia.org/wiki/Coltan).

I guess I got to some of you,what took you so long.

now get out,actually you can have it,because it's gonna blow up.

and that picture of sid marty kroft gets funnier,makes me rethink my position on profiling.what a fucking amateur.

If a person/group/congregation/organization/self-labeled association of some kind wants to do something somewhere, all they need to do is follow the law. These rules and regulations as archaic as some may appear, are there for a reason. Trying to circumvent them just leads to the lost opportunity to have done it correctly.

If a place/space/parcel has the potential to actually have a liquor license, follow procedures and eventually you'll get it. Thumb your nose at the process and pay the consequences.

Why are they behaving like dummies, they blew their opportunity to having an actual legal and potentially lucrative business.

Ignorance/stupidity/apathy are no longer acceptable excuses.