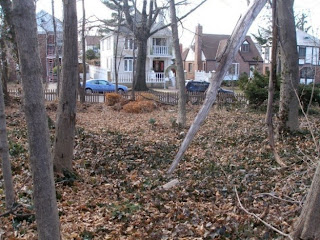 A preservation group is trying to save a colonial-era burial ground in Fresh Meadows from fading away.

The Brinckerhoff Cemetery was designated a landmark in 2012 by the city. But the small plot of land is privately owned by Linda Cai.

“If we didn’t fight for the cemetery this could have been developed and the grounds desecrated,” said Yolanda Dela Cruz-Gallagher, president of Friends of the Brinckerhoff Colonial Cemetery. “And we could have lost the historical essence of our forefather.”

Dela Cruz-Gallagher and her preservation organization are raising money to buy the property. The current owner is asking for $150,000.

“We have no money,” Dela Cruz-Gallagher said. “And so we’re asking the public for support.”

Dela Cruz-Gallagher and other Queens historical groups believe there are over 70 tombstones in the cemetery, but none of them are visible due to the overgrowth of weeds and a lack of maintenance.

The Queens Preservation Council doesn’t have any plans to financially support Friends of the Brinckerhoff Colonial Cemetery. But Grubler said that doesn’t mean they won’t help in the future.

In 2012, when the site was designated as a historical landmark, former City Councilman James Gennaro lobbied hard to win the site’s landmark status, according to earlier reports.

Council Member Rory Lancman has promised to fund the acquisition.
Posted by Queens Crapper at 12:39 AM

Notice that anything that stands in the way of development, be it a community historical society or even a freakin' place where people are buried, it sweems below the radar of our media hogging elected officials that always seems to be 'proud' to this bullshit or 'amazed' at that voting block.

No funding? That is bullshit.

They just don't give 2 shits.

And when it means that people's final resting place is disturbed so some slime ball developer (that makes a two bit donation to a slime ball politician) gets their way, our politicians are beneath contempt.

Rory, step up to the plate and make it happen. My strategy would be to reach out to any known descendants of the Brinckerhoffs, Dutch-American organizations and the major engineering firm Parsons-Brinckerhoff, among others.

Similar to how Martin's Field in Flushing was transformed into a tastefully-designed memorial park and how Remsen Cemetery in Rego Park is now a memorial to local revolutionaries, Brinckerhoff can be saved.

If this was in downtown brooklyn or in Manhattan, the city would be tripping over themselves to hand out money to save this place, but this is in Queens, so fuck us.

The Landmarks Commission protects communities where the average voter is on the positive side of the meter. Manhattan. Brooklyn. The Bronx, hell even Staten Island.

In Queens, where the average voter accepts everything said to them, the Commission only does a few officially sanctioned efforts (like the Clock Tower Building) but spends most of its time preparing reports for developers that show 'sensitive' areas, like cemeteries, so said developers do not have surprises.