S.I. elected officials as lame as those in Queens 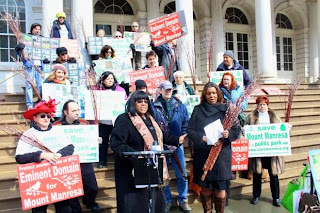 Elected officials and nearly two dozen residents rallied on the steps of City Hall on Wednesday to try and stop the development of the former Jesuit retreat house Mount Manresa, a week after crews began work on the property.

Councilwoman Debi Rose introduced a resolution to push the Savo Brothers, who have said they will build condos on the historic site, to instead preserve the 15-acre land in Rosebank.

"Today, I am pleased to have introduced a resolution calling on the new owners, the Savo Brothers, to protect and preserve in its current form the land known as Mount Manresa. Mount Manresa is Staten Island history.”

A resolution? They mean absolutely nothing, but look nice on paper. Staten Island Crap coming soon.
Posted by Queens Crapper at 12:10 AM

All politicians in our city are always late to the party. How lame indeed! Remember, it's not an election year so what do they care anyway. Lazy , lying bastards!

Actually, this development got a blessing from NYS Supreme Court... State and Local politicians have been trying to work around this for a while, but got nowhere. They should have started with a condemnation.

Actually, this development got a blessing from NYS Supreme Court... State and Local politicians have been trying to work around this for a while, but got nowhere. They should have started with a condemnation.