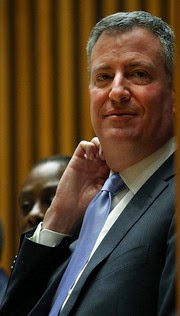 He has no objection to super-sized developments, a concept that seemingly flies in the face of his image as a leftist who hails from a Brooklyn neighborhood known for low-rise buildings and liberal politics.

"I hope people hear me loud and clear that the only way I can achieve my goals is if we are building and building aggressively," de Blasio said last month, saying he possessed a "willingness to use height and density to the maximum feasible extent."

De Blasio has vowed to pursue a policy of largely mandatory inclusionary zoning, which would require developers to set aside a portion of a building's units for poor and middle-class New Yorkers in exchange for authorization to build bigger and taller structures. Bloomberg only encouraged, and did not require, such measures.

The administration also wants to legalize some illegal basement apartments, change zoning rules in increasingly mixed-use neighborhoods, fight Albany for more rent-controlled apartments and direct $1 billion of city pension funds to the construction of lower-rent units.
Posted by Queens Crapper at 12:03 AM

Alright Blaz, and how are the people in all these new large building going to get around? The MTA is broke, and you refuse to help out. Either by having the city foot the bill for rail expansions, modernization of signal systems on existing lines to squeeze out a bit more capacity/prevent the whole system from grinding to a halt as aging systems fail, or for ongoing operating costs; working with your union buddies to get them to move on antiquated work rules, either to cut headcount, even if just through attrition, or more efficiently using existing workers to provide more service to NYC residents; or even to use your political capital to push Cuomo to stop raiding the MTA so he can cut taxes to prop up his prospects for higher office.

High density requires rapid transit expansion. You'll have to build those new subway lines aggressively as well. I'm not holding my breath on that one.

John Lindsay II only worse R.I.P New York City its the end for sure

maybe I am missing something here but what is the advantage of packing large numbers of poor people together like rats? what type of quality of life will there be for them and for people who have money?

Kind of hard to do when you have no room for parking. I tried parking in Brooklyn and it's an absolute nightmare! Manhattan is even worst than that!

I he also going to buy everyone gas masks when we are so over populated we can't get clean air?

You get what you vote for. Less than 24% of NY voters turned out, this guy is the result.

In the psych trade it's known as "overcompensation". Maybe Bill's got an undersized penis.

This jerk wad leftist is gonna be a one term mayor.

Di Blasio is a closet Communist.

Build mega Soviet style and pack in the proletariat.. Uh...more huddled masses he hopes will vote Democrat and give him a second term.

Das Mayor Wilhelm is already running for his second term.

Bring back the old tenements Bill! Only this time, instead of 6 stories its sixty, with no elevators.

We have a hard enough time funding the city pensions, how are we going to use 1 bill of it for housing?!

by making these apartments small people won't spent much time in them. so they'll have to go outside and to restaurants and coffee shops and other places fueling the city economy so we can pay off all the debt generation greed has left for us. they can afford to go out and spend money like that because they won't be getting a car. hi density necessitates low car ownership. it also requires transit expansion and walkable neighborhoods. bill isn't doing anything to support either. big buildings without them is a disaster.

Why do we have to keep building in this city. There comes a point where you have to say enough is enough. What is the benefit of cramming all these people in here?

Not one more development should be allowed in this city until the roadways, highways, and subways are upgraded. The water, power, gas lines, and sewers need to be upgraded as well as most are beyond their design capacity and beyond their intended life expectancy.

"This jerk wad leftist is gonna be a one term mayor."

Unfortunately he will get a second term, not because he is benefiting the city, but because no one will go and vote, except his diehard progressive followers.

I wish this guy would stop sucking up to every immigrant group.

Send these people and their anchor babies back home. NYC is full. Pay them to move to another state - and to stay there!

Looking the train frequencies, platform length, and signal capacity, there is some room to expand service:

Divert AM rush A train from Rock Park across Midtown for one seat ride from Rock Park to 53rd st Midtown corridor, and take up some of the crowding on that stretch on the E.

B train between Bronx and Brooklyn

J,M,Z along the Broadway El and over Williamsburg Bridge (hello Broadway Triangle).

CBTC in progress to bring up Flushing line capacity with added train cars on order or already delivered. One early use could be to divert NJ and NY commuter buses to Javits Center for 7 train link.

J,M,Z, L, G currently run short trains on lines that can handle longer trains. With the J,M,Z and L they used to run 8 67ft car trains. They now run 8 60ft car trains. There is enough space to squeeze one more car for a capacity boost of 12.5%. G trains car run 6 or 8 75' car trains instead of 4 75' car trains. Mind you union rules require all train 300' long and up have both a train operator and conductor.

There is another thing to consider: locations for schools.

It is very difficult to get land for schools. if you provide conditional upzoning for developers, have the new building(s) have s school at the base with a catchment zone sized and shaped so that it is small enough to have no school buses (except special ed vans). That way, you deal with traffic from the hulking school buses.

he's just doing whats expected of his constituents(the 24% who showed up)and benefactors(the realtors that was donated by mayor fun size).This plan is similar to the affordable care act.Sure it was written with good intent and it will help in the long run,but access will be difficult and impossible,and the only ones who wind up capitalizing on this are the wealthy yet again.

also,I don't want to live amongst imbeciles who are willing pay 3000 a month for shoddy apt.I have no desire to socialize with tards like that.