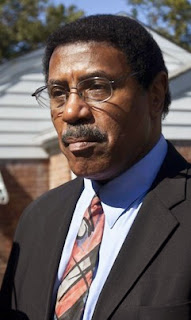 The FBI raided the Albany office of a Queen state assemblyman Wednesday morning.

The FBI raided his home in Queens, his district office, his Albany office and his Albany hotel room.

He said they took his records and his smartphone.

The veteran lawmaker in 2012 led the Assembly in putting in for travel expenses known as per diems — $33,986 worth.

Assemblyman William Scarborough led the chamber in putting in for travel expenses.

He has regularly been among the per diem leaders in his chamber.
Posted by Queens Crapper at 12:03 AM

Another one bites the dust. What about the rest of them?

Weasel's all of 'em. That whole South East Queens Ratpack, Scarborough, Meeks, Smith, all weasels. I cannot wait until they get around to Sanders.

Perhaps one of Malcolm smith's opponents will now run against Scarborough instead? Clyde, Munir, how about it?

And the dominoes are falling all over again in Jamaica.

Next Jamaica elected leader to go down, Assembly Member William Scarbrough. And you wonder why Jamaica is the big mess it is, crooked, corrupt, useless and just plain damn lazy elected leaders.

And of course there will be knuckleheads out there who will say, but he is a good man, this is a lie, blah blah, blah, just like they have said about Huntley, Meeks, Smith, Wills, Cook, Comrie and the rest of the useless Jamaica Crew. There is no coincidence why Jamaica looks the way it is and the bad conditions that have persisted for years.

We need to wipe the slated completely CLEAN!

Time to get people like Clyde Vanel, Bernadette Semple, Munir Avery, Greg Mays. This batch we have now are rotten to the core and our community has suffered greatly because of them.

Scarborough is as phony as that "black hair" on his head.

And the dominoes fall yet again on the corrupt, crooked, useless and just plain lazy elected leaders that have failed the community of Jamaica in a huge way due to their greed.

As yet another Jamaica elected leader, Assembly Member William Scarborough, gets investigated and whether he is innocent or not (let’s face it, if the FBI is investigating, you did something), one thing is for certain, Jamaica’s leaders past and especially present have failed Jamaica miserably. Let’s face it, if that was not the case this community would not be in the shambles it is, a major garbage problem that has never been properly addressed, garbage strewn vacant lots and abandoned houses, junked and unlicensed cars parked all over the streets and sidewalks, mostly from the Thug Auto Body Shops (though in the last two weeks the “The Untouchables”, Sgt Cedillo and his crew from the 103rd have been putting a stop to that, in no part to our leaders), illegal apartments, improper garbage disposal and bad over development that allowed 1-2 family homes to be torn down to to put up crappy low class third world apartments with absentee landlords. just to name a few.

I mean how do you explain these awful quality of life conditions in Jamaica for years, when some one like Scarborough has served in the legislature for 20 years and was also Community Board 12 president as well. Just a few blocks from his office streets and sidewalks are littered with garbage and litter and auto shops have junked cars on the public streets.

How do you explain this major garbage problem, one of them right in former Councilman Leroy Comrie’s backyard of St. Alban’s, the St. Albans Little League field parking lot, while Comrie was in office for 12 years.

How does Councilman Ruben Wills get elected a 2nd term, when we had the chance to elect someone else, while his district is far from the cleanest.

Assembly Member Vivian Cook has not done jack shit for her community in decades, yet she is still in office. Senator Malcolm Smith, possibly heading to prison, is running for re-election and then there is one of the most corrupt officials of all, Congressman Gregory Meeks.

This is all totally mind blowing that we have so many corrupt, crooked, useless and just plain lazy elected officials, while our community had been going down the toilet for years. Yes, they are definitely to blame, but so are our residents who keep putting crap like this in office. When the community had the chance to put someone fresh in Comrie’s councilman seat, what did the people do, they put in Comrie backed I. Daneek Miller. Comrie had done little as far as quality of life for Jamaica in his 12 years, so why would you put in office someone that he backed. You know you are just going to get the same old shit and nothing will change.

Well, it is time for change in this head in the sand community who does not want to face the truth or facts and begin to wake up. Your leaders have failed you and that goes for many of the dozens and dozens of church leaders.

These elected leaders have played you for total fools and you believed the bullshit and now what are you left with, a garbage strewn community that is falling behind every other community in Queens and this is all due to the poor, inept quality of leaders that you, the clueless residents keep putting into office.

Take every assembly member and senator, and audit their:
1) expense accounts
2) resumes (for fake degrees and experience)
3) actual living space (for fake addresses in their district)
Terminate all of them with proven false info.
Then find replacements for the 2/3 of the assemby and senate who will fail these audits.

And where is the Jamaica BID in all of this? Could it be that the lions share of discretionary funds is going to help subsidize the BID and it's " community-based " programs?

Hey, Adam did a pretty good piece publicizing Gregory Meeks' title as "Most Corrupt Congressman". Jamaica continues to be proud of its sons.