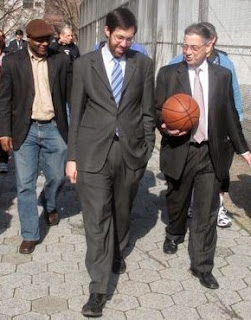 State Sen. Daniel Squadron (D-Brooklyn) has introduced controversial legislation — supported by Mayor de Blasio — that would force certain park nonprofits to allocate 20% of their budgets from private donations to other parks — a means, he says, to help address the inequity.

Under the plan, a “poor” park would perform tasks like gathering signatures from local residents, establishing its own conservancy group. It also would need a commitment from the city and local lawmakers to maintain the current level of public financing.

This well-intentioned but deeply misguided law shows a clear lack of understanding of the enormous problems facing our vast but resource-poor park system. Relying on what, in reality, are a few conservancies to deliver the tens of billions of dollars in capital needs, and another three quarters of a billion dollars annually for maintenance and operation, is deeply misguided.

Squadron testified Thursday that he thought his proposal could generate approximately $15 million dollars annually; in other words, enough to build a few bathrooms.

Another unfortunate consequence of this conversation is that it is detracting from the real issue — that our elected officials refuse to fund parks as an essential city service.

The administration needs to take responsibility by dramatically increasing the parks budget and ensuring the funds are distributed according to need — not on politics or private interests — while demanding accountability from an agency that is in desperate need of reform.

We need to attack the very system that allows and encourages this enormous disparity and discrimination in the first place, not invite more.

Until these things happen, nothing will change.

The full op-ed can be found here.
Posted by Queens Crapper at 12:26 AM

It does trouble me when you see the Central Park Conservancy spending millions to landscape every square inch of CP, when hundreds of local parks and playgrounds go neglected in the boroughs.

I want to see the parks better funded, but the DN is dead right on this.

Fieldson school to Yale to the DOE to your pocketbook.