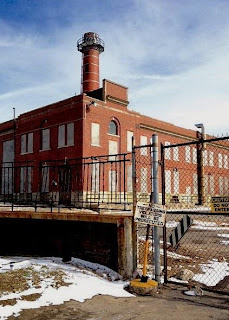 Waiting might be the new pastime in Rockaway. Residents wait for sand replenishment, for Build It Back to get started, for a new boardwalk, insurance payments, building permits, and so on. With all this waiting, it’s easy to overlook a soaring symbol of idleness – the Neponsit Health Care Center, closed since 1998.

Nearly sixteen years after it was abruptly closed on orders from the Giuliani administration, the beachfront property sits unused and decaying but costing the city plenty.

The Neponsit property, located at 149-25 Rockaway Beach Boulevard, is maintained by the New York City Health and Hospitals Corporation (HHC), and it pays a lot of money for it to sit idly. The various buildings aren’t being used but HHC says it pays $266,000 annually for security and basic repairs to the property. When asked about Sandy damage, HHC made no mention of flood damage but said that “the property sustained significant damage to the guard booth and fencing as a result of Hurricane Sandy.” The cost for repairs: $139,000.

Even though it is has been pouring hundreds of thousands of dollars every year into the crumbling eyesore, HHC says it has “no plans for a new structure or new use of the property.”

A covenant in the deed for the land says that it can only be used for a park or a public health facility and this can only be changed by an act of the state legislature.

Many ideas for the land have been presented at various meetings. A hearing was held in November 2006 as HHC wanted public comment on a plan to turn over the facility to the City of New York and opening the site to the development of single family homes. This idea received mixed reviews. Some community members offered alternative suggestions such as a hotel, a school and a rehabilitation center for “Wounded Warriors.” Following the hearing, the HHC vote to turn the property over to the City was postponed indefinitely and the buildings continue to go unused. The carrying costs continue as well.

The land can only be used as a park or health facility, so naturally, the city wanted to develop it into homes.
Posted by Queens Crapper at 12:51 AM

".... opening the site to the development of single family homes."

If they are going to build residential facilities they should either convert the existing structure to apartments, or insist that individual homes be built of storm and fire resistant design.

Otherwise, it is just more people to bail out whenever a significant storm hits.

NYC wastes so much money on things but not enough money goes into the crumbling roads or schools that are used everyday. NYC has It's priorities messed up!

this place still has security guard too.

Making this place for disabled vets,and we have lots of them from the illegal wars and occupations in Iraq and Afghanistan,and with future wars for territory and energy(we are using navy seals to save oil tankers now),would be the best idea,since it is a hospital.

i wish i could get in there to walk around.