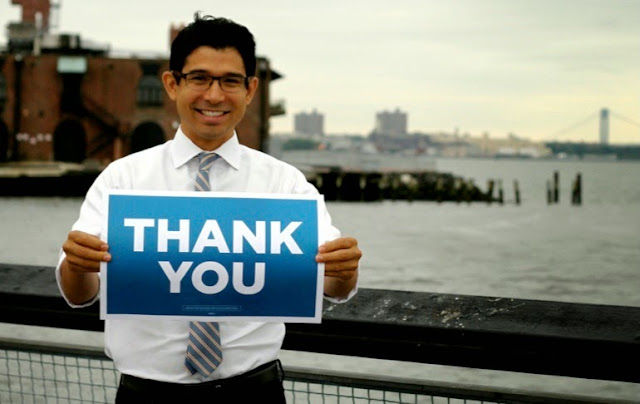 Another progressive whose TIE fundraising appears to be incongruous with his politics is Councilman Carlos Menchaca, who, like Johnson, was selected as a freshman by his borough colleagues to be a co-leader of their respective delegations. Menchaca ran as a reformist insurgent against Sara Gonzalez, whom he vilified as a tool of “Manhattan millionaire developers” for receiving support from Jobs for New York, the Real Estate Board’s independent expenditure arm. But soon after taking office, Menchaca accepted $1,500 in TIE funding from Taxpayers for an Affordable New York, which is essentially run and funded by the same major property owners who spearheaded Jobs for New York.

Menchaca also took $1,500 from John Ciafone, a Queens lawyer and property owner who was listed on Public Advocate Bill de Blasio’s Worst Slumlord watchlist in 2011. De Blasio returned two large contributions from Ciafone when it was revealed that he was a donor, but Menchaca is apparently untroubled by or unaware of whom he is accepting from.

John Ciafone’s wife is Gina Argento, the CEO of Broadway Stages, a large television and film production studio and sound stage company in Brooklyn and Queens. Argento and her brother Anthony Argento are prolific contributors to political campaigns, and each gave $1,500 to Menchaca’s TIE committee.

Last year the Argentos applied to have a subsidiary company, Luna Lighting, receive a license to operate as a trade waste business, which would allow the company to cart demolition and construction debris from worksites. As the Argentos have ownership interest in many industrial sites that they would like to repurpose for other commercial uses (for example, the Knockdown Center in Maspeth), owning their own demolition hauling company would provide vertical integration to their business. The city’s Business Integrity Commission issued a harsh denial of the Argentos’ application, citing a history of illegal carting by Luna Lighting, and also misrepresentation by Anthony Argento of his arrest record.

Furthermore, Anthony Argento was shown to have over $1 million in federal tax liens against him, as well as his business. As of April 2013 Argento owed the Internal Revenue Service more than $600,000. This information was all published by the city and is a matter of public record. One imagines that Menchaca or his staff must have done some cursory analysis of who was giving him money. Or perhaps the Argentos have papered the city with enough contributions that their questionable business practices do not raise the eyebrows of even the most progressive elected officials.
________________________________________________________

"Today's reformer is tomorrow's hack." - Meade Esposito
Posted by Queens Crapper at 12:29 AM