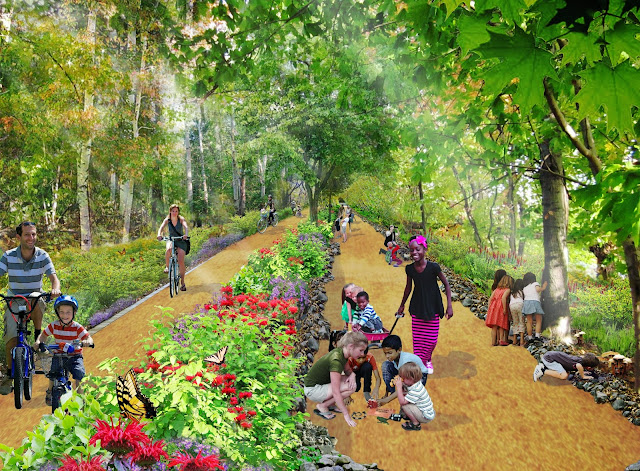 The Friends of the QueensWay and the Trust for Public Land rolled out a new series of design concepts in anticipation of the group’s upcoming public workshops in Forest Hills and Richmond Hill.

The group announced its second round of community workshops earlier this month as part of the QueensWay feasibility and planning project with hopes of engaging the public in plans to transform an abandoned 3.5-mile stretch of railway into a 47-acre linear park and cultural greenway. A series of preliminary design concepts were released this week, showcasing the QueensWay team’s site analysis and ideas contributed by area residents during recent months.

Each of the early design concepts showcased greenery separated by sprawling walkways for Queens residents to peruse. The Friends of QueensWay spokeswoman said the group hoped it would influence a positive dialogue as the QueensWay feasibility and planning study progresses past its early stages.

I admire this group's enthusiasm and persistence (half a million dollars from TPL helps) but is this a realistic portrayal of what a park in central/southern Queens would look like? Identify where the money for building and maintaining this fantasy is expected to come from and then the community could actually have a meaningful dialogue about it.
Posted by Queens Crapper at 12:34 AM

that picture is hysterical and a target for satirical photoshopping.that bike lane looks hazardous.and the diversity makes one want to join the klan or the nation of islam.

watch out for this and strike it down,because when they built that high line in manhattan,it drove out tons of businesses like auto shops and meatpackers to make way for luxury development and art galleries no one goes to.the city is trying to push out the working class in favor of the pseudo creative app makers,venture capatalists,and the neoprogressives.

push those motherfuckers back.

Does it come with an entirely new population of educated, classy people with a sense of civic values?

This picture looks like another version of "the wizard of oz" yellow brick road. NYC can't even take care of our current Parks properly so if they build this, I guarantee you that this Greenway will look like garbage in a few years.

Yeah, that picture is a bit ridiculous. No Queens park will ever look like that. After about 2 months of opening it will be run down with trash along the sides and dead plants with weeds growing all over the place.

How come the artist didn't depict a drug addict mugger behind one of those trees? Or maybe he's already overdosed and dead and that's who those 4 kids are looking at on the right?

Where are the unicorns pooping skittles in this view, the rainbow and the pervert junkie exposing himself behind a tree?

oh,where are the half empty styrofoam chicken and rice containers and empty corona bottles?

wow, so many places to smoke crack and sell your ass in.
thanks guys.

what happened to the Railway line that was proposed by Philip Goldfedder?

Far out man! Like, dig the flowers. The sun even shines under trees, man. I swear the street is GOLD! Wow. Intense. Hey look... the street is BREATHING!

What was in that stuff, anyway, man?

I wouldn't want that on my back yard HELL NO!!!
That photo caricature (or should I say cartoon cell) is really daunting, it looks like when the "Ice Road Truckers" shot on location in streets and mountain slums of India.
All that's missing is the cows & sheep !

I can tell the artist that ass sneezed this this hinee kabob of crapacature was some politically correct punk trying to reinforce and promote his or her brain-dead ideology. When you hear someone promoting such diversity and puffery, consider that person an anti-American stooge. All punks have a sinister agenda that is usually anti-American, anti-free-market, and anti-Queens.
It was western culture, values and traditions, our grandparents which is what made America great and created what was once the greatest quality of life ever. Weakening this methodology under the artful guise of diversity, multiculturalism and PC bullshit is just as insidious a threat to America as are voodoo-inspired terrorist punks and sheeple.

The railway line plan is still a contender and would make significantly more sense than this park.

Parks are nice and in short supply in Queens, but so is vital infrastructure that could better clean the air via removing some of the millions of taxi trips to JFK.

bad photoshopping.
Also George are you the drug addict/mugger?

This looks like a lost Sid & Marty Kroft pilot that did not get picked up by the networks.

Someone actually gets paid for this shit.

A muggers paradise if there ever was one.

Mug the "park" users and escape to a stolen car parked a block away. Let this happen a couple of times and the so called park will be a no man's land.

To the people still hoping for a new rail line, that is ever more far-fetched than this bike trail fantasy. Can anyone tell me how heavy machinery would be brought in between the tight row of private lots to perch atop a narrow earthberm and make a totally new railway there? Because there is nothing salvageable at all from the previous line. Also, what makes anyone think the city has the interest and money in making a new line for the people of FAR RockAWAY to get to Manhattan or JFK (which I believe is right next door to Far Rockaway on the map). Second Avenue subway, yes, there's money for that, but this pie-in-the-sky, nope. Not in a million years.

The ROW that exists is already being put to its highest best use by trees, birds, small animals, and the people lucky enough to have property bordering it.

These Queensway folks are like Columbus "discovering" America. Look what we found! No one knew it was there but we found it and we're gonna turn it into a park/bike path/community meet-up place/ nature trail/science lab/food truck place/art show/etc.

Great idea, if Queens had the right class of people in it to enjoy and not destroy a park like this. Also I think the city should try to maintain the parks it already has in Queens because they haven't been doing such a good job at that.

Plenty of tall grasses along the sides for skells to sleep and shit!

Oh how true! It would be mess in a few days.

They want a rail line/ express monorail make the Casino pay for it because that's who would be benefiting the most from this.
Most them people in Rockaway dont even work or pay taxes. I'm not sure how many in Queens or Manhattan work (or would even want to work)in Rockaway unless they drive. Whats out there, a couple social services a bar's and a hospital ?
That commute TOTALLY SUX no job's worth it or pays.

They put a bike trail in Cunningham Park about 10 years ago. Nobody took care of it and today it is in ruins. Queensway would need an army of maintenance and security personnel. But where would the funding come from?

Outside of privately-owned Gramercy Park and parts of publicly-owned Wave Hill, is there anything already in existence in the city that looks remotely like this illustration?

All that's needed to complete the picture are some people flying overhead wearing jetpacks.

The Queensway as envisioned will be artificial and require much upkeep. The appeal of Forest Park is that it is wild (and I don't mean that in the sense of the human element). I don't want the Queensway to encorach upon that. Just pick up the trash dumped by the criminal and uneducated in the wild park and we'll all be ahead of the game.

Are you aware that running the train line again would have a train running directly across the street from an elementary school (P.S. 65Q)?