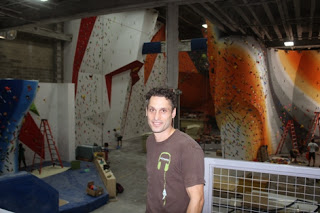 The owner of the Cliffs at LIC, a gigantic indoor rock-climbing center located on 44th Drive, reopened today after being shut down by the Building Dept. in October for not having a valid Certificate of Occupancy.

“I feel the world has come off my shoulders,” said Mike Wolfert, the owner of the Cliffs. “They put us through an intensive audit.”

The Cliffs had its grand opening last October, but was shut down just three weeks later. Therefore, Wolfert said, when he reopened today it felt like a grand opening once again – especially after the climbers began to scale the walls.

The Cliffs, located at 11-11 44th Drive, features more than 30,000 square feet of climbing space — including walls that tower up to 60-feet high. The center also has a gym, which is fully equipped with strength-training equipment and cardiovascular machines.

However, the past year has certainly been no party for Wolfert.

He had planned to open in May but complications with the building department — including his arrest for allegedly bribing a building inspector – delayed the opening.

However, when he did open in October an anonymous complaint was filed that alleged the Cliffs had violated city zoning laws. While that complaint was unfounded and dismissed, it led to a building inspector coming to the facility and reporting that he did not have a valid Certificate of Occupancy.

So did he bribe the guy or what?
Posted by Queens Crapper at 12:12 AM

What does it matter. Should his entire business and investment be forfeited even if he did?

That's not the point. The entire story was not reported here.

This did NOT have a proper Certif of Occ.It now has a temporary, which expires 6/12/14. He's not out of the woods yet.