Is this the LaGuardia of the future? 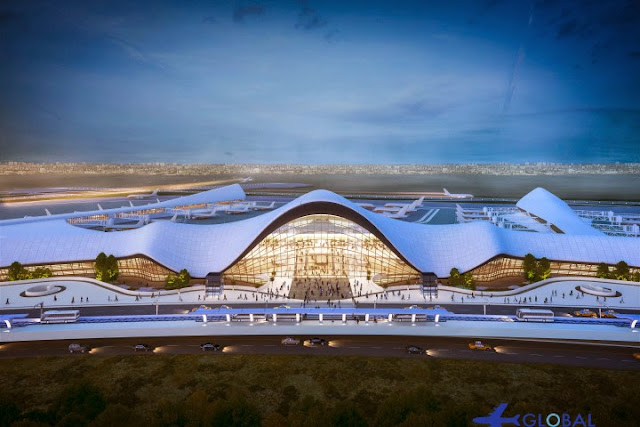 This is what LaGuardia Airport could look like by 2021 — a far cry from the current dilapidated “Third World” facility.

Manhattan design firm Neoscape created renderings for the advocacy group Global Gateway Alliance that showcase a modern-looking airport with an airy main terminal, based on parameters established by the Port Authority.

The 1.3-million-square-foot space is one-third larger than the current central terminal.

LaGuardia currently handles double the amount of passengers for which it was built. About 12 million people travel through the airport each year, and the number is expected to rise to 18 million by 2030.

The new airport design leaves space for a future direct subway line.
Posted by Queens Crapper at 12:33 AM

The rest of Queens looks like a third world country too! Once nice neighborhoods now run down because of third world trash coming here!

Unfortunately queens is just about a third world country. Why are we worried when our airport represents that? Isn't that the look we are going for?

Our politicians seem so proud that Queens is the way it is. So why bother spending billions on the airport? We could give that money to all the illegals so they could get masters degrees and build housing for them so they could live for free.

I guarantee this project won't be completed until 2035 and the subway link 2050.

Our electeds must stop playing this " most diverse county" crap! Diversity. Diversity. Diversity. It's all BS and shamefully the only way to get elected these days. Our borough has been sold down the river due to this out of control pandering to immigrants. And Queens looks the way it does because of it. Shame on politicians for screwing with our lives!

Will the Air Train finally have a connection from Jamaica to LaGuardia ??

Queens needs a makeover and first start by down sizing zoning and get the illegals out! Then worry about an airport. Queens was never suppose to be a Manhattan, it was always meant for residential, commercial and manufacturing.

Down zoning would just crimp housing and work space supply and cause more Gen X and Gen Y people to move out of New York after we spent 100k+ in tax dollars to educate them.

Face the music. Even if we depot all illegals, we still have to deal with the fact that half the Baby Boomers who reach age 60 will reach age 90! The Gen X and Gen Y need someplace affordable to start their own families. There is a great shortage of safe pedestrian friendly urban/suburban neighborhoods. Most of these places are concentrated in places developed before 1930/1960.

Um, this post is about LaGuardia Airport, not the decline of your neighborhood.

I vote for demolishing the present terminal and replacing it with a duplicate of the original one from 1939, which was quite nice, if a little small.
Also there was a nice lake in front....

QUOTE : "nice neighborhoods now run down because of third world trash coming here!"
-------------------
Yup, sadly the garbage and pillaging is here to stay thanks to sheeple voters. Perhaps the left views that "new airport" as the new Statue of Liberty or monument to themselves. Diversity is America’s greatest strength, according to the left and its socialist, Marxist, commie cohorts and co-conspirators running rampant throughout Queens -new socialist mayor included.
These social-engineering liberal bastards believe all behavior, conduct, morals, DNA and beliefs make us stronger.

This discourse is pure toxic, brain-dead BULLSHIT and most born here recognize bull dung when we hear, see and smell it, and we have had no desire whatsoever to embrace it. As a result the liberal left is forcing its version of diversity throughout our society and culture. According to the left and its acolytes, we are supposed to respect people who REFUSE to respect Old Glory or learn English, look for a job or do an honest day’s work. We are supposed to respect all cultures, values, laws and religions - even when they have proved to be dangerous and diametrically opposed to our American way of life, customs, laws and traditions.

It will be a cold day in hell before I embrace voodoo-shit religions and filthy stone-age cultures NEVER !!
One real issue is the bastards like DiBlasio forcing diversity and multicultural nonsense into our homes, workplaces, schools and government agencies at gunpoint !!
A school principal in Texas was just fired for telling kids they must speak English in the classroom.
If you own a private home on a street that is not land-marked it's is time to bail !!! 6 million uncultivated wilding offspring of illegal aliens will soon be teenagers hitting the streets and coming through your windows like in Rio. They have been told America was stolen from Mexico/Central America and whats YOURS AND WHAT YOU WORKED FOR rightfully belongs to them.
Forget some airport, things are going to get much worse and you cant have a gun in NYC (or anything effective) to defend yourself when your 60 or 90 !!

Question: How to tell when it is cold in Queens?

Answer: When the foam on Ned's mouth freezes.

I love you Ned. Your nuts.

Nice summary Ned. Thanks for sharing.

Thanks everyone for your views on the LaGuardia renovation......

That's right. Stay on topic . . .LaGuardia will be renamed The Joe Crowley Airport.

Um, this post is still about LaGuardia Airport, not vivid imaginations. Opinions on the plan (most of which won't happen in most of our lifetimes)?

Direct train access to LaGuardia will not happen until at least year 2378.