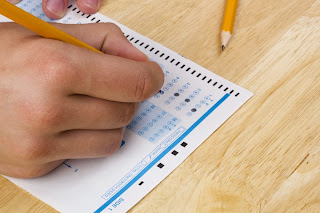 Despite their high-school diplomas, the grads failed CUNY admission tests in one or more of the key subjects, officials told The Post.

The only good news: The number of unprepared city grads dipped a modest 1.7 percentage points from 2012, when 79.3 percent of entering students needed to bone up on basics.

In releasing the damning data, CUNY cited success with a pre-community-college program it started four years ago to tackle the flood of unready students.

“CUNY Start” takes mostly high-school grads who fail at least two admission tests. They agree to postpone enrollment for up to six months to focus on raising their skills. Upon completion, about 70 percent pass a test they failed before, and 48 percent become “fully proficient,” or college ready, ­officials said Friday.

The abundance of ill-prepared grads is cited as evidence that city schools have handed out credits like candy to push kids along and out.
Posted by Queens Crapper at 12:47 AM

The NYC public school system is the most worthless, corrupt and embarrassing institution in the entire country.

Sending your child to a NYC public school could arguably be a form of child abuse!

12 years of school and not being ready for entrance to a Community College !
"Something is rotten in the state of Denmark."

77.6 percent is a little misleading. Remember this is all the high school graduates who couldn't make a 4 year college and were forced to enroll in a 2 year community college. I'd like to have the same statistics on all the graduates. I'm sure it's still not great but more revealing.

I think it's time we let this "No child left behind act" go. These kids deserve to be left back. If humiliating these kids is a way to make these kids learn, then I say do it. How can you pass kids who don't even know basic math?

What percent of the teachers are ill-prepared to teach?

this is what happens when you attract people that are the gutter of the world - they raise ignorant kids.

100 years ago people jumped at the chance to further their kids.

today they know the real ticket out of the ghetto is in sports or entertainment.

but they DO vote Democratic and they DO chase out the pain in butt quality of life types so as far as your electeds are concerned, as Honest Joe Crowely does, THEY raise THEIR kids somewhere else.

How are we ever suppose to compete with other developed countries when we produce mediocre graduates (our future) who cannot really compete in the real world.

We, as a country, no longer produce anything, except debt, so many live in poverty in this country, our infrastructure has been falling apart for decades, our public schools are a mess, we have no universal health care coverage like other developed nations, we have shipped the majority of our jobs oversees and major cities like Detroit have been allowed to crumble, upward mobility has pretty much become a thing of the past except for a select few, wages have been stagnate for years while profits and productivity are at it's highest, we involve ourselves in one war after another and waste billions and our two party system has split this country down the middle and barely anything gets accomplished anymore. Both parties are to blame for this mess, BOTH.

Only two of wich were in the US. The rest were spent in "schools" back home.

They come here with a 4th grade education, but because they are 15, they put them in high school, then we wonder why they cant do the work.

"Despite their high-school diplomas, the grads failed CUNY admission tests in one or more of the key subjects, officials told The Post."

Paging Federal Judge Nick Garaufis. It's time to water-down the admission tests? No? Like you did the FDNY's testing for the Vulcans.

CUNY needs accreditation and for that it needs to enroll and hopefully graduate the students that meet some standards or risk losing accreditation.

The NYC Public School system is doing great at what it is truly designed for: enriching union reps, getting teachers salaries and bennies they could never earn in the real economy, not to mention totally unrealistic pensions, and empowering politicians who also get a cut. At this, it is awesome. At educating, not so good.

It is insane to blame teachers for this. Come in and try it for ONE DAY, you ignorant morons. You have no idea what goes on in the schools these days. You just blindly believe anything the NY Post publishes. And you are jealous of our union.

You're damn right we're jealous of your union.

And our Mayor tried to close a charter school in Harlem that finished FIRST in the state in math testing. Hmmm, it makes you think.

Teachers are forced to go against what they learned in college and what they believe to be the best methods for teaching. Even when a teacher has all the best intentions, the DOE, and now the new common core curriculum, will surely stifle those good intentions, dictating what and how to teach. For years they halted direct grammar instruction in NYC public schools, in favor of a “whole language approach”. This is the result. They stopped teaching phonics and spelling like they used to in the past, and this is the result. Phonics is the precursor to reading! There is no way around it. And spelling is absolutely necessary when learning a non-phonetic language like English. None of this comes as any surprise to me. I predicted this would eventually happen when I saw these deleterious changes coming down the pike. It's high time the educational system in this city, as well as this country, goes back to basics, both with respect to teaching as well as discipline.

Welcome to the new age of New York society.

When a kid can tell a teacher, "Oh yeah, well what the "F" are you gonna do about it and the administration tells the teacher "deal with it within your four walls"...the battle is lost.

My hat's off to the comments of "Me"

I recently retired from my high school teaching job. After 34 years in the business, I have to say there is almost no real teaching going on. All that matters is test prep and getting 100% of the students to pass. My former AP blamed teachers for failures, for kids coming late, being absent, not doing hw, being disrespectful, and everything else. Kids are being taught how to pass regents exams. Understanding material is not important. Thinking is not even needed. And for those who don't pass the first time, there are after school classes, computer assignments (sometimes done by teachers). Kids are rewarded for being in the room and breathing. Even the brightest kids are not being educated now because they have learned there is no reason to study. Everyone passes.

I teach an advanced class at a local community college and have students who feel entitled, who constantly want make ups, extensions and just want to be handed a grade. College has been a rude awakening for most.

Thirty years ago we did not graduate everyone, but the ones we graduated deserved diplomas.

Keep importing poor, unskilled, marginally educated immigrants and this is what you get. The Democrats will never give up their immigration scam. It would cost them too many votes.

"You just blindly believe anything the NY Post publishes"

"When a kid can tell a teacher, "Oh yeah, well what the "F" are you gonna do about it and the administration tells the teacher "deal with it within your four walls"...the battle is lost."

And everything "Pissed Off" said.

The rest is anecdote. NYC (and the rest of the country) was doing fine with teacher unions during the halcyon days of the American Century. Now teachers are getting scapegoated because the real problems are too politically incorrect and/or cost more money. Charter schools are a red herring that cherry-pick kids with involved parents, play by a different set of rules, and get more money. And on top of all of that, they on average do no better or even worse in some studies than the public system.

In that case CUNY should not accept such students. In all countries universities either public or private are selective and by my knowledge there is no country in the world except the US to accept students who have basic math/native language problems. The University is not for everyone and not everyone shall be accepted.

why would they not accept them? they need their money.

But isn't CUNY subsidized? They should reduce their number of students to what they can actually afford. All private colleges which accept students with federal loans must prove those students find a job. Why isn't the same criteria applied to CUNY especially that they are a subsidized inst.?