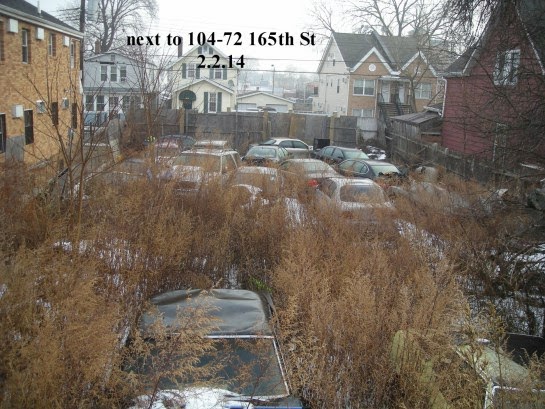 For a long time now, I have been complaining and filing reports on a vacant lot at 104-74 165th St that has had over 15 cars in various conditions, many without plates, but all I kept hearing was "Private property, we cannot just go in there" (this from some officers at the 103rd when I first reported this), "It is a sanitation issue", "We will get to it", "We need to do a long term investigation", "My mother is sick", "I have hemorrhoids", nothing but a bunch of dumb ass excuses. 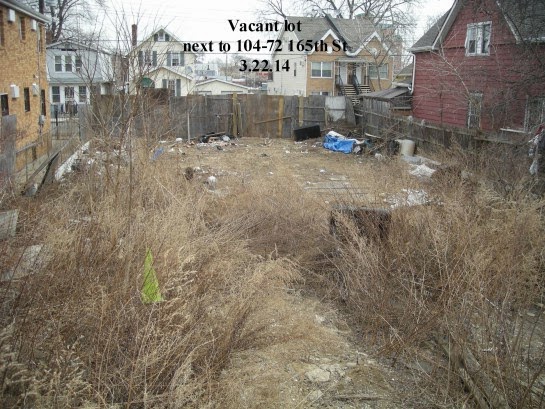 But in flew Jamaica's "The Untouchables" (Officer Sgt. Cedillo, new to the 103rd precinct and his SWAT Team), who also did some investigating, but managed to have this whole area cleaned up within a couple of days. The lot is actually owned by a very shady Albert Basal of Plaza Homes, Inc on Hillside Avenue (http://cleanupjamaicaqueens.wordpress.com/tag/hillside-avenue/), but an individual, who lives a few doors down from the vacant lot, was doing illegal auto repairs in this lot and Mr. Basal had no idea this was going on, at least that is what he told me. Anyway, "The Untouchable" gave Mr. Illegal Auto Repair 24 hours to remove the cars. And just like magic, they were gone. But is was not magic, it was something unknown to many, a mysterious thing called DOING YOUR JOB.

Another big kudos to Sgt. Cedillo and crew, who managed to do something within a few days, that others could not do in months.
Posted by Queens Crapper at 12:11 AM

I was just driving down Parsons Blvd last night and noticed a place that looked nice and classy in Jamaica. It looked brand new. It's called city rib or something close to that name. It looked real nice in there. Hopefully it Won't turn into an eyesore in the near future. This restaurant looked like a step in the right direction for Jamaica.

Sgt. Cedillo is exactly what Jamaica needs. He is a hard worker and sees something that shouldn't be and fixes it.
Hopefully more good things will happen here. Thanks !

One cop and his squad does not make a crop of flowers in spring.

What is needed is a permanent remedy and the active participation of your elected officials.

Or when that cop gets a new assignment you will be back to square one.

ANON: One cop and his squad does not make a crop of flowers in spring. What is needed is a permanent remedy and the active participation of your elected officials. Or when that cop gets a new assignment you will be back to square one.
---------------------

Such negativity from some of you. What is happening is a positive thing and after this people will see that things can get done and keep this going, so FUCK your negativity. You have to start somewhere. Some of you are such fucking negative miserable bitchers here and that is all you do behind your anonymous bullshit. Just exactly what are you doing to better a community besides hiding behind a computer spouting crap.

To the first poster: City Rib has been there since last summer and it a great place. I go there a good bit, good food, good drinks and great service, a good place to hang out. It will not be turning into any eyesore and it is a step in the right direction as is some other things coming down the pike.

This shouldn't have been published now Sgt. Cedillo is gonna get put in thumbscrews and placed on desk or court duty. Cops are supposed to look the other way in Jamaica/Rockaway unless its life or death.
The courts, DA's, judges and code enforcement would have too much of a load (and collecting) if laws were enforced on all them poor urban people and illegal immigrant future democrat lifers.
Cheers, Kudos and best wishes to Sgt. Cedillo for having some balls!!

Sgt Cedillo actually contacted me in regards to these particular matters in Jamaica when he came aboard the 103rd precinct a few weeks ago and put together his crew to focus on "conditions".

He is a man of integrity and I think the 103rd had to start to act on these issues since they were not quite doing it before he came aboard.

We need a guys like Sgt. Cedillo all over this city to get things done right. I like a man with a plan and that takes action. Good for Jamaica!

One man CAN do this! Look at how much Joe Moretti has already done with NO support :)

If the car can move, but has a bad engine or some other mechanical issue, a conventional tow truck will be used to pick the car up and take it to the salvage center.

Cash For Cars In Coquitlam