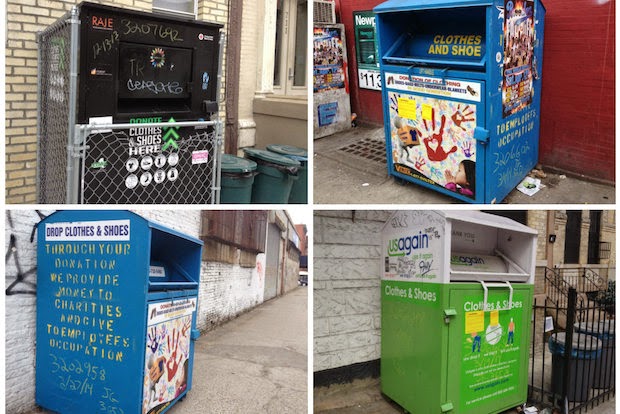 Metal bins for used clothing can be found on sidewalks across the city, but their placement is often illegal and they're being installed faster than the city can remove them.

For-profit companies that put out donation bins similar to those of charities including Goodwill and The Salvation Army have the Department of Sanitation removing dozens of collection points, with 57 hauled off in the past nine months, up from 30 removed in the city's previous fiscal year, running from July 2012 to June 2013.

Brooklyn had the most bins removed of any borough, with 33 pulled. Eleven were hauled away from the Bronx, 4 were taken from Queens and none were removed from Manhattan, according to the Sanitation Department.

The sale of used clothing and other textiles is a multimillion dollar business, with companies sending them internationally for resale or to companies that use them for insulation and furniture padding.

When residents complain about clothing bins on sidewalks or private property, Sanitation workers tag them with stickers warning their owners the containers will be hauled off if they're not moved within 30 days.

The companies SpinGreen, USAgain and Viltex place used clothing bins in the city and don't claim to be charities, but some nonprofits said donors are being duped.

You might want to try "The Lupus Foundation of America,Inc". They have a great informative website and will pick up (as scheduled by you on their website) a couple of times a month. I put clear bags of clothes or many household items on my front stoop at 7AM and they pick up the same day, usually in the morning. I don't have to lug anything to a phony charities box. Try them.

A few weeks ago, several of these things just suddenly showed up in and around my neighborhood. All of them were from the same company.

I immediately called 311 to have them removed since it was very obvious to me that these were illegal and shady (they blocked sidewalks and the company name on the side was some sort of "green recycling" front). The 311 person had no idea how to handle this - didn't know what department to file this under. I suggested sanitation since that seemed logical to me. However, the 311 person got hung all up on the whole does-the charity-have-a-permit issue despite my insistence that since these things were taking up half the width of the sidewalk and not a charity they couldn't possibly be legal. The 311 person said I had to contact the State Attorney General's office (only open during the week and only during regular business hours) and gave me that number. Since I was calling on a Saturday, that put the kibosh on my efforts.

But here's the good:

I wasn't able to call from work on that following Monday since I was extremely busy. However, someone must have gotten somebody with brains at 311 or somewhere else because "poof!" by that evening, all but one of these boxes were gone! The last one then disappeared a few days later. I don't know who called whom but it made my month to see those things go away that quickly.

I'm the first one to admit that this city has lots of problems caused by mismanaged/underfunded departments, ineffectual elected/appointed officials, corruption or just general ineptitude but sometimes things do work out. This is one example of that and I'm very happy about it. So, thank you to the people who did their job this time.

Here is an example of one of these bins illegally placed on an Auto Zone parking lot but since removed when I called their headquarters. See http://cleanupjamaicaqueens.files.wordpress.com/2014/03/garbage-3-2-14-027.jpg

The city needs an independent agency to just focus on quality of life issues and then see that such issues are taken care of immediately by whatever NYC agency deals with that issue. There is such a lack of any oversight in NYC and such a bullshit bureaucratic red tape, that is why these types of issues pop up over and over again. People and companies take advantage of this situation is NYC because they know they can get away with it.

I always tell myself, my children and my grandchildren. NEVER donate to any business/corporation/"charity"/politician or anything/one that you do not have firsthand contact with.

You are LITERALLY throwing your money in the garbage.

I just burn all my old clothes in my fire pit.

The money from these clothing bins goes to fund drug lords...Remove these bins from our city now!!!

Thanks for this report, which reminds us that these days, one really should research before donating.

1) Not all donation bins represent a charity. Some bins belong to for-profit companies that sell donated items for a profit. While some companies do admit their for-profit status in the fine-print on their bins, others try to make themselves look like a charity in order to get more donations.

To further confuse matters, some companies pay a charity for the use of its name. Called “rent-a-charity” by critics, the practice entails the company putting the charity’s name on its bins and paying the charity a fee per bin. But reports say the charity usually gets little compared to what the company earns.

Charities are also not created equal. Although some donation bins are owned by a registered charity or nonprofit, some organizations can be deceptive in their claims about how much of the proceeds actually go to a charitable cause and what goes to “overhead.”

A municipality’s primary concerns about donation bins usually involve public health and safety. Indeed, reports across the country say some of the boxes cause blight and public right-of-way issues. Another worry is over out-of-town nonprofit and for-profit clothes collectors causing donations to dwindle at local charities. And some officials complain that non-local companies are getting a free ride ― paying no local taxes or fees ― even while little or none of the proceeds from their collections benefit the local populace.

2) The Viltex company seems suspect. I mean, “Provide money to charities”? “Give to employees' occupation”? I hope their bins don’t also say “We give to the Human Fund ― money for people.” Seriously, though, the lack of solid information should be a big enough red flag to make one steer clear of Viltex.

As for the SpinGreen company, its donation of the coats is a nice thing to do, but folks should be aware that many of these companies’ customers are mostly in Africa and other tropical areas, where coats are generally not needed. Thus, these items would seem to be more useful for their PR value when given away locally.

3) For five years I’ve researched the USAgain company (bins with white top, green bottom), and I have concerns:

a) USAgain filed its Foreign LLC registration with Washington state in 2005, a shocking 6 YEARS after the company claims elsewhere to have begun operations there. What took them so long? Could it be that USAgain was trying to avoid paying that state’s taxes such as Business & Occupation as well as Labor & Industries?

b) USAgain is controversial for even more disturbing reasons. Reports going back a decade suggest that the for-profit company, to quote one TV news investigation, “... routinely pretended to be a charity so business owners wouldn't ask for rent on the bin space.”

The description box in the 2nd report has more info.

Thanks for the chance to share my opinions. Again, research before you donate.

Not only Catholic, but operated by the Congregation of the Mission - i.e., the Vincentians. But sometimes organizations forget their "mission". For example, it took about fifty years for St. John's to build that nice church on its campus, but it always had money for athletics.

You mean, they're NOT public trash cans where I can throw away my household garbage?

One of these collection bins showed up on my block last year. As per usual, garbage started appearing on the sides of the bin and men started using it as their own personal urinal. Earlier this year, after seeing a report about the illegality of these bins on NY1, I called 311 to request its removal. I was told that I had to submit a Collection Bin Request to the sanitation department. I printed out the form from http://www.nyc.gov/html/dsny/downloads/pdf/contact/requests/misc_request/DS69.pdf and posted it to DSNY as instructed. A couple of weeks later, I received an email from Brian Nolan of the DSNY stating that my request was received and that they would be investigating the issue. A week or so after receiving the email, a sticker appeared on the collection bin indicating that it would be removed soon. However, another week passed and someone removed the sticker and welded a chainlink fence on the sides of the bin, which is also welded to the sidewalk. I sent an email to Mr. Nolan on February 26th informing him of the development. Haven't received a response from him yet. I also called Kevin Bordes (who I was told to contact if the bin wasn't removed within 45 days of the receipt of my request) at 718-642-3084 a few times, but no one ever answers the phone and there's no voicemail. I guess I'll have the unfortunate pleasure of watching men urinating on my block all summer.