From faith to Fedders 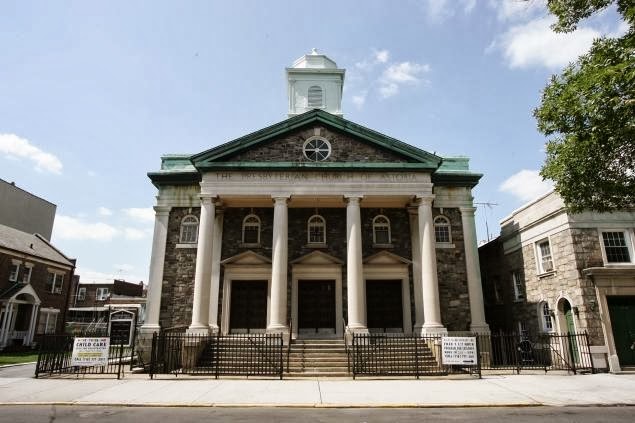 The six-story, $24 million project was built on the site of the former Presbyterian Church of Astoria, which had reached out to the nonprofit HANAC organization and Enterprise Community Partners after facing financial difficulties.

“HANAC-PCA Senior Residence is a critical example of how underutilized, faith-based sites can be used to create new housing in a city where land is scarce and the need for affordable housing is great,” said John Kaiteri, HANAC executive director and CEO.

The development was primarily funded through the city, state and Borough President Helen Marshall. 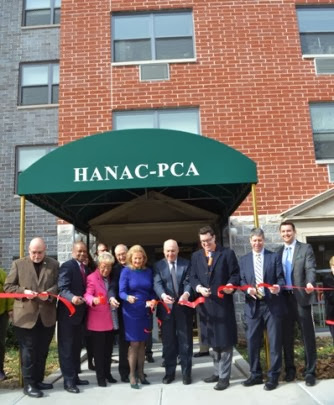 Totally in excusable and shows the utter powerlessness of the community.

Church members tried to save the building - had a plan to develop only part of the property - and presbytery showed up and told the clueless immigrant part of the congregation (that does not understand clearly Prebyetian polity) that they should go along with this. The vote was something like 14-13 in favor.

The community tried to get some ideas on adaptive reuse, but no politician showed up, the press focused on the blind minister's plight to garner sympathy (he has since retired to a fine pension after drawing full salary for a Sunday that had 25 people at a typical service), and the Sacred Sites Program showed up and said go ahead and develop - something thrown in the face of the community.

Community preservation in Queens is impossible.

Actor, Robert Di Niro, summed it up in the film "Analyze This"..."Fuckin' Greeks"!

I beg to differ with you, sir.
The community IS MOST POWERFUL.

Of course I mean the Community of developers.
The preservationists are sheep!

"Lambs are easily bound and slaughtered...never knowing the reason why...but whoever treasures freedom... like the Swallow has learned to fly".

An old Israeli folk song which Joan Baez made famous.

Greeks didn't attend that church. Their churches are very well attended and maintained. You might want to check some fucking facts before you open your mouth.

Last I checked no one put a gun to the ministers head. They willingly sold to HANAC because the congregation was tiny, and the buildings were decaying and not well maintained.

I am by no means suggesting the end result looks good at all, or is the best result for the community. At the very least they could have designed it to fit in with the other buildings on the block.

To HANAC's credit, one of their other buildings is the old 114pct on 30th ave, which looks exactly as it did on the outside as when the police used it.

And of course right at the helm, the Village Idiot, Helen Marshall. Who the hell voted for this woman three times, that is what I want to know.

Isn't that always the way in queens? work over the uneducated immigrants?

They incorporated the columns and doorframes into the new facade. It doesn't look good.

What a damn shame! Queens needs to re evaluate our identity as a borough as a whole. Knocking down buildings with character and dignity for bland towers and boxes of buildings is paving our future look. Which is not sumthing to be proud of. Nobody wants to live or visit places that have no character or charm. The could of repurposed that building g somehow but with lack of imagination, talent and education these people making these decisions are ruining Queens.

"Greeks didn't attend that church. Their churches are very well attended and maintained. You might want to check some fucking facts before you open your mouth."

Greeks didn't attend it. They just destroyed it for a tweeding program. Where's the guy that's always posting that churches should get torn down so the properties will go back on the tax rolls? If a non-profit buys it, there's still no tax revenue.


New York Times
Mayor's Ban On Contracts To an Agency Is Questioned
By JOE SEXTON
May 18, 1996

A Federal judge said yesterday that she had serious concerns about whether Mayor Rudolph W. Giuliani had abused his power by ordering that no city contracts be given to a Queens social service agency as long as it was a subject of a criminal investigation.

Earlier this spring, Mr. Giuliani canceled two welfare-monitoring contracts with the agency, the Hellenic American Neighborhood Action Committee, after it was disclosed that administration officials broke city bidding rules in awarding the $43 million contracts to the agency. The administration has subsequently canceled nearly a dozen other contracts with the agency, known as Hanac, and ordered all city agencies not to grant new contracts to it until a Federal investigation of the welfare contracts is completed.

But Hanac, noting that administration officials are also under investigation in the case, has gone to Federal court to reverse the Mayor's order and get some of the non-welfare contracts restored. Yesterday, Federal District Judge Sonia Sotomayor raised questions about whether the Mayor had inappropriately, or even unconstitutionally, injected himself into the contracting process.

"This one troubles me," Judge Sotomayor said, adding that the Mayor's ban might have violated Hanac's constitutional rights to due process and property. She said she would not rule before the end of the month.

Lawyers for Hanac accused the Mayor of having acted against the 25-year-old agency in order to limit the embarrassment to his administration from the contract problems. They contend in their lawsuit that the former Hanac official who negotiated the two contracts to monitor welfare recipients was a rogue administrator who had spun off his own corporation to run the programs.

That official, George Sarant, has been a longtime campaign contributor to Mr. Giuliani. Former administration officials describe Mr. Sarant as a friend both of Anthony V. Carbonetti, the Mayor's appointments director, and of Kathy Giuliani, an official with the administration's Community Assistance Unit in Queens who is married to the Mayor's cousin. Mr. Sarant, who was named by the Mayor to the city's Human Rights Commission last December, hired the relatives of several administration officials after Hanac was awarded the contracts last summer.

Lawyers for Hanac have asked Judge Sotomayor to allow them to question Giuliani administration officials under oath about their relationship with Mr. Sarant, and yesterday the lawyers indicated that they want to question Mr. Giuliani himself. The Federal Bureau of Investigation has spent the last several weeks exploring the question of whether senior administration officials played any role in giving the welfare contracts to Hanac.

"The Mayor has conducted a campaign of vilification against Hanac in order to divert attention from the administration's failings," said Allan M. Pepper, a lawyer for Hanac. "We want to know who made what decisions with respect to Hanac and why. It might be a rich line of inquiry. The Mayor may have had political reasons for terminating all of Hanac's contracts, but it may have been unlawful."

Lawyers for the city yesterday defended the Mayor's right to act in the best interest of the city, and they said the ban on new contracts could be lifted if Hanac was exonerated in the inquiry being conducted by the United States Attorney for the Southern District. They argued that the final decision on whether to grant city contracts rested with the Mayor, and that his decision to effectively bar Hanac was done in the interest of establishing a consistent administration-wide policy.

Wait...Why is the state funding it? What ever happened between separation between church and state?

HANAC isn't a church. It's a social service organization.

Every civic leader in Astoria went along with this travesty as well as what passes for its civics.

The real ire is the city preservation community that did jack shit to help.

But boy oh boy we all get spams from them telling us of their battles and asking for donations.

"Greeks didn't attend it. They just destroyed it for a tweeding program."

It must be nice to live in your extremely simple minded world. I guess you really hate old poor people too?

"All units are reserved for persons 62 years and over. Qualifications are based on the U.S. Department of Housing and Urban Development guidelines, with a maximum income of $29050 for a one person household and $33,200 for a two person household. "

Do I hate that a beautiful old set of buildings was destroyed? Yes.

It's it one ugly ass building? Yes.

The 'preservation community' doesn't have a magic wand and a trillion dollar bank account to save buildings like this. If you want to save properties like this one, you need to own them. Lord knows the LPC could give a damn about Queens.

I'm sorry, but using the excuse that it's housing old people in order to justify what happened here is not going to cut it. HANAC has destroyed historic buildings across Astoria. They could just buy empty lots and build there.

That's right. They could have restored the Epworth instead of doing a Tommy Huang in Whitestone.

Spleen it to me this: Hellenic?

HANAC, the Silver-Rapfogel group and Jesse Jackson's PUSH are all LBJ-era Welfare subcontractors. They work just like the Obamacare navigators. They keep immigrants from assimilating or even voting, but use the threat of these people voting to extort grants, from which they take a nice cut. Politicians essentially pay them to keep the immigrants down. An immigrant who doesn't become a citizen, register to vote, or learn English becomes their pawn, because the redistricting census counts them even though they don't vote. So it is cheaper to campaign in a district where most people don't vote.

Whoa!
Somebody's got a guilty conscience!
Methinks that some Greek here doth protest too much.

Tell me that Astoria ain't run by Greeks?

All those GREEK cafe owners on Broadway keep on cranking out the air conditioning through open doors on the sidewalk in the summer...burning up the power grid!

How much does a Euro-trash hipster have to pay these days for a cup of Greek coffee?

"Scatta no fas"!
Pardon my spelling.

My relatives are forever complaining, but I've rarely met a financially impoverished Greek?

The funny thing is, this site and the rest of our area used to be inside something called America, where people could do as they wished with property they owned, but they'd have to pay for it themselves.

Imagine such a place, where it wouldn't matter if you liked how a building looked because you didn't own it, but where you didn't have to pay to build it either.

I've heard it was a prosperous, important country at one time.

RE:"My relatives are forever complaining, but I've rarely met a financially impoverished Greek?" Call 1-800-829-0433 to report those misers who no doubt cheat the IRA the same way they trojen their eurotaxes via Cyprus banks to pay for soviet pipelines and soviet missles! They should get audited twice a year, starting with their catering hall church tax shelters!!!

Astoria is now only three per cent Graecian, but East Flushing is twelve and Whitestone is nine.