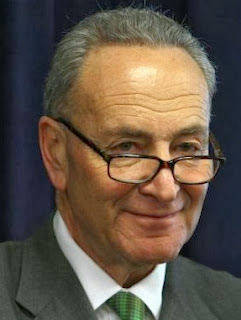 Schumer says he will introduce legislation that would levy a fine of $20,000 for each so-called robocall. Repeated violations would be considered felonies, punishable by up to 10 years in prison.

“The penalties are so low, they’re almost an invitation to break the law,” Schumer said.

As of August, the senator said, the Federal Trade Commission logged up to 200,000 robocall complaints a month compared to 65,000 in October 2010.

I'm sure political robocalls will be exempt.
Posted by Queens Crapper at 12:13 AM

This telemarketing BS is getting out of hand.
Problem is as in NY State as long as a Telemarketer contributes 5% of there income to charity they are exempt from the "do not call list"
The stupid 5% law need fixing as well !!
These crooks are always calling "on behalf of" usually using the words "Police" "Fire Dept" to get your attention !! Charity's in NYS can write up and pay themselves 95% of the $$ take as "administrative costs" and only send 5% to the cause.

Robocalls should be made illegal, period.

That's interesting re: charities. We get inundated nightly calls from non-profits - I tell them to put us down on their do not call list. There are so many calling us that I don't think it's effective. My thought is to not give mail donations to charities during the holiday anymore.

Hey Chuck, Will you include political robo calls too? You know, the ones that politicians use during election season?
Last month I received 5 in one day!!! Nonsense .

If it's Sunday, it's time for Charles Schumer to hold a press conference. He'd never do it on Saturday, because that's the Sabbath - but Sunday is a slow news day, and he likes to be in the paper every Monday. He's so transparent. When there's nothing "new" to talk about, he recycles old issues. Pretty soon he'll be having a Sunday press conference to announce that Generalísimo Francisco Franco is still dead.

"I'm sure political robocalls will be exempt."
They are the worst offenders, IMHO. They should NOT be exempt.

Scammers setup by accountants and lawyers who have built themselves new jobs --all of them.
They get to not only legally call at night but WORST: "Charity" in New York state can pocket 95% of the money as administrative costs.
These folks pay themselves over $500,000 a year, buy whole buildings and drive $100,000 "business cars" ---all tax free BTW! The boiler room call centers (usually in cheap states) that run the "bots" and calls are even deductible and in on the take.
Its 100% true
New York has the most corrupt charity laws in the nation. Not one of these politicians or news people ever talk about this. When When I worked at NBC I exposed this to the news people they told me "STF up" we are not going to verify and open a can of worms like that and have all the folks in Albany down our neck's"
GIVE THESE TELEPHONE CHARITY's NOTHING, stupid New Yorkers have already made them millionaires !!!! Now area codes (718)&(516) are the #1 targets --Keep your money local.

Quote: "I tell them to put us down on their do not call list"

For some reason both the Governor and all the Senators refused to do something about this 5% loophole. Result ? Now all callers are "non for profit" or have a 5% component of to go around the call law

How is it that a US Senator spends our time and money worrying about this crap? Just curious. Can you picture someone like Robert Kennedy or even Hillary on TV worried about this petty shit? I can't. But this seems to be what Chuckie spends his time on, right?

How do you report these annoyance calls when the phone numbers are blocked? Try figuring that one out, Schumer!!!!

Many of the calls are not only blocked but originate from some Skype or VOIP account overseas. The bots listen for a voice detection then rout to a local boiler room. "Hello Im calling on behalf of the NY State police"
Oh yeah really, and im the Pope !
Its total bullshit scamming and should be illegal !!

The most dangerous place in New York is between Chuck Schumer and a camera.

Quote:
"Hey Chuck, can I keep my insurance and doctor The heck with robo calls"

Hahaha yea right…Chuck go against Obama's pyramid exchange scam ? Only an immediate repeal of Obamacare ASAP would have a chance fixing that now. 100s of fed up doctors are already closing shop in the area, a quick view in Craigslist shows lots of examination tables, file cabinets and such.

Depending on Chuck to keep your insurence & doctor ? Hahahahahahahahaha, as in see an actual doctor if you get sick ? Hahahaha more like pick a number and prepare to die via some 3rd world PA, med student from Kenya waving bones or hospice with a morphine drip if your lucky !

I'm amazed people think Chuck would go against Obama and possible deny all them "urban Democrats" all there free stuff". Obama Chuck, Cuomo II --all socialist scumbags with law degrees who’s common mission is to destroy the GOP and, distribute the wealth and stay in power forever.
I am now convinced most New Yorkers are truly sheep. Democrats and Republicans are the same (Insert Whitestone and Bayside here) Forget laws, the Constitution isn't followed anymore, the Democratic electoral process is gone, the media and press have been propagandized, and rare gems who dare stand up to these thugs get shit on and killed in the media.
It will get much much worse before it gets better, NO WAIT it will never get any better ! Not in our lifetime

I use the term "sheeple" because that is what most liberals are.
Mindless ideological sheeple incapable of thinking for themselves forever incapable of connecting the dots.