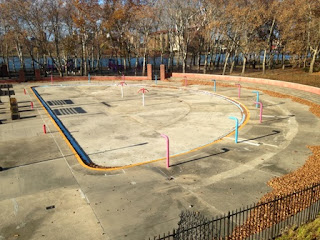 Astoria Park could soon be the next site to go skating for the holidays.

Councilmember Peter Vallone Jr. sent a letter to Parks Department Commissioner Veronica White on November 19, asking the agency to develop the Astoria Park Pool area into an ice skating rink. The area being proposed for the rink is next to the pool and used for sprinklers during the summer.

Vallone and White are both on their way out, so how is this even a "could soon" story?
Posted by Queens Crapper at 12:45 AM

Don "junior" Pete Vallone will never be out of things.

That political mafioso will be pulling the strings behind the scenes from somewhere.

As a lawyer, he's helped many of his developer clients skate around the issues very well.

LOL!
Can you imagine him and his brother Paulie, teaming up to do triple jumps together?

How much will this project cost? If a bocce court costs $650,000 imagine what an ice skating rink will go for.

I am looking forward to the $4 million salsa concert theater proposed for the diving pool.

The Shore Blvd and Randalls Island crowd will have a field day with the sheeple around the park that were too stupid or lazy to think every time a Vallone opened their mouth.

PS The view of the city will look nice being replaced by a wall of 40 story towers filled with dishwashers, cleaning ladies (which are ok) and their kids (which will not) ....

Just noticed the pond across the street from where I live has a coating of ice on it. Few more days like we've had the past week and they'll be skating there.
And it didn't cost a dime.

"Just noticed the pond across the street..."

And if you are talking about Bowne Park Pond don't let the cops catch you. According to them ice skating is illegal there.