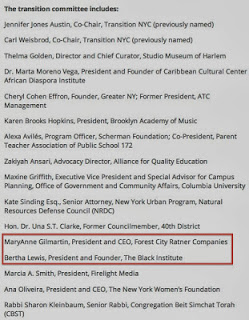 de Blasio has long had a relationship with Lewis--he owes her and the associated Working Families Party big-time for his entire political career. And it's understandable that he'd have a relationship with Gilmartin, given the importance he's placed in getting Atlantic Yards affordable housing done.

But her prominence confirms just how important that relationship is--one I suspect will pay off with carrots, not sticks, regarding Atlantic Yards.

Mayor-Elect Bill de Blasio today announced the appointment of 60 experienced leaders and experts to his transition committee that will assist him in building a progressive, competent and diverse city government.

“These leaders are volunteering their expertise in every issue and area of municipal affairs,” said Mayor-Elect de Blasio. “Together, they will join Transition NYC Co-Chairs Carl Weisbrod and Jennifer Jones Austin in helping me to assemble a team that’s devoted to building one great city where everyone shares in our prosperity.”

“My charge to the transition team is to identify women and men from every part of our city and walk of life that share a commitment to progressive and competent city government,” said de Blasio. “They will be advising me based on their wealth of experience and knowledge of specific issue areas and government agencies.”

the comrade mayor told you what he was politically. and his background in past government proved his ideolgy of progressive /marxism. now deal with it. AND PAY UP FOR HIS VOTERS IN THE UNIONS.

jfk was assassinated by a self avowed marxist,oswald,

I made a mistake . a man at the funeral resembled McCarthy.
father Joe K. financed McCarthy's campaign. jfk and rfk worked with and were friends with McCarthy.