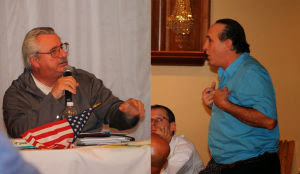 A longtime community board member from Queens can keep his unpaid position on the panel despite accusations of sending an anti-Semitic message to three Jewish board members this summer, the board voted Tuesday.

Sam Esposito, a retired NYPD officer from Ozone Park, volunteered to foot the bill for a pizza dinner for Community Board 9 members in June, plus cover the cost of several meals from Ben’s Kosher Deli in Bayside, he said.

But Jewish board members Wallace Bock, Jan Fenster and Evelyn Baron refused to eat the kosher fare because it came from a deli that is open on Saturday, the Jewish Sabbath. Esposito, who is not Jewish, said he then ordered more food from another deli that the board members deemed acceptable, but they still didn’t like it.

An incensed Esposito later fired off a nasty note to the trio, accusing them of acting like thankless brats.

Bock later filed a formal complaint and the board was asked to decide Esposito’s fate. He survived the no confidence vote, 34-10.

But the recipients of the missive charge that they never got their say. Bock, Fenster and Baron all stormed out of Tuesday’s meeting after the vote, with Bock vowing to resign.

Ok, now that this has been clarified, it's ridiculous that Sam's status was even subjected to a vote. No good deed goes unpunished, I suppose.
Posted by Queens Crapper at 12:46 AM

Fire the whole board except Sam and start over. Those ungrateful spoiled knumbskulls do not deserve a position on the Community Board.

They have made it clear they are there to serve their own interests instead of those of the community.

A bunch of wise asses here.

I've dealt with these groups of individuals,and quite honestly, it disgusts me how their noses are always turned up, as if the rest of society was designed to be inferior. They've got their heads shoved too far up their Torahs to be able to adequately serve on a community board! I agree with the first comment. Send them packing!!

WELL DUHHHHH! How many times have we covered their ass in the last 100 years and they can't even eat a goddamn pizza?

Americans have spilled blood, sweat and tears and spend a lot of our money to create Israel. Go there!

Yes, let's have a pogrom here in Queens. Awesome. Bet you're sorry you didn't think of it before November 9.

As a Jew and a community minded person I am mortified at the despicable behavior of the three members. I ask that all who are involved do not hold this against all Jewish people..