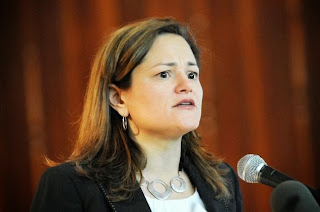 A leading candidate for City Council speaker may have violated city ethics rules by accepting unpaid assistance from a prominent lobbying firm working to further her candidacy.

And the lobbying firm, the Advance Group, may have violated the rules by providing the free advice to the councilwoman, Melissa Mark-Viverito (D-East Harlem).

The Advance Group, run by Scott Levenson, helped Mark-Viverito prep for debate forums, set up meetings with county Democratic leaders and network with the Council members whose votes she needs.

The Daily News first reported last week that the assistance was being provided at no cost.

As a public servant, Mark-Viverito is prohibited by the City Charter from accepting a “valuable gift” from a firm that intends to do business with the city.

And lobbyists, in turn, are prohibited from giving those gifts.

The NY Times also points out the Advance Group's excessive spending in the election for mayor:

Bill de Blasio and his Democratic supporters had warned for months this summer that Republican boogeymen — particularly David Koch — would take advantage of a Supreme Court decision and loosen mighty rivers of money and turn our mayoral election inside out. “Don’t let the Koch brothers buy the election,” he said.

David Koch retreated in November to his Park Avenue co-op after spending a relative pittance. But New York City saw a spasm of unregulated campaign money, most of it unleashed by wealthy Democrats and unions. And no one channeled those rivulets of cash more aggressively than Scott Levenson and the Advance Group, the strategic consulting firm he heads.

The United Federation of Teachers dropped millions of dollars and Mr. Levenson took at least a $370,000 cut. A group putatively devoted to carriage horses but focused intently on defeating the speaker of the City Council, Christine C. Quinn, spent a golden lode, and again Mr. Levenson took a cut.

Now the Campaign Finance Board is investigating the Advance Group’s role. Outside groups can spend themselves silly, but they cannot coordinate with individual candidates.
Posted by Queens Crapper at 12:14 AM

Now I know I didn't waste my vote on that "rent is too damn high" guy.

get ready for the fallout next year citizens

But New York City saw a spasm of unregulated campaign money, most of it unleashed by wealthy Democrats and unions.
.
.
The United Federation of Teachers dropped millions of dollars

Left wing and crooked? She's perfect for the job. May as well appoint her right now.

I really can not believe this clown is probably going to be the next speaker.

She has this expression on her face in the picture like, oh my god I just shit myself.

What's up with her pumpkin head and her eyes? were her mother and father, brother/sister?