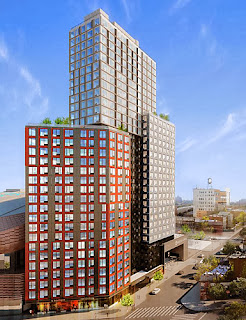 A band of politicians and civic groups is calling on the state to stop developer Forest City Ratner from selling off the majority of the Atlantic Yards development until the company fast-tracks the construction of below-market-rate housing.

The Shanghai-based developer Greenland inked a deal in October to buy the rights to the remaining, un-built towers of the stagnated project from Forest City Ratner, leaving just the Barclays Center and the under-construction modular high-rise B2 tower in the hands of the builder. But elected officials, including Fort Greene councilwoman and Public-Advocate-elect Letitia James, said the state should put the brakes on the deal and find someone new to jump-start the so-called “affordable” housing, because Brooklyn does not know Greenland the developer from the Nordic country it shares a name with.

“The governor should consider not-for-profit organizations to build the affordable housing, ones who have a track record of doing it,” James said at a Friday press conference. “Now here Forest City Ratner is, trying to kick out the plan and selling over 70 percent of his interest in this project to an organization that we really don’t have any relationship with and have no experience with.”

Greenland’s purchase includes a planned 15 apartment towers and one office building and a promise of 2,250 so-called “affordable” units, of which only 181 are in progress as part of the 383-unit B2. Officials are demanding that the state’s Empire State Development defer any sale until the state has looked at other ways to expedite construction.

To Letitia James' credit, she was one of the few electeds to speak out Atlantic Yards before construction started, and exactly for reasons such as this. The others aided and abetted Bruce Ratner, so the outrage doesn't exactly come across as sincere.
Posted by Queens Crapper at 12:20 AM

This is only one example of the social engineering that's been going on throughout NYC under the Bloomberg administration.

All that yummy Brooklyn real estate has got to be gentrified so that the developers, in their luxury digs, can make a living.

Like when Pierre Rinfret caught Maria Cuomo and many high level bureaucrats living in Mitchell Lama?