Why is corporate welfare ok for Willets Point? 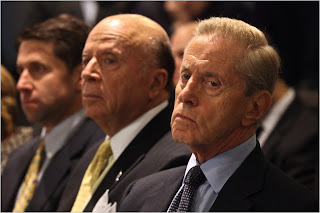 The proposed Willets Point economic development project is essentially government picking the winners and losers. Many of the developers continue to act like pigs, by feasting on taxpayer dollars. The borough of Queens and New York City prospered for centuries prior to the creation of various city and state development corporations over the past decades. In too many cases, projects have been heavily subsidized by taxpayers, commonly known as corporate welfare. Between direct government funding, low interest loans and long term tax exemptions — the bill to taxpayers may be greater than the benefits. Also there is a relationship between Pay for Play campaign contributions from developers to elected officials looking for favorable legislation, permits and subsidies.

Don’t forget the conflict of interest for senior staff from city or state regulatory and permitting agencies. Too many leave at the end of any mayoral or governor’s administration to become employees or consultants to the same developers they previously oversaw. Remember former Deputy Mayor Dan Doctoroff who went to work on some of the very same projects he previously represented at City Hall? Too many mega developers try to purchase the support of local community groups by making so-called voluntary donations. They also make promises for capital improvements, which after the major project is completed, don’t always appear.

If projects like Willets Point are so worthwhile, why can’t major developers use their own funds? Can’t they obtain loans from banks, like medium and small businesses, rather than pick the pockets of taxpayers to pay a significant portion of the bill? Can our water, sewage, power and transportation infrastructures handle the additional stress on the environment from such projects?

Because then it wouldn't be tweeding.
Posted by Queens Crapper at 12:48 AM

Queens is the capitol of corporate welfare!

Borough hall bailed out Tommy Huang for years by letting him get by with...NOW...even murder (Elmhurst wall collapse site).

Because our politicians say so and you say nothing.

Thank you for posting this. These developers are the biggest takers more than any imaginary welfare queen could ever be.

By the way, where are the self-righteous tax payers who normally complain when it's a poor welfare recipient getting tax payer assistance?

They don't complain when it's a greedy developer or a wealthy sports team getting that tax payer money to build a stadium. But the self-righteous tax payer will protest when the needy apply for welfare.

It's time to shut down the greedy developers in this city.

"If projects like Willets Point are so worthwhile, why can’t major developers use their own funds?"

Because this is not America anymore. It is the Soviet Union, all over again.

I'm tired of all of this armchair America bashing!

Uh, wake up fella.
There is no more Soviet Union anymore.

It's far better to be living in America (with it current ills) than to be paying off your mortgage on a house in...let's say...Syria.

You are just a disgruntled malcontent, Gramps.

It's time to move or move on.