Concerned about overdevelopment in Ridgewood 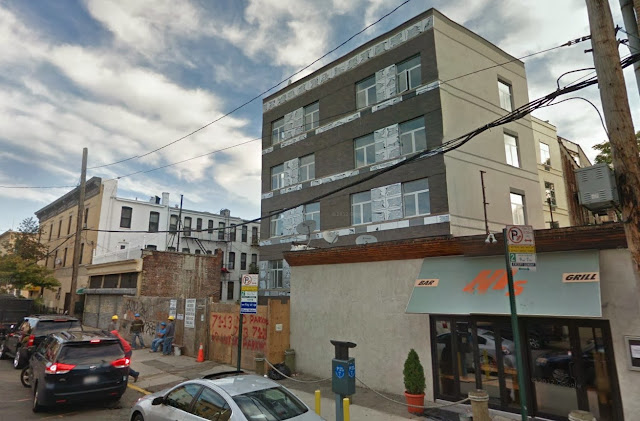 My name is Jack. I am a young South Carolina transplant who has been living in Greater Ridgewood for almost 2 years now. I have grown extremely fond of Ridgewood and what it contributes to Queens as a borough. I am disheartened lately by the rumors of Ridgewood's up-and-comming status. There is a condo I recently noticed on 60th Lane between 71 Ave and Myrtle. It is hideous and frightening. On Fresh Pond Road near Metropolitan there appears to be another condo going up. I was wondering if you knew of any grass-roots actions I could take to better fortify Greater Ridgewood. I would cry to see the lovely pre-war houses and buildings replaced by new construction buildings (like those seen around Myrtle-Wyckoff).

At any rate, I support your blog. Thank you."

Grass roots actions? Well, I suppose you could join a civic organization. But then again, that doesn't seem to help for a number of reasons.

So, Jack, my advice to you is to become an independent researcher. You can't beat them at their game unless you know their rules and how they cheat. See below for an example: 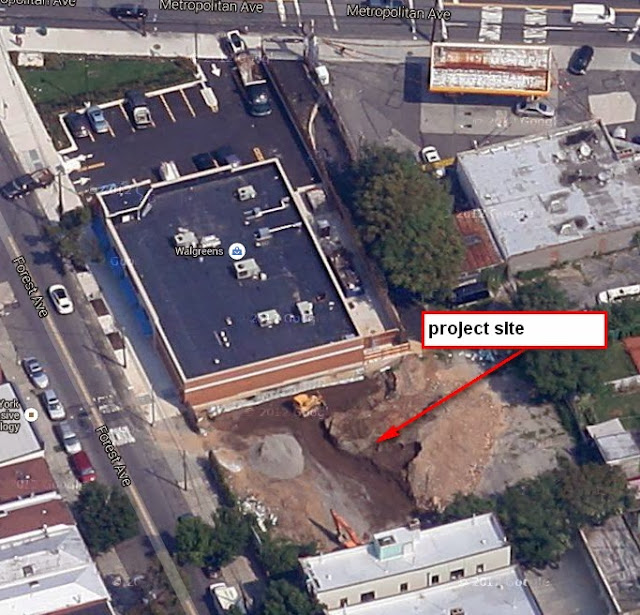 This e-mail was sent to Queens CB5 and BCC'd to yours truly:


"There is a proposed project on Forest Avenue which I believe requires a variance, but it looks as though the developer is trying to do an end run around CB5 and BSA.

The address is 62-41 Forest Avenue. Plans have been filed for a 5-story building containing 44 dwelling units, with retail stores and an “ambulatory diagnostic center” on the ground floor.

The zoning for this lot is split between R6B & R5B, and also has a C2-4 overlay. The permits have been disapproved by buildings dating back to 2011, when they only planned to have 30 apartments.

The reason why I believe this requires CB5 and BSA approval is because they are building in a mapped street. My friend, Paul Graziano, an urban planning consultant, explained to me that any project built in a mapped street must go before BSA. [See section titled: General City Law Waivers - ed.]

I could not find any reference to this street having been de-mapped in the past few years, and it appears on the most recent version of DCP’s zoning maps: 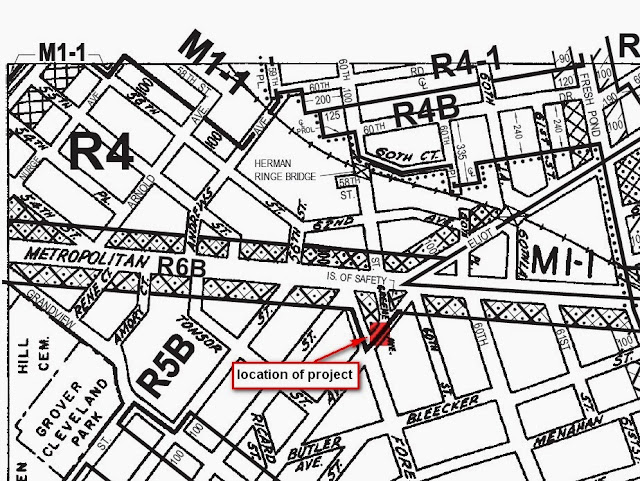 Ah, she forgot to mention that this is yet another Gerald Caliendo special...

All it takes is a computer and NYC.gov to find most of the information that you need. I also have plenty of resources at my disposal - architects, urban planners, historians and just people who know their stuff - if you need help. A camera also is useful. Send in your stuff. I'll be happy to post it and do some of the legwork.
Posted by Queens Crapper at 12:52 AM

Regarding That first picture with that building in it next to the store....That building looks so out of place sitting by those stores! This is what happens when the Asians move into a neighborhood!

Wonder if those are asians building those ugly things....they are famous for that sort of stuff!

This is not the work of Asians.

Grass roots actions? Well, I suppose you could join a civic organization. But then again, that doesn't seem to help for a number of reasons.

1. ice cream money - a politician gives you attention and you think you are a 'player' when the only thing being played is you.

2. you make a stand and the pols find some yo-yo that is a bit player in the system but the perfect foil against you as they make them the 'official' spokesperson for the community because they 'understand how to get along.' They get the media attention, generous funding and you get the nitwits that are a hindrance more than a help.

3. one block that is making the most noise gets a zoning change - they are happy taking pictures with the pol giving the impression that the community is happy and problem is solved - clueless that everything else around them is going to hell cause one block doesn't mean squat.

4. worst of all, those that know are not talking and those that don't get nowhere.

When we all learn to work together we will prevail. The chances of that happening is next to nil.

Resembles all the "Crap" being built in Flushing. Northern Blvd from Main St. east to Little Neck is starting to get more and more like downtown Flushing.

No, what he's specifically concerned about is, "the lovely pre-war houses and buildings replaced by new construction buildings (like those seen around Myrtle-Wyckoff)."

Just as the rest of us.

In the first photograph, the tall building is actually a relatively older building that was there for some time and then resurfaced/converted into its present incarnation.

The thing next door to it is also something that was there for sometime and remodeled. Both times it was a restaurant/bar/lounge thing.

Both are fairly ugly. My only point is that these pre-date the present building activity in Ridgewood by a few years - oh yeah, and they're not built by Asians.

The first building is a classic case of overdevelopment. It doesn't matter if the physical structure was something else. 55 luxury apartments where no one previously lived. And I already stated clearly that this was not the work of Asians.

Also if you click the link I provided you'll see that the original building was half as wide as the present structure. They built in a mapped alley to enlarge it.

Well why would the neighborhood want something the provides jobs when instead they can have hundreds more people?

Perhaps with new leadership the BSA will change - otherwise, experience shows that it really doesn't matter what the CB Land Use says - BSA rules for the developer.

Though I appreciate that someone new to Ridgewood is also concerned for it's overdevelopment, he's actually one of the reason's it has occurred. I've lived there all my life and the overdevelopment didn't begin until transplants began coming into the area.
I appreciate him being honest about his status as a transplant in the Greater Ridgewood Area, but the trend follows is parallel to gentrification. Which will then crew over everyone's rent, making it so that working class communities have even less places to live in NYC.
One of the best ways to combat it is to demand affordable housing units in all new buildings. Speaking to residents about concerns also helps, once everyone is somewhat on the same page, the entire community can try to move forward and make some sort of change regarding what can be done about the buildings and what it's doing to the area
-An NYC native and life long Ridgewood resident.

I am sick and tired of these Asians over developing Queens. It was so much nicer before these damn Asians came in. I was surfing the internet looking up info on Asians engaging in overdevelopment. I live not far from a construction site where Asians are putting up a huge building. To make matters worse they work on the weekends as well and no one gets any peace in the neighborhood. To make matters worse, there are illegal immigrants from Mexico working at the site.

You should see the monstrosity the Asians are putting up in Bayside on the site of the former Bayside YMCA on 35th Avenue. They even took half of the backyards of the neighboring homes after lying to the homeowners by saying they were over the property lines. No it is the Asian developers who are developing that site who are over the property lines. It's fraud! These people are destroying Queens. Hope President Trump sends them packing because most of them are here illegally.