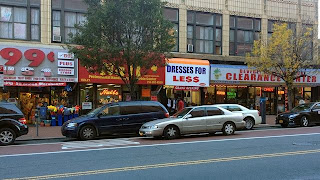 Jamaica has long been ripe for a revival. The most prominent retailers in the once-bustling southern Queens neighborhood are 99-cent stores, bargain beauty salons and dusty no-name apparel discounters.

National chains—from Starbucks to Victoria's Secret—have long shunned the one-square-mile area despite its status as one of the city's biggest transportation hubs—featuring the terminus of the AirTrain to JFK and a major transfer station for the Long Island Rail Road, not to mention four subway lines and a half-dozen bus lines.

The problem is that very few of those hundreds of thousands of people who pass through daily stick around. That gives retailers little incentive to open up shop—and in turn forces the area's 643,000 residents to take their shopping and dining elsewhere, typically to places on Long Island.

"We don't need more beauty supplies and nail salons and fast food," said Yvonne Reddick, district manager of Jamaica's Community Board 12. "We need quality stores that are going to draw people in to shop."

Surprisingly, that need may yet be met.

And then yada, yada, yada, Jamaica is the next big thing, just as they have been saying for the past 20 years. Wake me up when there's something worth visiting there.
Posted by Queens Crapper at 12:13 AM

I have not really heard before about a "Jamaica renaissance", but there is no doubt that Jamaica has much potential, unfortunately is has been wasted for decades and allowed to become the wild wild west. But I do think it can happen, "not any day now", but in about 3-5 years it will be different than it is now. Lots of work though and good leadership is needed.

The area around the LIRR and along Sutphin and Jamaica avenue is one big dirty, smelly, and dangerous cesspool. Even as a kid back in the 70s, when mom took us by bus to shop at Gertz, the area was run down and dangerous. Dad would tell mom to be careful when going there. Fast forward 40 years, and the area is even worse and I would never go near it.
It's the neighborhood in general that is bad.

Thank you but I don't need a PR expert to pull my schwantz. I can do it myself.

Jamaica has been expecting a renaissance since the early 1980s.

Unless those "troublesome" minorities are displaced, Jamaica will always eat up money and continue to go nowhere.

Outside of "The Estates" Jamaica is a toilet!
Tell someone you live in jamaica and it's worse than saying that you live in Flushing.

While I will agree that the area along Sutphin/Jamaica is not too clean (but not horrible), it is far from dangerous. I have been in that area late at night several times and there has never been a problem. It is patrolled well by the police, the station is well lit. Yeah maybe if you go way back into side streets, but that area near the station is not dangerous.

Why must people exaggerate so much. I live in Jamaica and so I think I know what I am talking about. Granted Jamaica needs much improvement, but I feel much safer here than in parts of Brooklyn.

Animals live there. Real businesses will always stay away.

This is a cesspool. Found myself out in that area last year when about 200 high school animals started to riot in and outside the wendy's. The cops swarmed in like this was a regular occurance.

It's a commuter hub for people going to work. Not a destination to shop and dine. They do those things on Long Island or Manhattan.
And half those using the Air Train are not tourists. The tourists have to get to the airport and catch their flights, not stay around Jamaica and get mugged.
Look who is getting on and off the buses and subways there especially the shuttle buses bringing the rich and elite to " Resorts Casino " in that other dump of a neighborhood, Ozone Park.

I would live in Jamaica! The real reason why I no longer shop there is because the men around there are shady...and the women around there stare at you if you are a white girl in Jamaica. What Jamaica does need is a QUALITY supermarket...that foodtown on hillside is disgusting! The home depot over there was an improvment but they need a good supermarket! Some place where it is not dirty!

I went into a dollar store on hillside ave and 169th street and I had seen some socks for sale and they looked like someone walked 10 miles in them and then decided to sell them!! It was gross!

Despite all of this, I would still live in Jamaica but I will not shop there!

The other side of Hillside Avenue was better until it was invaded by third world scam artists from India, Pakistan, Bengla Desh, Guyana and Trinidad.

After attending a few semesters at York College,where a low IQ guarantees one a job,I began to loathe Jamaica because of the rude and hostile Africans and larcenous blacks at the end of the E line. Those van drivers are really creepy and keep stinking up the air with crappy incense. I suppose to cover up the scent of the pot they're selling. The little gang bangers that would take over Jamaica Avenue when school let out making shopping dangerous. Does one really want to be walking in the middle of a phalanx of cops on one side and the gang bangers on the other? I don't want to be caught in their crossfire.

The overall feeling of despair in the no name discount stores full of Chinese plastic junk with the non English speaking employees. am so glad that they are employed.

Jamaica is a no go zone. The only nice thing about it is the cemetery across from the train station. The park across from the Family Court has been made into a dump and of course, a soccer field for illegal immigrant invaders from South America.

I certainly have my issues with Jamaica, since I live there, but some of the things that folks are saying like the violence/crime in the downtown area does not exists. In fact the only place that is iffy is in the South Jamaica section behind York College and most people do not even go there.

But I agree the retail pretty much sucks and some of the people are rude, especially the third world immigrants, but that is a given.

Time will tell if some of these folks will be around when things begin to change and they will. I have noticed as have others, that there are more white people who have moved in the area in the last couple of years.

C'mon Joe, it's well patrolled only because the courts are located there.
Law enforcement always seeks to protect its own turf.

I wouldn't walk south of Jamaica Avenue, at night, without my homies accompanying me and toting an Uzzi!

No matter how anyone spins the story, Jamaica IS NOT one of the desirable areas to live in Queens..outside of Jamaica Estates.

Not so bad can be very bad...and that's NO exaggeration!

C'mon Joe, it's well patrolled only because the courts are located there.
Law enforcement always seeks to protect its own turf.

What does that have to do with anything, the courts are not near the Sutphin train station and they are not even open at night, so I do not even know what you are talking about. As usual, more exaggeration from people who do not even live in the area. The same kind of people who think NYC is going to revert back to the 70's because of de Blasio. Get real folks, you sound like Fox News, all factoids.

Keep on believing in Santa Claus and the tooth fairy, Joe. You have my sympathies for your nabe.

I WOULDN'T MOVE BACK TO JAMAICA FOR ANYTHING!

I'm glad I sold my home 10 years ago, while I could still get a good price for it.

Had I lived in Jamaica Estates I might not have moved away.

I have no fear
that NYC will ever revert back to the 70s.

There's no argument regarding that, but Jamaica surely seems stuck there. Wasn't garbage and crime one of the a hallmarks of the 1970s?

Sorry, but it sounds to me like you're stuck in a time warp.

BTW,
what are the crime stats for Jamaica?

Factoids? Who needs the preparation "H"?
Not us...maybe you?

The Bronx will see a renaissance before Jamaica ever does.

Like its sister nabe Flushing...Jamaica has been flushed down the toilet.

At least Flushing is appropriately named.