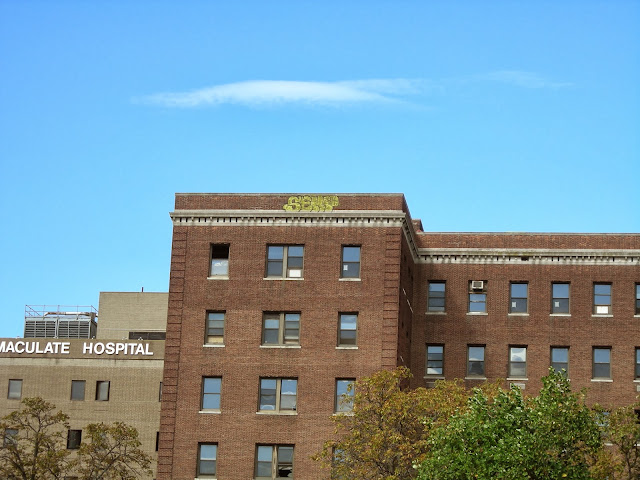 I wanted to bring to your attention the increasing deterioration of the former Mary Immaculate Hospital, since it was sold back in 2009.

I pass this area with some frequency, and was appalled at what I saw the last time: a huge graffiti tag at the roof line front facade, and numerous broken or wide-open windows.

Whatever 'sealing' the building underwent at closure has failed: it appears that people can now gain access easily. That means increasing vandalism, destruction, and a potential for catastrophic fire.

Nothing has been 'developed' since closure. I have no idea who owns the property now, who I can alert to the potential dangers I observed.

Any commentary or suggestions would be appreciated.

Well, Ben, it seems as though the owner of this property made some changes to his plan and was reissued permits this past Tuesday. So, hopefully, the building will be renovated soon. The building is in an R6 zone, so a lot of apartments can be put there.
Posted by Queens Crapper at 12:00 AM

I think if we all wrote to our favorite local elected and said that this was a blight to the boro (property values and all that) and mentioned the letter would be made public if they did nothing ...

... would get good results soon.

I already did, but I will not hold my breath on that one, although Greater Jamaica Development Corporation told me they would contact the owner.

Graffiti means that drug dealers and drug users have commandeered an empty building for their sales and use.

You should expect prostitution, crime, assaults and extreme vandalism when the graffiti gang bangers get access.

Once a building is left with out a security presence, no cameras and unlocked doors/ windows a property owner is setting up the property to be destroyed.

I have to ask myself, is it being done on purpose?

A trick employed by the Richmond Hills Guyanese & Trinidadian slumlords is to turn on all the faucets in the premises, leaving them on for hours or days to cause floors to fall in and other damage. Then they can claim water damage, scam insurance money and get permits to make changes that otherwise would be more complicated and expensive to obtain.

It's tragic that a hospital was forced to close. Let's thank all the illegal immigrants for this who gave birth to their multiple jackpot babies, used the emergency room as their private doctor, exploited social workers and didn't pay a cent for excellent health care.

I am very angry at this and other hospitals that were put on the chopping block. This is one taxpayer who doesn't cry for illegal immigrants.

Are you sure it's just graffiti, it could be art

So sad to see & read about this. My mom worked as an RN in this hospital for 20+ yrs & to see it not only close, but its deterioration, makes it hurts so much more.