To tear it down or fix it up? 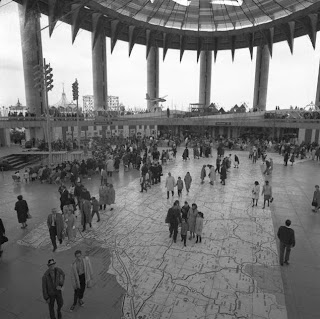 The city needs $52 million to save the New York State Pavilion and restore the deteriorating iconic ruin of the 1964-65 World’s Fair to its original glory, officials revealed Monday night.

But tearing it down would cost just $14 million.

Parks Department officials told outgoing Queens Borough President Helen Marshall, elected officials and community board leaders that they have not decided what to do with the structure, which includes the Tent of Tomorrow and three observation towers that have been shuttered for decades.

“They are in need of repair but they are not immediately falling down,” said Queens Parks Commissioner Dorothy Lewandowski. “So we have time to have some really reasonable dialogue.”

Lewandowski said the city’s new report on the site includes several engineering studies and ambitious conceptual plan that could cost at least $72 million.

Other options include shoring up the site so it could remain as a ruin similar to the 19th century smallpox hospital on Roosevelt Island for a cost of $43 million.

If we can pay $100M for Donald Trump's golf course, why can't we pay to restore the Pavilion? Or better yet, why not use the funds from Julissa's new Flushing Meadows conservancy to repair it?
Posted by Queens Crapper at 12:26 AM

Come on really...this should be an automatic yes to restore it. No thinking required how much more history and unique architecture can we afford to lose!!!

Why would this even be a question if you were born in Queens than you would know how important this is to our borough. Stops spending money on "luxurious condos" and preserve our history and landmarks!

Digging and confiscating the Million's of $$$ Cooper, family and friends stole would be a real start!
BTW it will cost 80 Million+ to restore in 2002 dollars. 1/2 mil to stabilize properly . These people are so fulla shit they should be shamed of themselves including the media !!
_Joe

In this borough historic structures allowed to rot until the case can be made for tearing them down.

I.e.
"It's become an unstable eyesore".

With Borough President Melinda Katz, an accomplished developers' whore, things will only get worse.

The numbers these politicians spout off are completely ridiculous. Would be nice if we still had journalists who would fact check this bullshit by calling up a few demolition companies and contractors to get actual estimates.

I'm as nostalgic as anyone for the 64/65 World's Fair, but this is just not worth fixing up. Tear it down, lay down sod, and call it peace.

The cost of demolition or restoration, I presume, is not only for the oval Tent of Tomorrow of The Empire State but the three observation towers as well, which are not in the photo.

14M still sounds like a ridiculous price tag for demo even including the towers.

They spent nearly half a million on two gates for willow lake trail further south... probably should have cost 10-20k tops. Embezzlement is the only reason we even have parks in these politician's minds...

Spend $52M and do what with it? Is there some new idea for its future use that has just come up, that did not exist for the past 49years? Do tell.

Ever see Planet of the Apes?

My dad worked this job with Port Morris in '63. They did the terrazzo map layout of the state.
People..some things need to be accepted to be left to ruin. This is one of those things. Clean it up...ok, if it's monetarily reasonable. Stabilize it and let it age gracefully.

The numbers these politicians spout off are completely ridiculous. Would be nice if we still had journalists who would fact check this bullshit by calling up a few demolition companies and contractors to get actual estimates.

There is only one in Queens nowadays and that is " THE CRAPPER". Everyone else just takes a press release and passes it off as journalism, or is afraid to question anyone of these criminals.

Ah, just turn it over to Donald Trump and let him restore it and put his name on it: The Donald J. Trump New York State Pavilion.

Use it as a paint ball field.

build a soccer stadium near it and i bet it'll get restored.

Sorry to see that so few want to preserve an iconic Queens structure. Sadly, because it is a Queens structure, the steps will be:
1) build it
2) neglect it
3) neglect it some more
4) let it rot and become dangerous
5) have politicians pose for pictures in front of it. There are 2 types-"We will protect you from this crumbling danger" or "What a shame that we could not save it, but the business case can't be made". Pick your choice
6) Wrecker's ball and bulldozers
7) Empty field with trash

Does anyone remember
that famous Florida tourism slogan (I think it was from the 1970s) which peppered our CRT TV screens?
"Come on down"?

Let me offer one for us--
if we insist on destroying everything of visual interest here.

"Come on out to Queens--
NYC's most boring borough"!

Jerry. I'd rather the motto be "Stay where you are". I like the fact that nothing is happening in Queens. Nice and quiet from the Manhattan Madness. Believe it or not, there are areas in Queens where you would think you were in the country. In the warmer months, birds chirp me awake where I live.

"If we can pay $100M for Donald Trump's golf course, why can't we pay to restore the Pavilion"

Thats because no tenant (like Trump) wants to be told how to run there business, who and how many they must hire.
Trump himself said "F_ this, I'm not going to have the city hacks tell me how to run my buisness"
That property or "house" if restored would still be mobbed up with unions like it was in 1964. The main reason the Worlds Fair never made $$ in the first place.

Who's gonna pay--$400 to tip a 50 gallon garbage or $250+ an hour to operate a 4 button amusement elevator, broom or "lightbulb maintenance" --or face imminent sabotage ?
Nobody wants to put up with that bullshit and "paying out" hemorrhaging money. As one of the engineers told (looks up at the observation decks) Quote: "Who the hell wants to go up there to view this Queens these days" "Take a walk down to the Unisphere, people using it as a toilet"

It is sad that New York has neglected its World's Fair past. The people of Seattle have taken beautiful care of their relics from the 1962 World's Fair (The Space Needle). To this day, it is both a symbol and tourist attraction for Seattle.
Considering that there is much growth coming to the area, shopping center at Willet's Point, Soccer Stadium proposed for Flushing Meadow Park, the yearly massive tourist trade from the US Open-it only seems logical to reconstruct the pavilion seeing that the neighborhood of Flushing is the second fastest growing city after Manhattan.