DeBlasio plans to overdevelop the hell out of everywhere 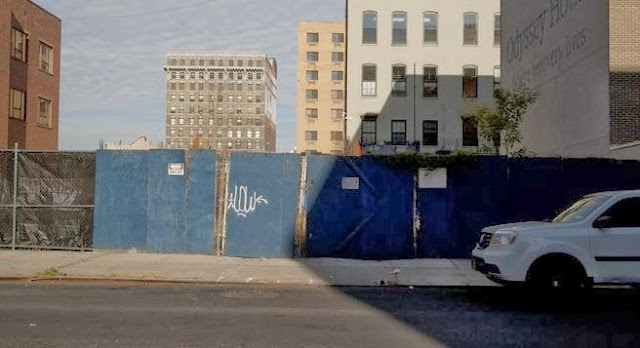 Call it Exhibit A. On part of an irregularly shaped block in the Highbridge section of the Bronx, a chain-link fence wraps around a three-acre property that has sat vacant for decades. Trees and weeds have run riot, in the process encroaching upon the sidewalks along University Avenue, even as the property's assessed value in the past decade has quietly soared from $716,000 to $9 million, according to city records.

And yet, because most of the property is zoned for residential use, and is assessed in the same low-density class as single-family homes, the Olnick Organization, which owns the land, pays less than $8,000 annually in property taxes on that residential portion.

Cases like that spurred Public Advocate Bill de Blasio in April to push for tax hikes on vacant land to force owners either to put it to use and build housing or to sell it to those who will. As mayor-elect, Mr. de Blasio is pledging to carry out his idea, which today would affect more than 10,500 lots in the five boroughs, with the largest concentration on Staten Island. The plan, after a five-year phase-in period, would hike yearly rates by an average of $15,300, according to estimates by the Independent Budget Office.

As for the long-vacant Highbridge lot, the city property taxes on the large residential portion would balloon to about $180,000.

By increasing the cost of inactivity to prohibitive levels, the hope is that more land can be put back into use and much-needed housing can be built. Many observers think it can work if the costs of holding land idle are driven high enough.

The measure could also produce another undesirable effect.

"Maybe a guy says, 'I'm not going to pay these taxes, I'm going to build a taxpayer,'" said Eric Anton, a managing partner at investment bank Brookfield Financial, referring to a small development on a piece of property that generates just enough money to cover payments to the government.

Mr. de Blasio's plan targets not active developers, but what the mayor-elect brands as "speculators"—owners who sit on buildable land waiting for prices to rise. In the past, Mr. de Blasio has singled out booming neighborhoods like Brooklyn's Williamsburg as prime locations for people warehousing real estate—all while the city suffers a critical housing shortage.

Enter Exhibit B. In the middle of Williamsburg, where land prices have doubled and redoubled in the past 20 years, Frank Fristachi and Suzannah Matalon have clung to an 8,900-square-foot parcel of fenced-off land at the corner of South First Street and Driggs Avenue. The owners insist they do not fit into Mr. de Blasio's mold.

"It's not vacant—it contains a beautiful garden, trees, bushes and plants, and was rescued from being a dump owned by the city," Mr. Fristachi said. "I think I should get a tax rebate for supplying this neighborhood with clean air and light."

Mr. Fristachi also disputes the suggestion that he's a speculator, pointing out that if he were one, he'd have already unloaded the parcel and banked his fat profits. Nonetheless, he conceded that Mr. de Blasio's proposal has made him unsure about what he should do if his property taxes rise from about $6,800 annually to an estimated $17,000 under the mayor-elect's plan.

This will build nothing but luxury condos and the same crap we've been seeing all over Queens for decades, but at a faster pace. Notice that there's no mention of infrastructure improvements.
Posted by Queens Crapper at 2:00 AM

Please offer an alternative idea or ideas that would achieve what you believe to be a good outcome.

And what exactly do you believe would be a good outcome?

Let's hear some suggestions instead of just the usual bitching.

Thanks, but the conversation will flow as we see fit, not as you dictate.

Lift all rent regulations. They were meant to help returning GIs, not to allow people to pay $200/mo their entire lives. Rent is subject to supply and demand pricing just like everything else.

It's ALL part of the "urban renewal minority people of color removal" credo that EVERY mayor adheres to in NYC....BAR NONE!

Would we have done any better with a Mayor Quinn? So Duke Di Blasio now replaces Emperor Bloomberg.

It doesn't matter who we elect. We get the same can of crap with a different label.

This is REAL ESTATE INDUSTRY NYC. That's who owns it and runs it.

You young generation had better be earning at least a quarter of a million dollars a year or forget about living in NYC!

There will be NO AFFORDABLE places to live here within the next decade.

It would be great if people actually lived in those overpriced co-ops and condos.

Manhattan has turned into a city of expensive, vacant apartments owned by foreigners or out-of-towners who rarely visit.

I know of buildings that are virtually empty in the city. There's no community once you don't have neighbors with a vested interest in the area. But I guess as long as the maintenance gets paid nobody cares.

Anyone know is Di Blasio targeting all vacant land and would that include huge tax hikes for owners of vacant land in manufacturing districts such as M-1,M-2 or M-3

I know of buildings that are virtually empty in the city.

The plural of anecdote is not data.

All these 'philosopher kings' with their imaginary schemes for incentivizing 'desired behaviors'.

I am soooo sick of statists it is not funny.


This is no longer America land of the free.

You dont own ANYTHING if they can tax you to comply with their schemes.

the most important part of this piece. "Notice that there's no mention of infrastructure improvements." We can't keep building without more power, more sewers, schools, etc

We don't have farms in NYC anymore not because the land was too valuable to use it as such, but because the City overtaxed farmers to force them to sell to developers. Now we're into the local food movement and there's not enough "local" to farm. Lame.

"Thanks, but the conversation will flow as we see fit, not as you dictate."

It's your blog, crappy. You can prevent any comment you choose from being displayed. How could a commenter possibly dictate?

Was just asking for ideas. Something besides sniping. That's all...

BIG TROUBLE COMING !!!
People that know deBlasio including friends of his wife say he's going after ALL UNUSED SPACE including private basements.
Depending on how big your family is VS your SQ footage and floor numbers a HUGE rental tax to keep your own basement is coming. Its pay up or rent it. Dont worry deBlasio will get you permits, utility meters and your new tenants. (in the latter you will get a sec 8 check every month)

First he'd have to either change the zoning code or rezone the neighborhoods that were just rezoned in the last few years. Either way, that takes a long, long time. I don't think this is his plan.

Zoning laws?
deBlasio will find a way to go around zoning.
He and the liberal judges, pols and sheeple voters to find a way !! It will likely be in some form of some of "humanitarian bullshit"

Under the guise of 'affordable housing' we will have to face an unholy alliance of developers and the poor.

Then we can have the Tale of One City.

Taxes are not calculated based on potential use. Tax is based on actual use as of the taxable status date. Only in condemnation proceedings does potential use enter the equation... if you find that not to be the case, you should be filing a tax certiorari challenge.