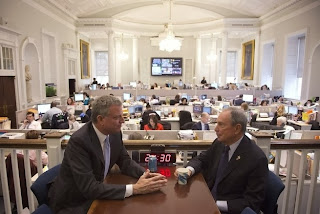 One of Mike Bloomberg’s signal accomplishments in New York City was reversing the flow of corruption. In the old days, and in every other city in the world most days, favor-seekers bribe politicians — with cash in envelopes, with legal contributions, or with political support. In Mike Bloomberg’s New York, the mayor bribed you, buying the silence or cooperation of individuals, cultural organizations, and social service groups with hundreds in millions of dollars spent on small personal favors — a legal payment here, a medical procedure there — and charitable contributions.

As a liberal Democrat, Bill de Blasio’s biggest challenge when he takes power in January will not be keeping crime down or funding an ambitious expansion of early education. It will be dealing with the explosion of Bloomberg’s machine after the grease of money is gone and the gears start sticking.

Bloomberg’s wealth, and his generosity, “was protection money. In many ways it inoculated him from potential criticism and stimulated people to do things that they might not have or shouldn’t have done,” says Doug Muzzio, a professor of public affairs at New York’s Baruch College. “Now the pie is smaller and the needs are larger, in the end there’s going to be enhanced conflict. And it’s going to take place in the halls of City Hall. It’s going to be the old days.”

Bloomberg’s close aides have always acknowledged that his wealth was, as much as his electoral mandate, a central source of power. But many observers confuse this civic grease for the straightforward millions he’s spent getting himself elected. The other money has been, for several reasons, hard at times to characterize, a secret lubricant of urban consensus.

That’s in part because the participants in the machine — the mayor, and the recipients of his largesse — have a shared interest in not talking about it.
Posted by Queens Crapper at 12:32 AM

He wasted hundreds of millions of dollars on private contractors and consultants -that was City money, not his own.

His own money was used to cover the resulting scandals and f-ups.

There was noting golden about the past twelve years.

Although one musr be intelligent enough to realize that the gravy train has pretty much pulled out of the station for the final ride,and sbe's not a comi' back.The fealty of those whose silence was bought in this manner is rarely perpetual,and folks talkin',the way folks will can unearth some pretty.interesting and potentially damaging details of what all went down in those hLcyon days of yore.

What's the difference in the end?
In the past a group of corrupt individual lawmakers and their minions ran NYC like a pirate ship. Later, Bloomberg accomplished the same as one man with his own wealth.

As long as we're offered nothing but crap to vote for, it doesn't make any difference which can of crap we choose.

What about Der Bloomberg's expensive follies that wasted millions of dollars that could have better been spent elswhere?

i.e.
Those absurd bike lanes. They'll be gone in a couple of years AT TAXPAYERS' EXPENSE!

The removal of Bloomberg will be a big step forward for New York - an opportunity to return to our roots from the scandalous behavior of the social, cultural, political, business, and media elites during the past 12 years.

I am looking forward to the next 4 years under the new mayor - no, I don't believe he is a real liberal, and no, I don't believe that his social agenda is particularly good, but it should be a breath of welcome fresh air from the oily stultifying embarrassment this city and its leadership has fallen into.

A lot of this will depend on you people, doing something to change things besides bitching in your jammies on this blog....

Making Bloomberg sound like a hero just isn't viable. He used his money to steamroll rezoning plans and enable his wealthy pals to make even more money on the backs of the working class slaves. Good riddance.

I hate both deblasio and bloomdick! I didn't vote for deblasio at all!!

Were there any articles during all of Bloomberg's term in office that spelled this out - that he was using his own money to bribe potential critics into silence?

Cause I feel like this is the first I've seen of it.

On one hand, I'm grateful for the article, and on the other hand am disgusted such things were not making the front pages many years ago.

I actually did gain knowledge of Giuliani's whoring around when he was Mayor and by extension knew the local media was covering his ass for years. Now it seems clear they have been covering for Bloomie too. Of course, being a Democrat I am sure de Blassio will get the David Dinkens treatment and can expect city hall reporters to be all over him like white on rice if it's found there is a dust bunny under his bed.

It's Dinkins, not "Dinkens".
As a New Yorker you should, at least, know how to properly spell your mayors' names.