Recycling not all it's cracked up to be 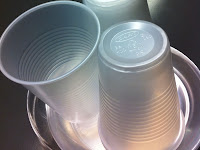 Mayor Michael Bloomberg told New Yorkers seven months ago, "If it's a rigid plastic—any rigid plastic—recycle it." But not all of the rigid plastic city residents have been bagging with their metal cans, beer bottles and juice boxes since that announcement is being recycled.

Nearly all of the rigid No. 6 plastic—commonly used in cups, plates and other objects—delivered by the city's trucks to its recycling vendor, Sims Metal Management, has been shipped to dumps because Sims can't sell it.

Last April 22 was Mr. Bloomberg's 12th and final Earth Day as mayor, and he doubtless wanted to announce something significant about recycling that week. But the expansion of recycling program to include all rigid plastic was ahead of its time—at least by a few months.

In December, Sims will open a Brooklyn facility that uses optical-sorting technology to automatically separate different kinds of plastic.

"With this plant open, I'm going to be able to start producing straight, segregated loads of [No. 6] polystyrene products and I'm told there will be some people who will buy it," Mr. Outerbridge said.

He acknowledged that it would have been better for Sims and the city to wait until the sorting technology was ready before expanding curbside collection of plastic.

The cost of sending waste to landfills is currently about $85 a ton. That number is expected to rise in the years to come, as landfill space becomes more scarce and transportation costs increase. If Sims continues to struggle to sell No. 6 plastic, it could ask the city to take action, such as encourage the use of PET, a more marketable type of plastic.

"I'm not 100% confident that we are going to have a reliable market" for rigid No. 6, Mr. Outerbridge said." If it comes to that, he said, "I would go to the City Council and say, 'Hey, we tried, and I don't like to be the person to say get rid of this material, but no one will buy this material on an ongoing basis, [so] we would like the city to advance some legislation to transition from [rigid] polystyrene to PET.' "

It's not about recycling and "Saving the Planet" That's bullshit. It's about generating revenue from fines...

I think they should get rid of can and bottle machines at the super markets.....im so sick of people going through my recycling garbage and leaving a mess!