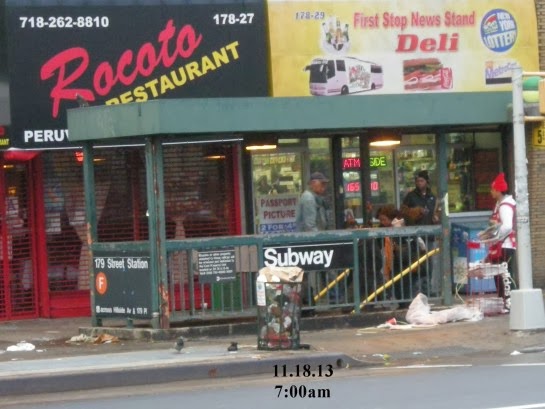 From Clean Up Jamaica Queens:

While dining at the wonderful Rocoto Restaurant at 178-27 Hillside Avenue yesterday, the owners Jesus and Jennie, told me that that Department of Buildings is going to fine them $5000 because their outside sign is bigger than 18 inches. Before they put their sign up, they had to get a permit and like all good quality citizens they did just that, as opposed to so many other questionable businesses in Jamaica. Then when the Department of Buildings came to do an inspection recently, they told Jesus and Jennie that the outdoor sign was over 18 inches and that they would have to spend thousands of dollars to change it or be fined $5000. Jennie told the inspector that if the sign was that small, no one would be able to see it since the subway entrance in front of their business would block it, but it did not matter, unless the sign changes they will be hit with a $5000 fine. Please tell what quality-of-life issue is being broken here?

Last night, Wed November 20th, Greg Mocker from WPIX did a story on this ridiculous bullshit by the city. It seems that several businesses in several businesses in that block are going to get hit with huge $5000 fines if they do not change their signs. One of the bullshit violations is that the lettering cannot be more than 15 inches, you cannot have a phone number on it, the size is too big and some other bullshit, none which affect the quality of life in Jamaica at all.

Yet the subway stairs right near the restaurant (which by the way is great), are falling apart, garbage and leaves are always on them, the paint on the railings are peelings, while a parking lot across the street has tons of garbage on the outside that they never clean up.

Vacant lots and houses are used for dumping grounds and the city refuses to deal with the owners of such property. The former Mary Immaculate Hospital sits vacant for years with broken windows, graffiti, garbage, squatters and nothing happens to that owner of that building (NY1 did a story as well last night on that). I have been trying to get the city to fix a broken sidewalk in front of a vacant lot next to me for several years and to this day the sidewalk is still broken and nothing happens to the owner, in fact he is now building the typical three story third world immigrant apartment on that lot, but yet the sidewalk is still broken and in years he had rarely come out to clean all the garbage that was being dumped in front of it.

Thousands of quality of life violations in Jamaica and this is who the city goes after, a quality restaurant who just opened a year ago, that just wants to bring a nice sit-down restaurant to the area, that the leaders are always complaining we don't have and then they have to deal with this nonsense.

A bunch of bullshit. And where the fuck are Marshall, Comrie, Wills and the rest of the useless local leaders who always make sure they are ready for their close-up for some bullshit street naming ceremony or some ribbon cutting crap?

What a beautiful photo of downtown Jamaica. I thought there was a street cleaning crew hired out by the Jamaica BID? Joe, is this block part of the Jamaica BID

First it's all of that street garbage and now it's fires...
not exactly a good ad for living in Jamaica.

And, of course, DOB just sits there on their asses.

The sign-painting businesses don't know the law and inform their customers of what they can or cannot put on the signs?

They only give fines to people they know will likely pay them.

Scumbags and parasites get free fun.

I think they are trying to stop signs from being too garish.

What that is - is a matter of debate.

But what they enforce is spotty.

The sign looks just fine...who should really be getting fined are those asians in flushing who dont have any english on their signs! Last time I checked, the law stated that all signs must be written in 50 percent english!

This area has no BID, in fact all of Hillside has no BID, only Jamaica Avenue and Sutphin Blvd have their own BIDS.

Rocoto's food is very good by the way and their service is amazing. Great people.

I think they are trying to stop signs from being too garish.

Bullshit, there is nothing garish about that sign or any of the other ones for that matter. With a thousand quality of life violations in this area, including illegal apartments, abandon cars on streets and garbage, this is just utter nonsense. There is no rhyme or reason for this, especially when tons of "bedbug signs and "Cash for your house or car" signs are posted on street posts, telephone poles, street signs and fences. Go after actual violators of quality of life. Leave legit quality businesses alone.

Not to fear guys. I'm sure your new Mayor, Bill Sandinista Duh Blazio is going to fix everything. And I'm sure we're not going back to the Summer of Sam 1977, and those wonderful Bad Old Days!

Oh how I wish !
Summer of Sam 1977 was much better then the 3rd world related shit we have to deal with now. During summer of Sam 1977 everybody was looking out for each other, half the population had "ready to go" guns, pipes & bats in there cars and hallways. Aside the Bushwick fires crime fell 90% overnight. All the crooks & junkies were scared to death.

Its going to get much worse under Sandinista DeBlazio. The guys a worse tweed hugger then the John Lindsay & Kennedy/Johnson administration combined.
If you own a 2 family zoned private home with "unused space" get ready for a BIG surprise !!

Street people and illegals aren't worth going after for fines - they are outside law and civilization.

Sorry Joe, but those signs are ghetto. Signage says a lot.

Happy colors and graphic depictions of gaudy jewelry and eyebrow threading and tat parlors and palm trees and the like are decreasing in the rest of the city as they relentlessly spread in Queens.

Add to this visual nightmare are incomprehensible text or characters often misspelled (when they make a stab at English).

You cannot change people's negative perception of these styles.

I believe that this side of Hillside Avenue will fall within Daneek Miller's district. The restaurant owners should contact Mr. Miller and urge him to change the code regarding business awnings.

After they meet with Mr. Miller, let the Queens Crap readership know what he says.