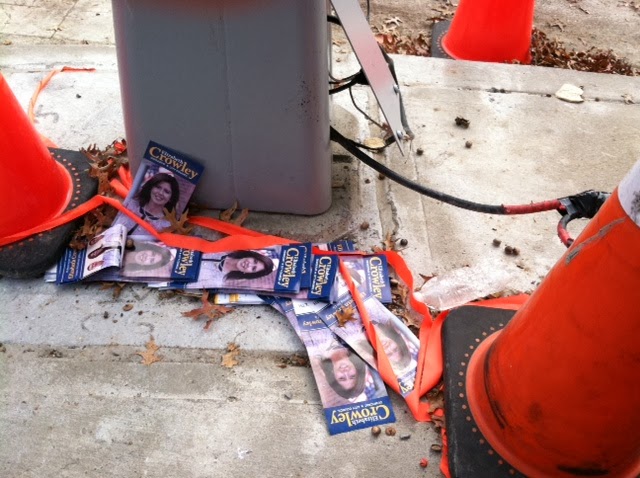 I'm not sure who to contact about this, please excuse me if you're not the one I should bother about this.

At approximately 12:30 p.m. today (Thursday, November 7, 2013) I almost slipped on a dump pile of Elizabeth Crowley election pamphlets on the corner of 80th Street and Juniper Park South.

The pamphlets were dumped in the same spot her poll worker was standing at on Election Day, Tuesday, November 5, 2013.

The garbage is not strewn all over the place like it was yesterday (regrettably, I didn't get a picture of it yesterday). Someone has pushed it over to the side, possibly to prevent schoolchildren and others from slipping on it.

I'm very disappointed in Elizabeth Crowley's shocking level of disrespect to all the volunteers who work so hard to keep Juniper Vally Park clean.

I'm alarmed that Crowley does nothing when her garbage places the park at risk of a lawsuit for a potential slip and fall. 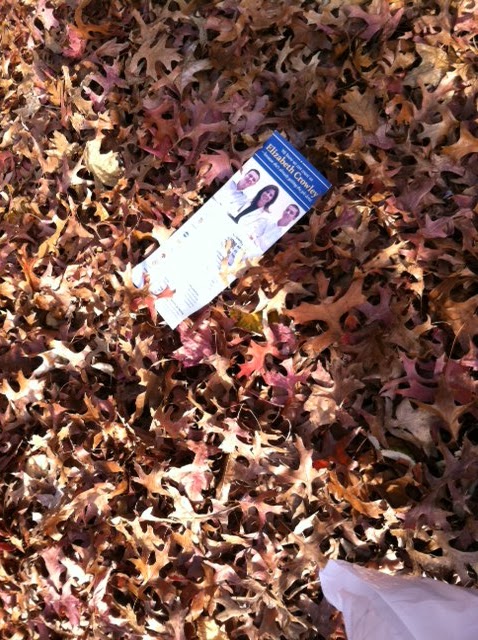 Crowley lawyer, Dominick Dale, was called on Wednesday to let him know that campaign trash was left on the corner of Juniper Blvd South and 80th St. He said he would take care of it. On Saturday it was still there blowing all over the neighborhood.

This is what we can expect in her second term.

Anonymous
Posted by Queens Crapper at 12:39 AM

That's the typical response you get from her office. Ignore the caller, and eventually they'll stop calling.

Clean up your mess, woman!

As we saw during the debate, this woman doesn't think she is responsible for anything, including her own behavior. So this offers little in the way of surprise.

This is why I'm so surprised that she got re-elected! I guess everyone who voted for her still don't get it. It will be another 4 years of neglect to Middle Village.

LOL!
But Who did she "BLOW" get where she is today?

As long as Liz keeps her looks, which can't be much longer,, all she has to do is whistle to have the ruling Dem politicos eating from her hand.

"You know how to whistle, donctha?
Just put your lips together and blow"!

Wait a minute. These pamphlets actually make for good mulch. Leave them there and in the spring perhaps a BS tree will grow.

Not the first time, and certainly won't be the last. She's got stamina enough to take on all comers.

New nickname for Dizzy Lizzy - "Teflon Liz" since nothing negative seems to stick on her. Just look at what happened at the re-election - even with the much publicized debates and lack of results during her 1st term, she still got re-elected!

Sounds like business as usual. She gets another term and a salary on our dime and we get what we usually get -- nothing -- no representation. That's what you all get for voting for her. You get the government you deserve.

Everyone here is complaining but yet she won reelection, how is that. You know what? You wanted her, you for her, now shut up

We had an election and now her constituents must be punished.

Get a 30 gallon garbage bag (3-4 mils). Put her garbage in it. Go over to her office and dump contents on a desk and say "I found Ms Crowley's literature in the park and thought you would appreciate my returning it."

You'll get the Good Citizen's Award at the next meeting of the Community Board.

Round them all up and re-run through a printer adding big gold letters "Chicka $10" with her phone number.
Leave them outside liqueur stores and bodegas on Roosevelt ave. 80% of illegal immigrant males love whores, male tyranny's and all forms of booze.

That's one idea however the other side of me says let these jackasses and sheeple who keep re-electing these assholes her get what the deserve. Especially those in MV, Glendale, Bayside and Whitestone
All small homeowners who do not live on land-marked streets need to concentrate on selling and getting out of NYC ASAP...Now an emergency.

We had our chance, and we blew it.

Ask not what the Department of Sanitation can do for you. Ask what you can do in place of the DOS.

Crowley should have been dumped. The next best thing to do is dump in front of her door.

Tell ya what folks, those local "weaklies" y'all love to hate gave Caruana excellent coverage, equal to or greater than what she got ... One of them endorsed him ... at least one other put the debate on the front page and also had a story on the Citizens Union endorsement mess ... and she still won by a safe margin.

Ya gonna keep pretending the power of the pols all stems from the papers not doing things exactly as you think they should be done? They don't all answer to the Democratic Party.